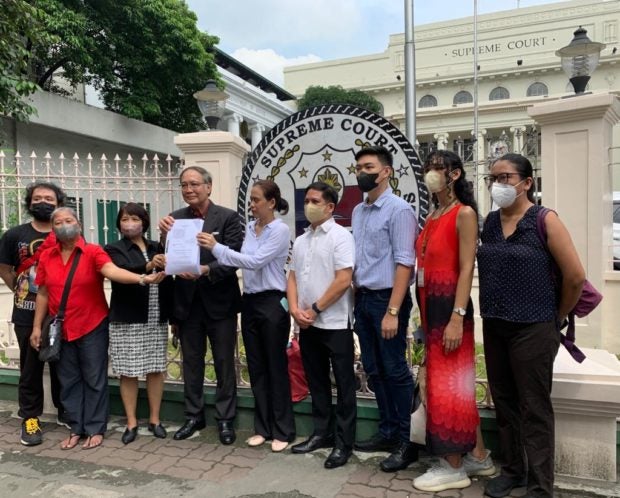 Petitioners pose for a photo outside the Supreme Court in Manila. – A petition was filed on Tuesday, October 4, 2022, asking the SC to cite Lorraine Badoy for indirect contempt for threatening Manila Regional Trial Court Judge Marlo Magdoza-Malagar. INQUIRER.net/Tetch Torres-Tupas

“We are filing today a petition for indirect contempt for several posts concerning the resolution of judge Malagar. Considering the gravity of the offense, we believe that it should be punishable with indirect contempt,” said Atty. Rico Domingo, former Philippine Bar Association (PBA) president.

The 35-page petition asserted that Badoy’s statements aimed to “assault and humiliate” Magdoza-Malagar after she dismissed the government’s bid to declare the Communist Party of the Philippines-New People’s Army (CPP-NPA) as a terrorist organization.

In her social media post, Badoy called Magdoza-Malagar an “idiot judge” who lawyers for the CPP-NPA. She also made a hypothetical situation about her “killing” the judge but she can beg for leniency as it was done because of her political belief. The post has since been deleted and denied.

Badoy, in a separate post, asked why Magdoza-Malagar was “so well-versed” about the Constitution of the CPP-NPA that only the group’s members should supposedly know. She also mentioned human rights lawyers Edre Olalia, Maria Sol Taule, and Rachel Pastores, asking if they were the ones who wrote her decision.

He said more than 60 lawyers since 2016 and over a hundred journalists since 1986 had been killed.

“‘Pag hindi natin nai-stop ito, bukas mayron na namang babarilin. Mayroon na namang a-ambushin. We cannot just sit idly on this. We have to do something more forceful about this and that is why we are going to the Supreme Court,” he added.

Magdoza-Malagar is not the only target of Badoy’s hostile and threatening remarks, the petitioners said, citing the vitriolic and hateful statement of the former National Task Force to End Local Armed Conflict (NTF-Elcac) spokesperson against Hukom Inc., which condemned Badoy’s statement against the judge.

“Evidently unsatisfied with the threatening remarks against Judge Magdoza-Malagar, Respondent Badoy-Partosa has commenced adding more fuel to the fire as she unabashedly directs her vitriol and hates against all members of the Philippine judiciary as well as the members of the legal profession who do not agree with her statements,” the petition reads, adding that there is nothing in Badoy’s statements that could be categorized as fair and bonafide criticism of a public official’s conduct.

“It is slanderous, abusive, unfair, and criminal. Respondent has threatened the life of Judge Malagar and her husband, subjects them to slanderous accusations, and through her actions, called on the public to do the same. This is truly detrimental to the independence of the judiciary and grossly violative of the duty of respect for courts,” the petition also points out.

The petition further said Badoy’s propensity to belittle and ridicule the judiciary is “downright contemptuous” as it showed that there is nothing that would stop her mockery and condemnation of the justice system until she is held liable by the SC.

Given the gravity and hostility displayed by Badoy, the petitioners asked the high court to mete her the maximum imprisonment of six months and fine in the maximum amount of P30, 000.

Domingo said it was not the penalty they were after but rather the gravity and the ominous danger to the independence of the country’s judicial systems posed by such threats and vilification.

“Otherwise, there will be chaos,” he added.

The lawyers who filed the petition are part of the Movement Against Disinformation, of which human rights group, Karapatan is also a convenor.