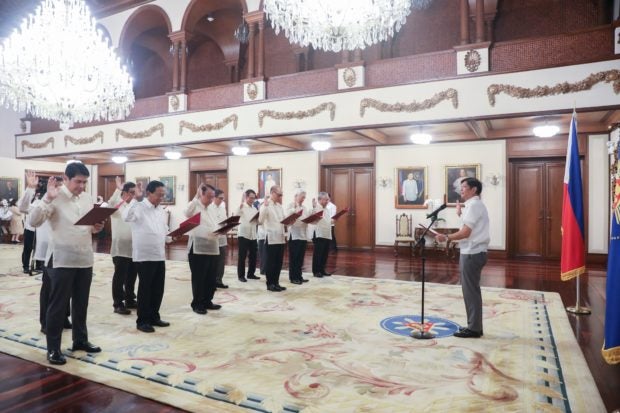 Photo from Office of the Press Secretary Facebook page

Malacañang said the oath-taking was held at the Palace, with newly appointed Executive Secretary Lucas Bersamin leading the list of Cabinet members swearing in for office.

Bersamin replaced Atty. Victor Rodriguez, who stepped down from the post earlier, citing the need to focus on his family.

Marcos had to reappoint some of his Cabinet members after the Commission on Appointments (CA) bypassed the nomination of 14 Cabinet officials to attend to pressing legislation before Congress started its recess.

Among the nominees who were bypassed were Press Secretary Trixie Cruz-Angeles and Secretary of the Department of Communications and Information Technology Ivan John Uy. Their names were not included on the list of those who were reappointed and took the oath on Tuesday.