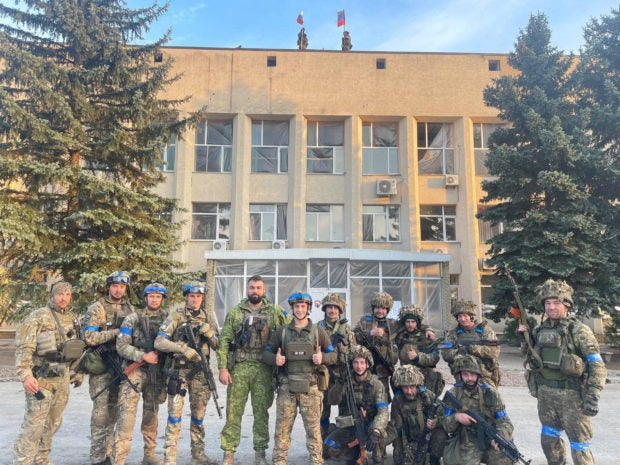 Ukrainian troops pose for a photo in Lyman, Ukraine in this picture released in social media October 1, 2022. (REUTERS)

KYIV  – Ukraine on Sunday claimed full control of the eastern logistics hub of Lyman, its most significant battlefield gain from Russia in weeks, providing a potential staging post for further attacks to the east while heaping further pressure on the Kremlin.

The stinging setback for Russian President Vladimir Putin was delivered after he proclaimed the annexation of four regions covering nearly a fifth of Ukraine on Friday, an area that includes Lyman. Kyiv and the West have condemned the proclamation as an illegitimate farce.

NATO Secretary General Jens Stoltenberg said the capture of the town, where Ukrainian flags were raised over civic buildings on Saturday, demonstrated that Ukraine is capable of dislodging Russian forces and showed the impact Ukraine’s deployment of advanced Western weapons was having on the conflict.

Ukrainian President Volodymyr Zelenskiy said on Sunday that the success of the country’s soldiers was not limited to the recapture of Lyman.

Ukraine forces have liberated the small Arkhanhelske and Myrolyubivka settlements in the Kherson region as well, he said.

Reuters was not able to immediately verify the reports.

Russia’s defence ministry said on Saturday that it was pulling troops out of the Lyman area “in connection with the creation of a threat of encirclement”.

It did not mention Lyman in its daily update on fighting in Ukraine on Sunday, although it said Russian forces had destroyed seven artillery and missile depots in the Ukrainian regions of Kharkiv, Zaporizhzhia, Mykolaiv and Donetsk.

Zelenskiy said the abduction of the director-general of Ukraine’s Russian-occupied Zaporizhzhia nuclear power plant is an act of Russian terror.

A Russian patrol detained Ihor Murashov on Friday, the state-owned company in charge of the plant said on Saturday, and the International Atomic Energy Agency said Russia had confirmed the move.

“This is another instance of clear act of Russian terror, for which the terrorist state must bear an ever-increasing punishment,” Zelenskiy said in his nightly video address.

The Ukrainian military said in its evening statement on Sunday that its forces had repelled Russian advances in several areas – particularly in Donetsk region near Bakhmut and Spirne, just inside Donetsk region near Lysychansk, a major centre in neighbouring Luhansk region.

Russian forces had captured Lyman from Ukraine in May and had been using it as a logistics and transport hub for its operations in the north of the Donetsk region. Its recapture by Ukrainian troops is Russia’s largest battlefield loss since Ukraine’s lightning counteroffensive in the northeastern Kharkiv region in September.

Lyman’s operational importance was due to its command over a road crossing over the Siverskyi Donets River, behind which Russia has been attempting to consolidate its defences, Britain’s Ministry of Defence said.

Russia likely experienced heavy casualties during the withdrawal, the ministry added. Russia had 5,000 to 5,500 troops in the town before the Ukrainian attack, a Ukrainian military spokesman said on Saturday.

The areas Putin claimed as annexed just over seven months into Russia’s invasion of its neighbour – Donetsk and Luhansk plus Kherson and Zaporizhzhia in the south – are equal to about 18% of Ukraine’s total surface land area.

Russia’s parliament is to consider on Monday bills and ratification treaties to absorb the regions, the speaker of Russia’s lower house of parliament, Vyacheslav Volodin said.

A pomp-filled Kremlin signing ceremony with the regions’ Russian-installed leaders on Friday has failed to stem a wave of criticism within Russia of how its military operation is being handled. Britain’s defence ministry said that was likely to intensify with further setbacks.

Putin ally Ramzan Kadyrov, the leader of Russia’s southern Chechnya region, on Saturday called for a change of strategy “right up to the declaration of martial law in the border areas and the use of low-yield nuclear weapons.” Washington says it would respond decisively to any use of nuclear weapons.

The United States was “very encouraged” by Ukrainian gains, Defense Secretary Lloyd Austin said on Sunday, while NATO’s Stoltenberg said the fall of Lyman demonstrated the effectiveness of Western weapons in the conflict.

“Allies are stepping up their support to Ukraine and that is the best way to ensure that … Ukraine is actually able to liberate and retake occupied territory,” Stoltenberg said in an NBC interview.

Pope Francis on Sunday made an impassioned appeal to Putin to stop “this spiral of violence and death” in Ukraine and also called on Zelenskiy to be open to any “serious peace proposal”.

Zelenskiy said on Friday that peace talks with Russia while Putin was still president would be impossible. “We are ready for a dialogue with Russia, but with another president of Russia,” he said.