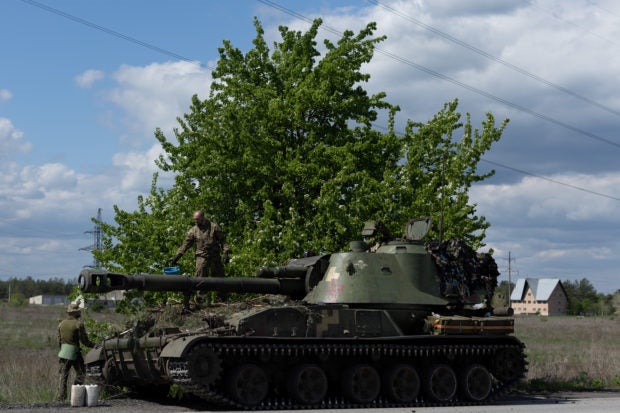 Ukrainian soldiers stand on the top of a tank, amid Russia’s invasion of Ukraine, in the frontline city of Lyman, Donetsk region, Ukraine April 28, 2022. (REUTERS)

WASHINGTON  – U.S. Defense Secretary Lloyd Austin on Saturday cheered Ukraine’s capture of the key bastion of Lyman from Russia in eastern Ukraine, saying it was an encouraging battlefield success that would create new dilemmas for Russia’s military.

Russia had used Lyman as a logistics and transport hub for its operations in the north of the Donetsk region. Its capture is Ukraine’s biggest battlefield gain since a lightning counteroffensive in the northeastern Kharkiv region last month.

Austin noted that Lyman was positioned across supply lines that Russia has used to push its troops and materiel down to the south and to the west, as the Kremlin presses its more than seven-month-long invasion of Ukraine.

“And without those routes, it will be more difficult. So it presents a sort of a dilemma for the Russians going forward,” Austin said.

“And we think the Ukrainians have done great work to get there and to begin to occupy the city.”

Ukraine’s recent successes have infuriated Putin allies such as Ramzan Kadyrov, the leader of Russia’s southern Chechnya region, who called for “more drastic measures” – to include the use of low-yield nuclear weapons.

The capture came just a day after Putin proclaimed the annexation of four Ukrainian regions – including Donetsk, where Lyman is located – and placed them under Russia’s nuclear umbrella. The proclamation of Russian rule over 15% of Ukraine was roundly rejected by Ukraine and Western countries as illegal.

Austin did not say whether he thought Ukraine’s capture of Lyman might prompt Russian escalation, although U.S. officials have widely denounced Russia’s nuclear rhetoric in recent days.

“What it means in terms of potential escalation, I won’t speculate on that. But what it does mean for the battlefield is that the Ukrainians continue to make progress,” Austin said.

“They continue to present problems to the Russians that they’ll have to resolve. And again, we all have to be encouraged by what we’re seeing.”