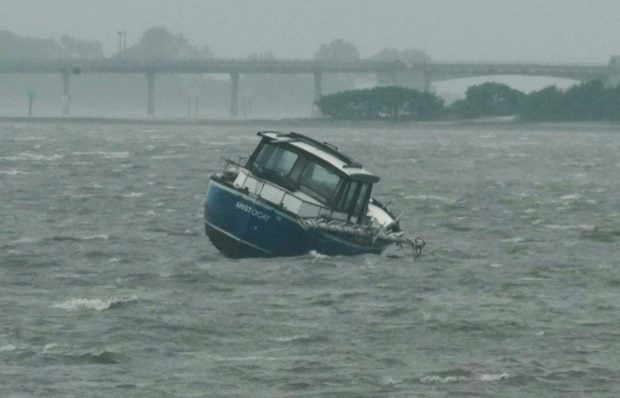 A boat rocks in the waves in the Gulf of Mexico in Dunedin, Florida ahead of Hurricane Ian making landfall on September 28, 2022. AFP

MEXICO CITY — Hurricane Orlene strengthened into a “major” hurricane early Sunday as it moved toward Mexico’s Pacific coast where it is expected to hit in the coming days, the National Meteorological Service said.

“Orlene has intensified to a Category 3 hurricane on the Saffir-Simpson scale,” causing heavy rains and strong winds, the agency said in a statement.

The storm “has become a major hurricane” and is moving with sustained winds of 115 miles per hour (185 kilometers per hour), the US National Hurricane Centre (NHC) warned in its latest advisory.

The NHC added that the “center of Orlene” was expected to “reach the coast of mainland Mexico” on Monday.

Mexico’s Civil Protection office cautioned on Twitter that the country’s Pacific coast could be hit by heavy rains as well as “strong winds and high waves,” urging residents to take shelter at temporary facilities.

Hurricanes tend to strike both the Pacific and Atlantic coasts of Mexico in a season that lasts from May to November.

In October 1997, Hurricane Paula barreled into the Pacific coast as a Category 4 storm. It claimed more than 200 lives.

How hurricane categories forecast the scale of destruction