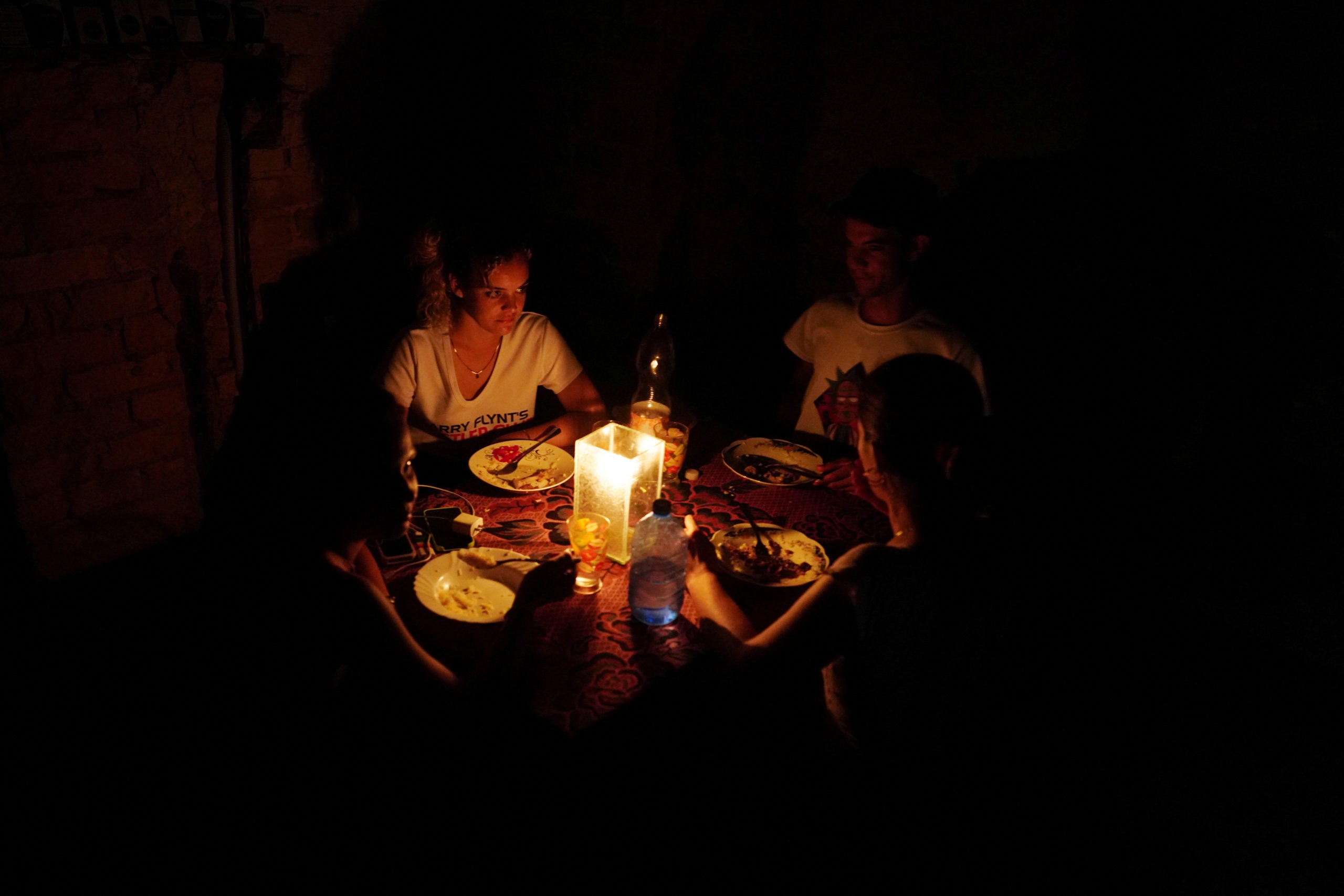 FILE PHOTO: A family has dinner during a blackout in the aftermath of Hurricane Ian in Havana, Cuba, September 28, 2022. REUTERS/Alexandre Meneghini

HAVANA  — Cubans banged pots and shouted protests in neighborhoods of Havana still without electricity on Friday, three days after Hurricane Ian knocked out power to the island of 11 million people.

Sweating in the dark on Thursday night and early Friday, some Havana residents resorted to pot-banging, a traditional method of expressing discontent in Latin America but one previously rarely employed in Cuba.

The government has worked on repairs since then, and electric service was back in half of the capital by Friday afternoon.

Jorge Luis Cruz of Havana’s El Cerro neighborhood stood shirtless in his doorway late on Thursday banging a pot and shouting in anger. Dozens of other people could be heard banging pots in the darkness from terraces and rooftops nearby.

“This isn’t working: Enough of this,” Cruz told Reuters. “All my food is rotten. Why? Because we don’t have electricity.”

Cruz said his family did not want him to take to the street out of fear he would be hauled off to jail.

“Havana today has more than 50% of its grid recovered, and about 60% of customers have electricity,” Torres said.

By midday Friday, scattered protests continued in Havana, but largely limited to areas where electricity was not yet back.

“I believe that protesting is a right, but only when those responsible are not doing their jobs,” Torres said. “Yesterday´s protests, instead of helping, slowed down our mission.”

Police arrested more than 1,000 people, according to estimates from human rights groups, and hundreds of protesters remain in jail, official figures show.

The Cuban government says those it jailed were fairly tried and found guilty of vandalism, assault and in some cases, sedition. Human rights groups, however, say people were subjected to sham trials and unfairly jailed for exercising their right to free speech and protest.

A Reuters journalist confirmed pot-banging and small groups protesting peacefully on the street in several other areas of the city on Thursday evening and Friday morning. In Vedado, a more upscale neighborhood, around 100 people gathered in front of a local Communist Party office late Thursday.

Two uniformed government officials emerged, one with a loudspeaker, to explain efforts to restore power, but the crowd quickly shouted them down.

Food, fuel and medicine shortages, acute even before the storm, left many Cubans wondering where to turn as many businesses remained closed following the storm and basic supplies were hard to come by.

Reports on social media also showed small protests throughout Havana and some elsewhere in the country on Friday. Outside Havana, many regions remained without power, particularly on the western half of the island, which took a direct hit from Ian.

As protests began on Thursday evening, internet communications, by cell phone and landline, went down for about seven hours, according to global monitoring firm NetBlocks.

“The internet blackout limited voices from the protests and may well have an element of intent given that there was no external factor registered at that moment that caused the outage,” Alp Toker, NetBlocks director, told Reuters.

“The incident is consistent with the pattern of disruptions we have tracked during previous periods of political unrest.”

The Cuban government did not reply to a request for comment on the outage. Internet service appeared to have returned to normal across most of the city on Friday.

But residents, frayed by tropical heat and abundant mosquitoes, remained on edge.

“We still don’t have light, and no one tells us why,” said Tiare Rodriguez, 54, a resident of Havana’s 10 de Octubre neighborhood. She had joined a small group that was banging pots and milling about the street, too hot to remain in her home.

“Our food is going to waste. Our children’s milk has been lost. Who will replace it?” she said. ”