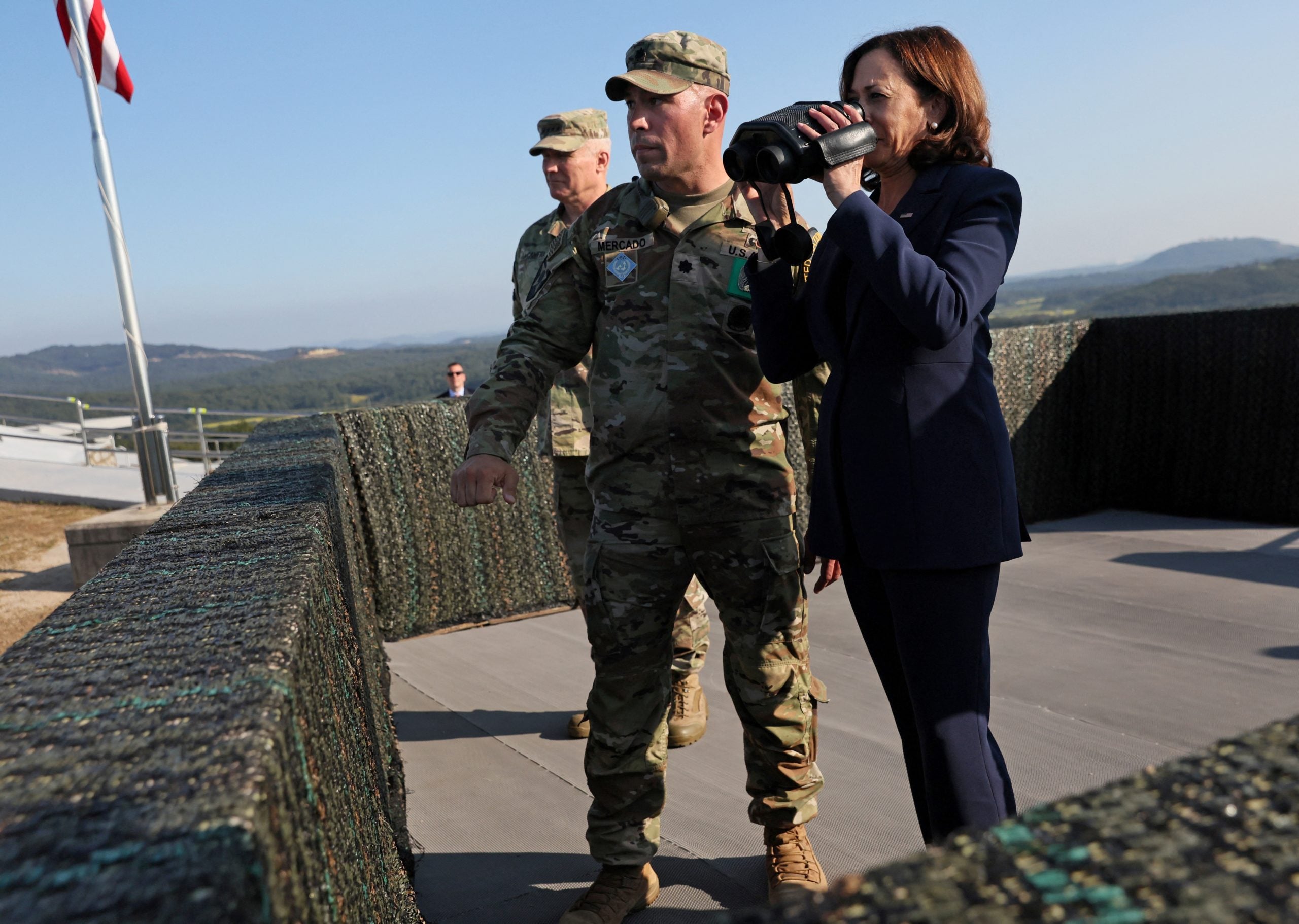 US Vice President Kamala Harris (R) uses a pair of binoculars while being briefed by a member of the military at a military operation post as she visits the demilitarized zone (DMZ) separating North and South Korea, in Panmunjom on September 29, 2022. (Photo by Leah MILLIS / POOL / AFP)

South Korea, Japan and the U.S. staged anti-submarine drills Friday — the first in five years — just days after Washington and Seoul’s navies conducted large-scale exercises in waters off the peninsula.

US Vice President Kamala Harris was in Seoul Thursday and toured the heavily fortified Demilitarized Zone that divides the peninsula, on a trip that aimed to underscore her country’s “ironclad” commitment to South Korea’s defence against the North.

With talks long stalled, Pyongyang has doubled down on its banned weapons programmes, conducting a record-breaking blitz of tests this year and revising its laws to declare itself an “irreversible” nuclear power.

South Korea’s military said it had “detected two short-range missiles between 0645 and 0703 fired from the Sunan area in Pyongyang into the East Sea,” referring to the body of water also known as the Sea of Japan.

The missiles “flew approximately 350 km (217 miles) at an altitude of 30 km at speed of Mach 6”, Seoul’s Joint Chiefs of Staff said in a statement, calling the launches “a serious provocation.”

Experts say the irregular trajectories indicate the missiles are capable of manoeuvring in flight, making them harder to track and intercept.

The US Indo-Pacific Command said in a statement that the latest launch “highlights the destabilising impact of the DPRK’s unlawful WMD and ballistic missile programs”, using the official abbreviation for North Korea.

North Korea marked Harris’s trip to Seoul with a flurry of missile launches — firing off short-range ballistic missiles on Sunday, Wednesday and Thursday, the latter test just hours after the vice president flew out of South Korea.

Washington has about 28,500 troops stationed in South Korea to help protect it from the North.

Under South Korea’s President Yoon Suk-yeol, who took office in May, the two countries have boosted joint exercises, which they insist are purely defensive.

Just before Harris arrived in Seoul, Washington sent the nuclear-powered USS Ronald Reagan aircraft carrier to South Korea to conduct a large-scale joint naval exercise in a show of force against Pyongyang.

Such drills infuriate North Korea, which sees them as rehearsals for an invasion.

North Korea is “rapidly modernizing weapons and taking advantage of a world divided by US-China rivalry and Russia’s annexation of more Ukrainian territory,” he said.

South Korean and US officials have been warning for months that North Korean leader Kim Jong Un is preparing to conduct another nuclear test.

On Wednesday, the South’s spy agency said North Korea’s next nuclear test could happen in the window between China’s upcoming party congress on October 16 and the US midterm elections on November 7.

That assessment was in line with one offered Friday by a US official, who said such a test would likely take place one to two weeks after the congress.

Admiral Sam Paparo, head of the US fleet in the region, said in Honolulu that any such test would be a “matter of grave, grave concern”, and would prompt a US response spanning “multiple instruments of national power”.

North Korea, which is under multiple UN sanctions for its weapons programmes, typically seeks to maximise the geopolitical impact of its tests with careful timing.

The isolated country has tested nuclear weapons six times since 2006, most recently in 2017.

“If North Korea attempts to use nuclear weapons it will face a resolute and overwhelming response from our military and Korea-US alliance,” he said in a speech marking Armed Forces Day.