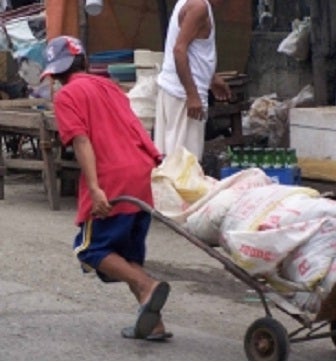 MANILA, Philippines – The Quezon City government has formed a task force to protect minors in the city from forced labor and abuse, it said on Saturday.

“Task Force Sampaguita” according to the city government, was formed after an uptick in the number of children selling sampaguita garlands in the city was observed during a joint surveillance activity by the Quezon City Public Employment Service Office and by the Quezon City Social Services Development Department.

“Children selling sampaguitas (garlands) have become more prevalent and are expected to increase as the Christmas season nears. It was also revealed that the majority of children profiled were from other LGUs (local government units),” the Quezon City government said.

Mayor Joy Belmonte, who created  Task Force Sampaguita, will serve as its chairperson.

(Because of a hard life, children are forced to work instead of studying. The city government is here to assist and support their families by giving them different forms of help and services).

The task force will have a policy framework that will profile street children and their families.

Task Force Sampaguita will craft a local action plan based on the guidelines of Republic Act 7610 as amended by RA 9231 or the Special Protection of Children Against Abuse, Exploitation, and Discrimination Act, Presidential Decree No. 1563 or the Anti-Medicancy Law, and other related legislative measures.

The task force is also developing a referral system with relevant agencies like the Department of Social Welfare and Development, as well as with the other LGUs where the street children came from.