DepEd needs P 1.17B to fix schools hit by Karding 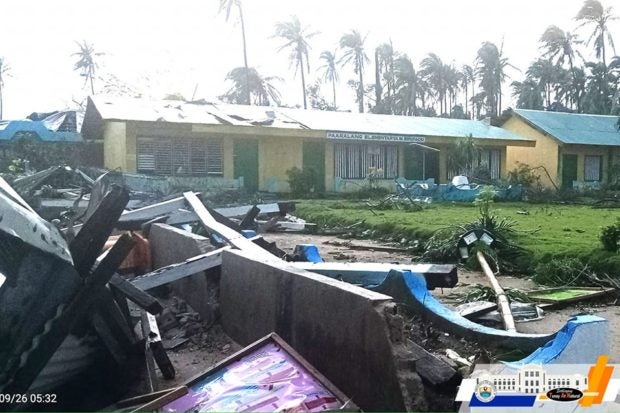 Aftermath of #KardingPH in Burdeos municipality on the Polillo Island, Quezon, where the typhoon made landfall Sunday evening, Sept. 25. | PHOTO: Kevin Morillo via Provincial Government of Quezon

MANILA, Philippines — At least P1 billion is needed to repair all the schools, which are damaged or destroyed by Supertyphoon “Karding” (international name: Noru), according to the Department of Education (DepEd).

In a joint presser on Friday with the Office of the Vice President, Michael Poa, spokesperson for the DepEd, said the estimated cost for the reconstruction or rehabilitation of the 165 schools was pegged at P1.17 billion.

Of the damaged schools, 386 classrooms were destroyed.

Back to blended learning

The cost of repairs jumped more than 10 times since Sept. 26 when the DepEd said it needed P112 million to repair only 20 schools from the six regions, which reported damage due to the supertyphoon.

According to Poa, the usual protocol for schools, which sustained damage was for them to switch to either distance or blended learning.

“If this is not possible, what we are doing now is coordinating with various local governments to see if they have temporary spaces like covered courts and other rooms, which they can lend to us to hold classes for our learners,” he said.

According to DepEd figures as of Sept. 29, out of the total 561 schools used as evacuation centers when Karding hit the country, 92 schools were still being used to house displaced families.

Citing their experience following the magnitude 7 earthquake that hit Abra province in July, Poa also acknowledged that not all local governments could provide available spaces for learners.

With this in mind, he said, “We would again need to determine how many temporary learning spaces we need to build.”

According to Poa, the DepEd is collaborating with the private sector and other organizations to conduct a study on how to construct more disaster-resilient schools in the country. INQ