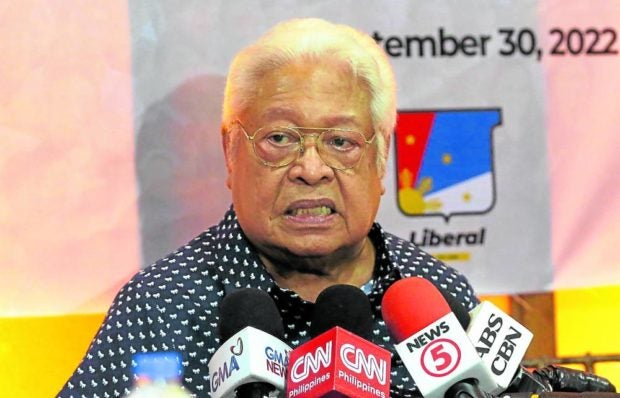 Accepting the challenge, Lagman vowed that the LP would be “at the forefront in fighting against oppression, repression and tyranny” while maintaining its development of “popular volunteerism.”

This early, he is casting an eye over the 2025 midterm elections, promising a return of LP to the political stage, after many of its members jumped ship to PDP-Laban and other parties allied with former President Rodrigo Duterte since 2016 or after the term of then President Benigno Aquino III.

At present, the LP has a total of 421 elected members, including 10 representatives, one governor, four vice governors, 26 provincial board members, 32 mayors, 36 vice mayors and 312 councilors.

“As your president, I am not ready to incant the requiem of the Liberal Party,” Lagman said. “I assume the presidency to lift up the Liberal Party from the ashes of the May 2022 elections.”

He also committed to open the party’s doors to possible alliances with groups and parties “with the same ideals, convictions and objectives.”

Following the election, the party approved a resolution recognizing the contributions of Robredo and Pangilinan to the party to nation building, and fighting for freedom and democracy.

As the new chair, Pangilinan brought up the “massive systemic disinformation,” as well as what he called the “erosion of democracy,” prompting him to remind party members of their “critical role” in defending the truth and human rights and upholding freedom.

“Being a farmer, I liken all our efforts to the sowing of seeds and at the right time, a bountiful harvest shall be our reward as well the reward for our people,” Pangilinan said. INQ