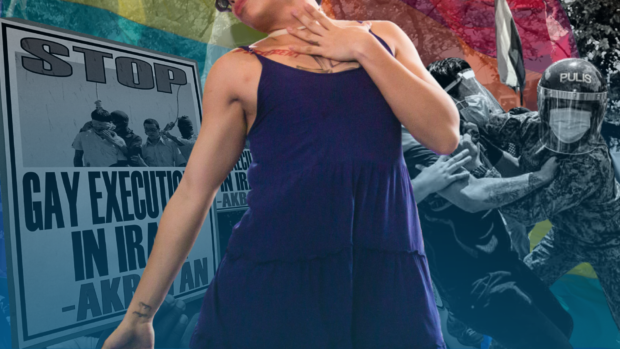 MANILA, Philippines—Last Wednesday (Sept. 28), the men’s basketball team of De La Salle University (DLSU) made a TikTok-inspired performance, which was perceived to be insensitive to the LGBTQ+ community.

Giorgina Escoto, president of the University Student Government (USG), said while she was not able to see the Pep Rally inside the school, La Sallian, the official student publication of DLSU, photographed the men cross-dressed.

The cross-dressing, she said, made many Lasallians, including herself, feel uncomfortable. “This is not the #SafeandInclusiveDLSU that we continue to lobby for,” she stressed.

“Yes, you are free to dress however you want, but people’s gender expression is not a source of entertainment. Not when so many people still face discrimination for it,” Escoto said.

LGBTQ+ rights group Bahaghari, which shared a video of the performance, echoed Escoto’s words, saying that men cross-dressing is not punchline since gender expression is not a joke.

“What others consider a simple punchline is a serious ordeal for LGBTQIA+ persons, who courageously fight ridicule and abuse daily for the right to self-expression,” it said on Facebook.

Back in 2019, the group Save the Children Philippines (SCP) called for the protection of the rights of the LGBTQ+ community, especially children who face higher risks of violence, like humiliation inside schools and homes.

Lawyer Albert Muyot, chief executive officer of SCP, said the rights of every child to gender identity and freedom of expression are protected by the Convention on the Rights of the Child.

But while the convention has been in effect in the last 30 years, SCP’s consultation with children from Southeast Asia revealed that many are still struggling from psychological violence and discrimination from families, schools, and communities. 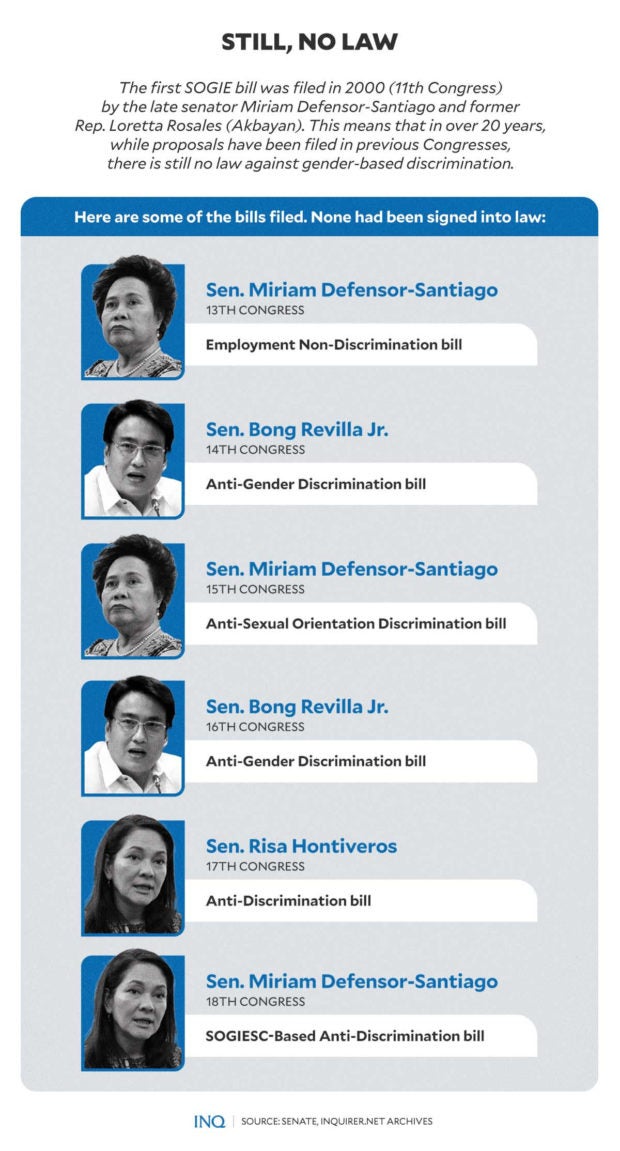 United Nations Children’s Fund (Unicef) said eight in 10 Filipino LGBTQ+ children have experienced physical and psychological violence, while more than a third reported that they were sexually violated.

Last year, the group Metro Manila Pride, citing data from the Trans Murder Monitoring Report of Transgender Europe, said 58 transgender persons have been killed in the Philippines from 2008 to 2020.

The group University of the Philippines Babaylan said “our gender expression is not a joke—not when many of us are discriminated [against], harassed, and even killed by staying true to who we are.”

Rey Valmores Salinas, chairperson of Bahaghari, had said: “It’s time for us to fight this culture of abuse, by passing a law to protect all of us from discrimination — the Sexual Orientaion, Gender Identity and Expression (SOGIE) Equality Bill.”

The bill was first introduced in 2000 (11th Congress) by the late Sen. Miriam Defensor-Santiago and former Rep. Loretta Rosales (Akbayan), but until today, it has not been enacted into law. 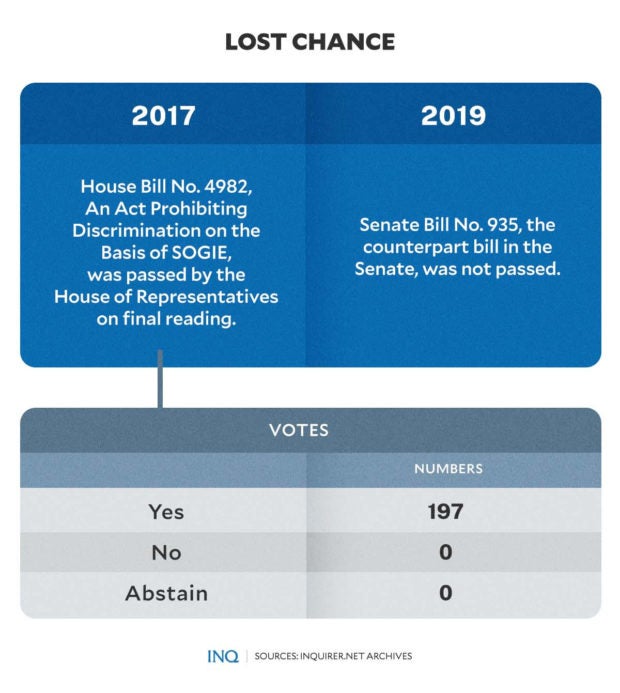 This means that in over 20 years, while proposals have been filed in previous Congresses, the Philippines, where 65 percent of people still find homosexuality “immoral,” still has no law against gender-based discrimination. 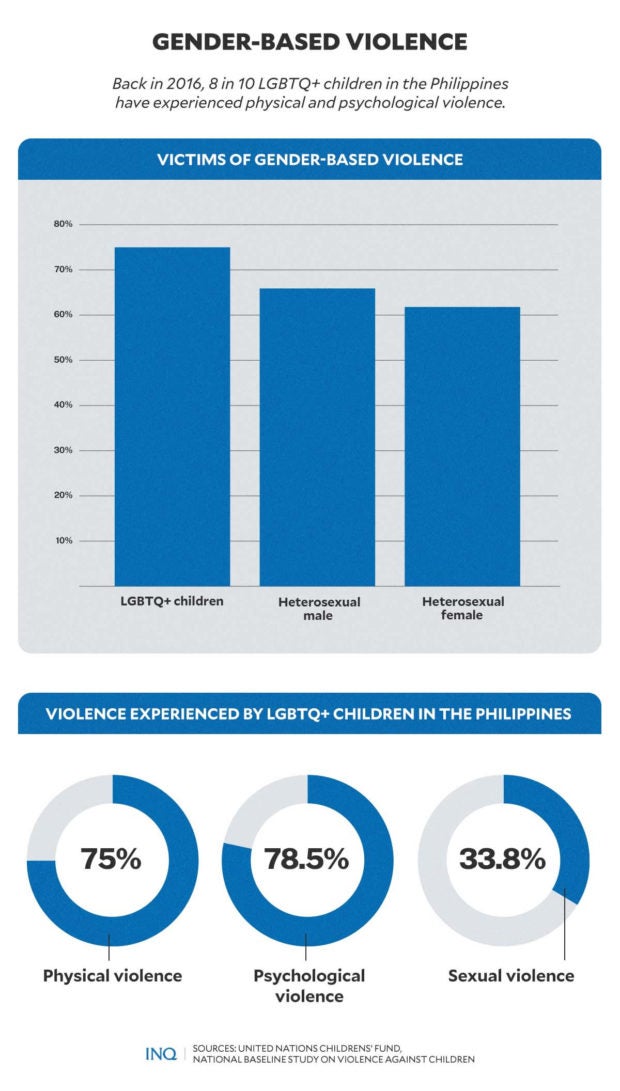 Back in 2017, a chance was seen with the passage of House Bill No. 4982 on final reading, but its counterpart, Senate Bill No. 935, which was sponsored by Sen. Risa Hontiveros, was not passed.

RELATED STORY: Hontiveros vows to push for SOGIE bill: ‘We’ll take this to the finish line’

Akbayan told INQUIRER.net that “we [have] filed religiously since 2000. We filed nine versions of the SOGIE Equality bill.”

‘We will take action’

Escoto said “I have raised this issue to the university administration. With the recent establishment of the DIVERSE Taskforce, we will make sure to take action on this.”

“This is a stark reminder that we have to strengthen the Safe Spaces Policy of the university,” she stressed.

Bahaghari is one with the LGBTQIA+ students of the De La Salle University in decrying messaging and jokes which demean the daily struggles of gays.

“We are more than willing to speak to the organizers and performers of the event for concrete steps in doing better, and in being conscious allies for equality.”