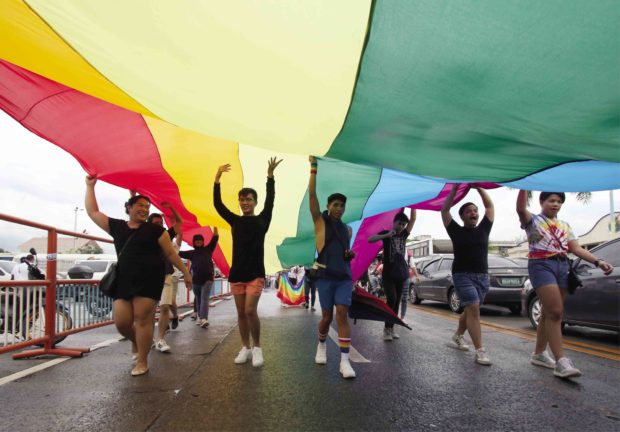 This was the “exasperating” question that shattered 20-year-old Nathaniel Rico’s desire to come out. It was in 2018, he was with his relatives for a family occasion.

“I was minding my own business then my uncle, who was drunk then, threw the question. Out of fear, I initially said I’m not. Left with no choice, I eventually came out that same night, disappointed,” he said.

This Pride Month, INQUIRER.net talked to Rico and three more members of the LGBTQ+ community—Joshua Colobong, Edrian Miranda, and Lucas (not his real name)—who shared the same reason in deciding to come out: “to ease the stress”.

Lucas (name withheld for personal reasons), 19, decided to come out when he was in Grade 11, saying that he revealed his identity to his father as he wanted to be out and proud before committing himself in a relationship again.

RELATED STORY: Being gay in PH: Living life to the fullest

Why? He said it was because it’s hard to keep his problems to himself. He expected that by coming out, the suffering would ease—that there’s no longer a need to keep his relationship a secret, that he can already share his problems and seek help.

This was shared by Colobong, too, saying that when he was in Grade 9 and felt that he was attracted to people of the same sex, he told himself that while he had an existential crisis regarding his identity then, he wanted to have his relationship introduced.

However, the person he was attracted to was likewise confused. While there was an initial plan to come out, he fell into distress and then cried. He said his father and aunt told him: “It’s fine. That’s the reality with girls.”

When he finally told them that it was not a girl, 20-year-old Colobong said “I’ve never heard silence this loud. They were silent, they did not know what to do, we did not talk about it.”

In 2020, the Anxiety and Depression Association of America said that 30 to 60 percent of lesbians, gays, bisexuals, transgenders, and queers deal with anxiety and depression: “That rate is 1.5 to 2.5 times higher than that of their straight counterparts.”

Unlike Rico, Colobong, and Lucas, who had to come out directly to their immediate relatives, Miranda only changed her profile photo on Facebook, with her wearing a beautiful dress.

While Miranda’s coming out story seemed to be easier than the rest, she said the next things that happened were not: “There are instances that I’m wearing a dress at our home, but my father would still ask me if I’m gay.” 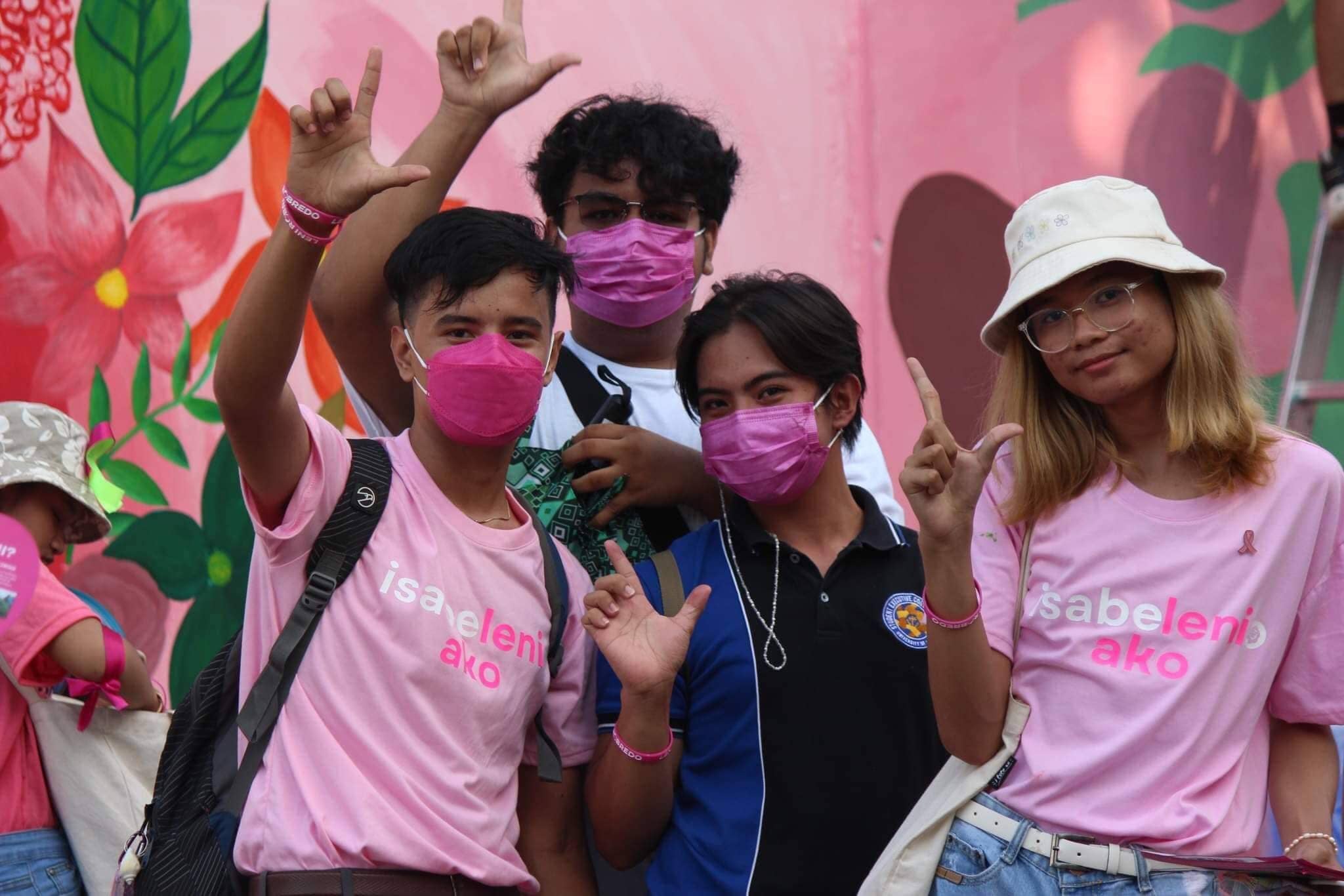 OUT AND PROUD. Edrian Miranda (right) takes part in an event in Isabela province in May while expressing his real self. PHOTO COURTESY OF EDRIAN MIRANDA/Facebook

Her story, she said, would prove that LGBTQ+ struggles persist even after coming out: “I can cross dress, but I can still feel that they do not like it. Their looks sends me the message that ‘I can be gay but I should not cross dress’.”

Rico shared the same experience, saying that while he felt having the confidence of expressing his real self, his relatives eventually told him: “Why are you like that now? You’re too gay already.”

He said this made him think that his coming out was just a waste. “It’s tiring to pretend. It’s hard that they cannot accept me completely. The worst part is that they even told me that if I’m gay, I should be decent.” 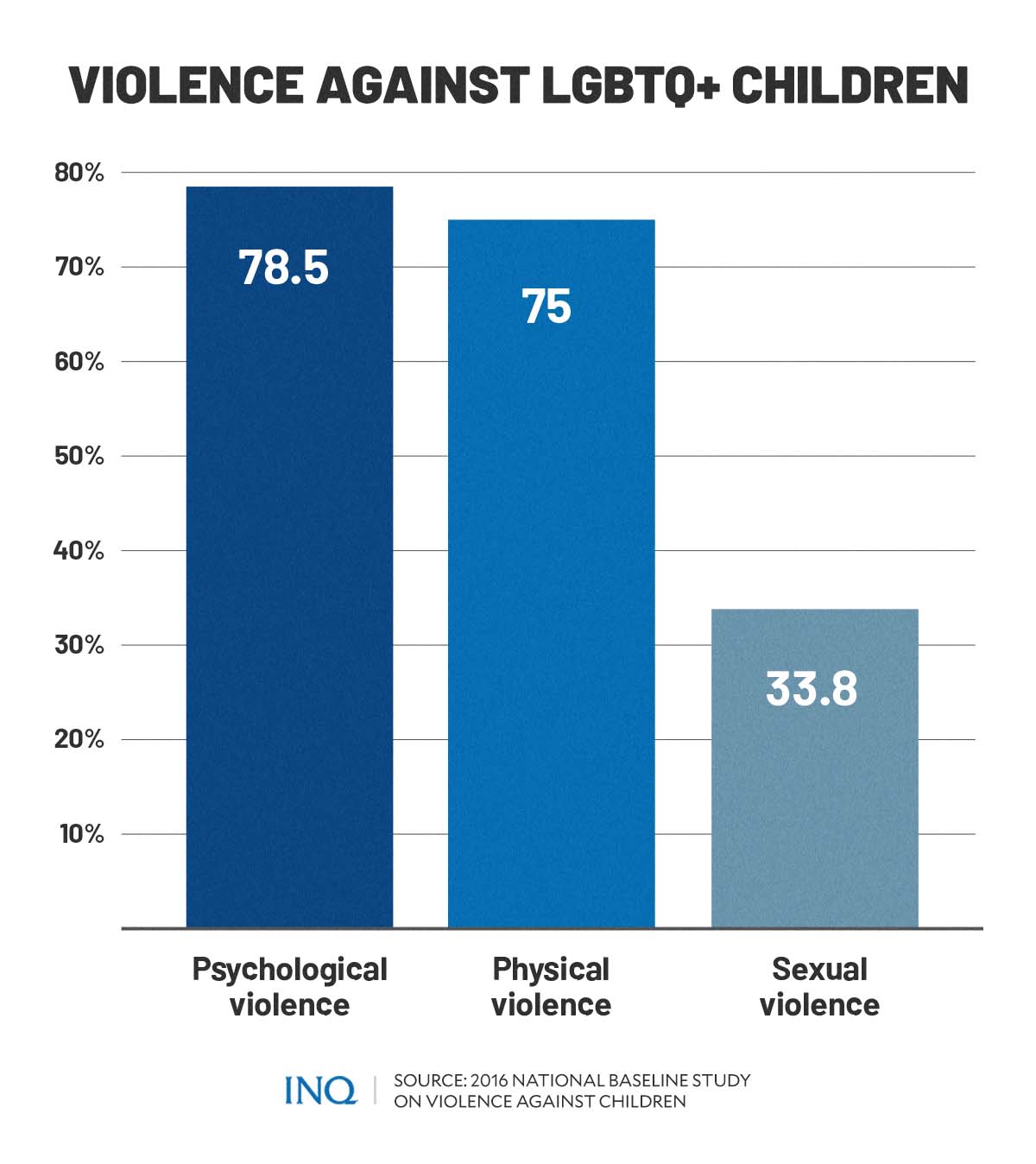 In 2019, Save the Children Philippines (SCP) has called for the protection of the rights of the LGBTQ+ community, especially children who face higher risks of violence, like humiliation at schools and home. 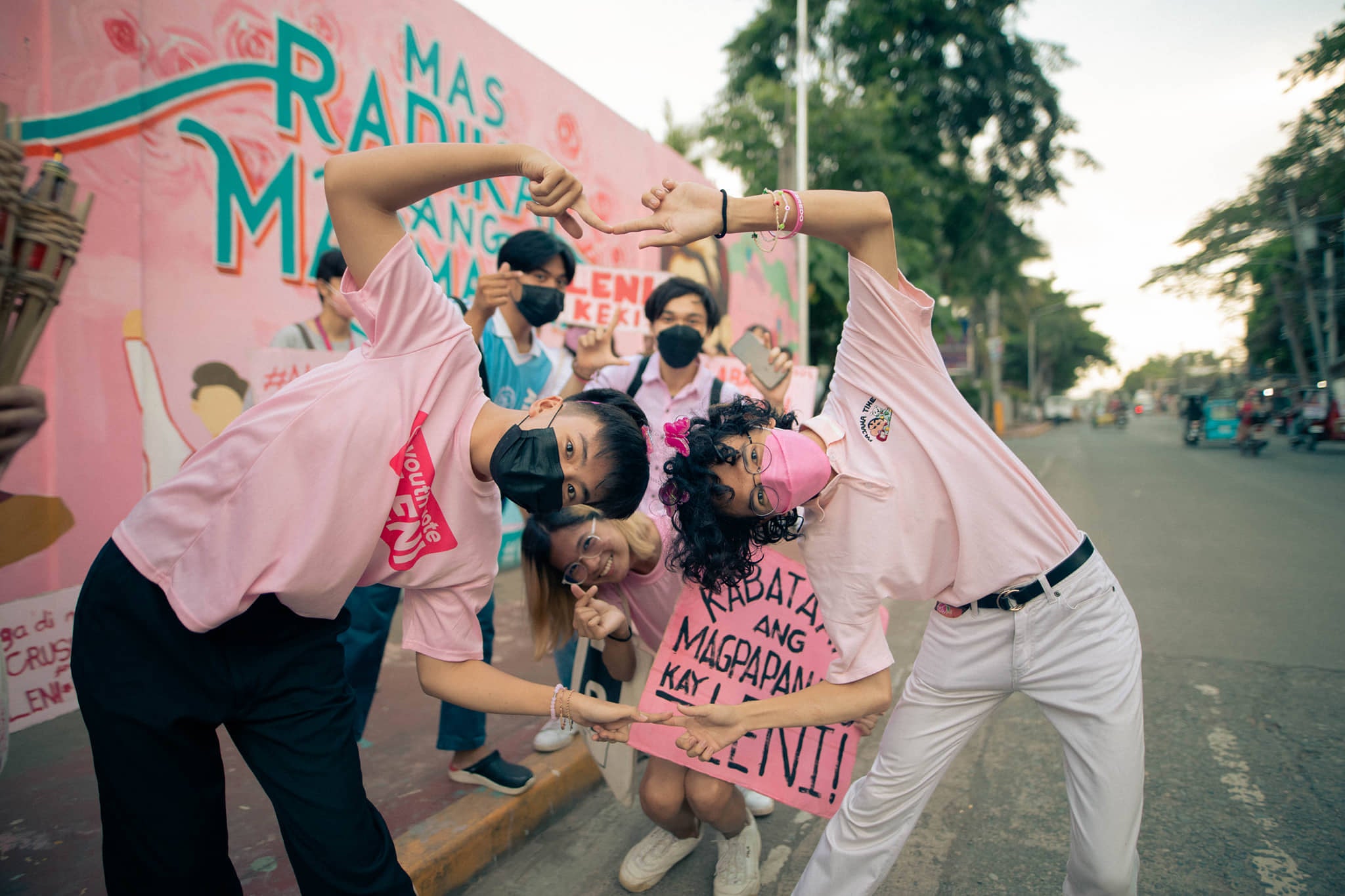 REAL ME. Nathaniel Rico (right) gives his best shot for a photo with his closest friends. PHOTO COURTESY OF NATHANIEL RICO/Facebook

Lawyer Albert Muyot, SCP’s chief executive officer, said the rights of every child to gender identity and freedom of expression are protected by the Convention on the Rights of the Child, which has been in effect in the last 30 years.

He stressed that the treaty, which was ratified by the Philippines, calls for the passage of laws to protect all LGBTQ+ children aged 18 and below against all forms of violence, discrimination or humiliation.

SCP said that in a consultation with children from Association of Southeast Asian Nations (Asean) in 2016, they admitted suffering from psychological violence and discrimination from their own families as well as schools and communities.

Imagine this, Lucas wanted to come out to have someone to share his problems with, but the unnecessary consequences that came with it were “too much,” especially because he is from a family where most men are in police service.

“My father told me that it’s fine if I’m not straight as long as I will not cross dress,” said Lucas, who was even asked to take examinations for admission at the Philippine Military Academy and Philippine National Police Academy.

He said he wanted to have a degree in political science before taking up law, but since he did not want to disappoint his family “too much,” he is now in college as a criminology student.

“I felt pressured. It’s like I’m taking up criminology to compensate for who I really am,” he told INQUIRER.net.

Colobong, who had to come out to his stepmother, too, said that while he was told that “we accept you,” as time passed by, he felt that his family did not really accept him. “It’s the most painful,” he said.

“Every day, they are telling me stories that they have friends who were gays and that as years passed by, they became straight again. It’s like they are treating my identity as a phase,” he said.

“I have to live with the agony of people stepping on my identity every day. I felt that it would have been better if they asked me to leave because I can no longer take their stereotypes,” he said.

Are LGBTQ+ people accepted in PH?

Compared to other countries in Asia, the Philippines stood out in 2019 as a spring of “acceptance.” This, as 73 percent of Filipinos declared that “society should accept homosexuality.” 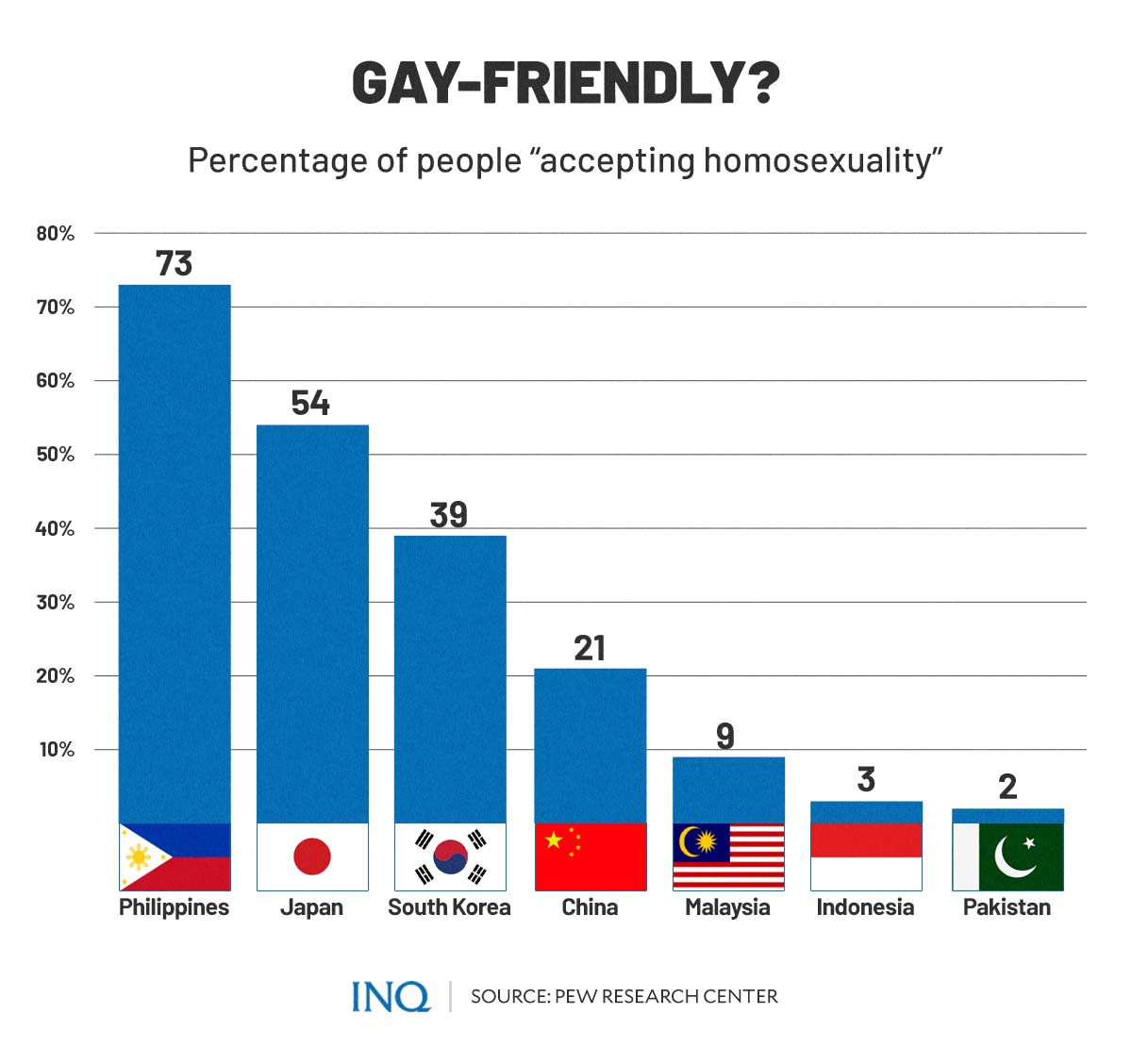 When the Pew Research Center conducted the same study in 2013, the Philippines likewise had an acceptance rate of 73 percent. In 2019, there were 24 percent who said that they don’t accept homosexuality, lower than 2013’s 26 percent. 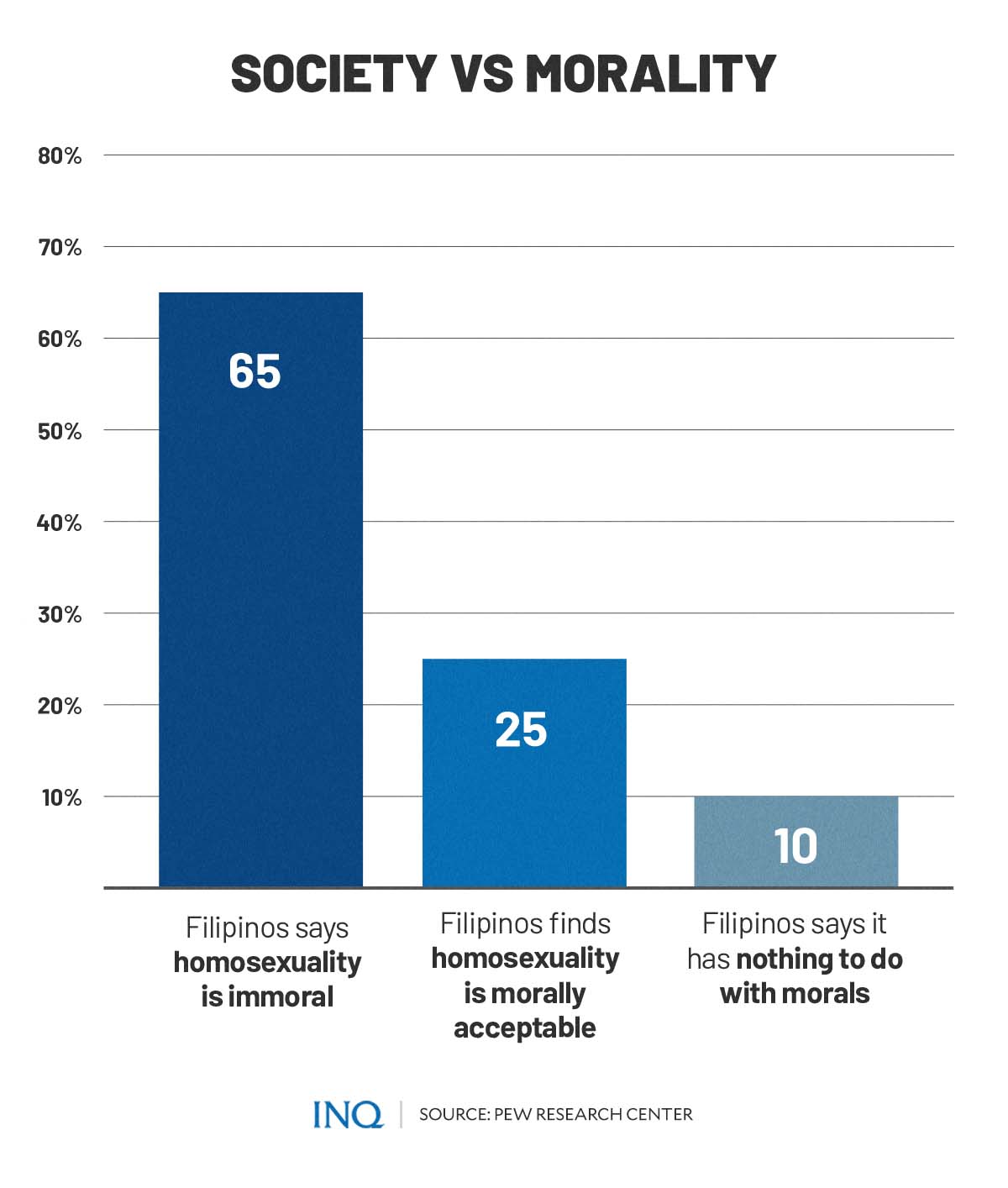 However, more Filipinos (three percent) abstained from answering the question in 2019. In 2013, it was one percent. The acceptance rates are higher than the 64 percent in 2002, the Pew Research Center said.

Magda Mis, head of digital content for the Thomson Reuters Foundation, wrote that while the Philippines indeed stood out, its picture as Asia’s most gay-friendly became a “bit blurred” as she looked closer into data.

The findings of a study by the Pew Research Center in April 2014 “suggested that when questions shifted from society to personal moral beliefs, Filipinos appeared to be more homophobic.” 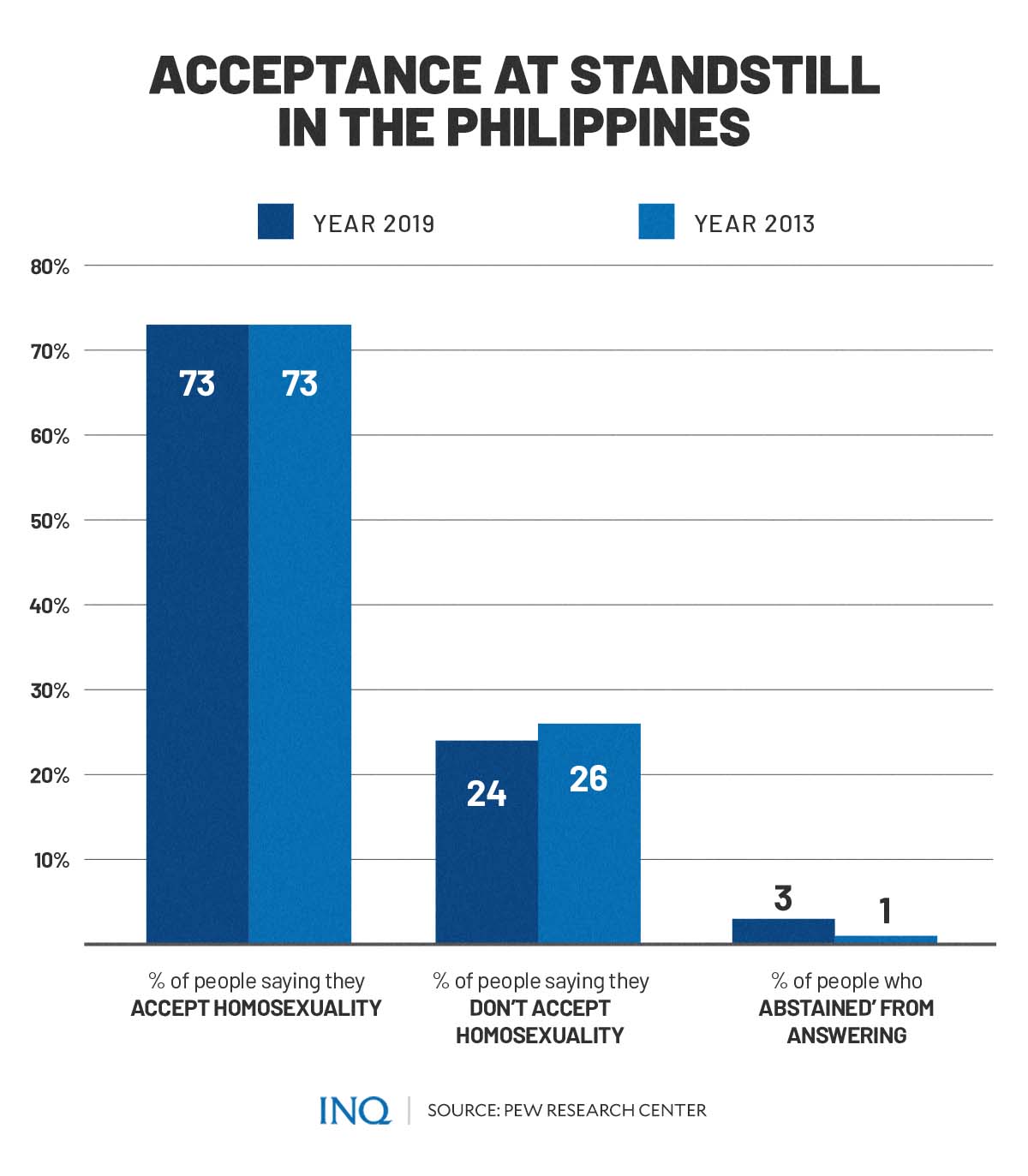 Last year, the Metro Manila Pride, citing data from the Trans Murder Monitoring Report of Transgender Europe, said 58 transgender persons have been killed in the Philippines from 2008 to September 2020.

Rey Valmores-Salinas, spokesperson of Bahaghari, said then that “We won’t allow our killings to become normal. We won’t allow violence to become the norm. It’s time for us to fight this culture of abuse, by passing a law to protect all of us from discrimination — the SOGIE Equality Bill.”

The SOGIE (Sexual Orientation, Gender Indetity and Expression) Equality Bill was first filed in 2000, however, until today, it has not been enacted into law.

In 2019, then presidential spokesperson Salvador Panelo backtracked, saying that President Rodrigo Duterte won’t certify the bill as urgent. He said the President was open to certifying a bill that would ban all kinds of discrimination, not on the basis of SOGIE.

“What he meant was an anti-discrimination law or bill not the SOGIE bill […] not that one,” Panelo had told CNN Philippines.

Dream of an ideal world

Rico, Colobong, Miranda, and Lucas shared that while their immediate relatives, even most Filipinos, are still far from accepting them for who they truly are, they expressed hope that there will come a time when they would no longer need to hide in the dark—that they would finally feel that they are accepted completely.

Lucas said he is looking forward to the day that his family will finally ask him things about his boyfriend: “I’m tired of being asked if I already have a girlfriend. I want to hear them saying that they want me to introduce my boyfriend to them, not girlfriend.”

For Colobong, instead of having his identity insulted, he said he is hoping that his family would ask him how he is—that they would say that “Joshua is gay, let’s not make a big deal out of it.”

RELATED STORY: Gay pride in a time of gloom: Barely surviving the pandemic

“‘Till now, we are still not talking about my coming out and how I feel. The long-term damage of this is that every time I have problems with the person I like, I have to keep it to myself, I can’t talk to anyone,” he said.