DepEd: We are in a crisis situation in education sector | Inquirer News

DepEd: We are in a crisis situation in education sector 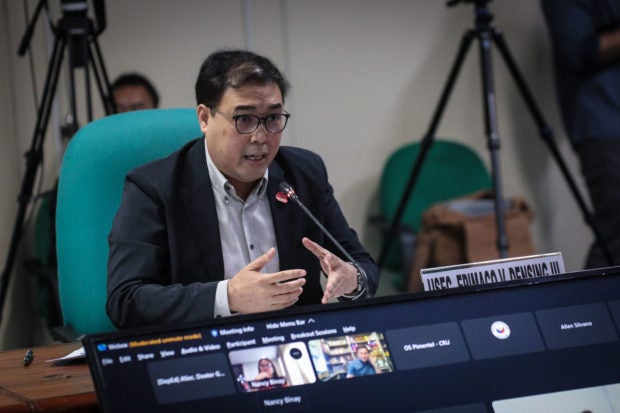 MANILA,  Philippines — Even officials of the Department of Education (DepEd) recognized a crisis in the country’s education sector.

According to DepEd Undersecretary Epimaco Densing III,  no less than Vice President Sara Duterte, who concurrently heads the agency, made it clear to them that there is a “crisis situation” in  Philippine education.

Densing mentioned this when Senate President Pro Tempore  Loren Legarda asked, during a budget hearing in the Senate, what steps the DepEd is taking to address the challenges to learners’ reading literacy.

Legarda cited the 2019  Programme for International Student Assessment (Pisa), where the Philippines landed last among 79 countries in reading comprehension and second-lowest in both mathematical and scientific literacy.

According to Densing,  the 2019 Pisa result “is already to some extent a conclusive way of telling us that there’s already a learning loss having landed last among 79 counties in reading comprehension  and  second to the last in math and science.”

“So we are in a crisis situation in the education sector that was made clear to us by Secretary Sara,  by VP Sara mentioning even to us that we are lost in the forest right now because we are too theoretical in addressing learning loss rather than being practical and looking at the competent side of it,” the official added.

Duterte then enumerated before the Senate finance subcommittee how the DepEd intends to address the problems in the education sector.

These include the creation of a learning recovery and continuity plan such as profiling and clustering of learners based on academic needs; expand learning time; conducting end of school year or summer learning remediation intervention program; and engage parents or legal guardians in facilitating learning.

DepEd also plans to intensify the implementation of reading intervention programs and the English language for subjects taught in  English, conduct regular home visitation and follow-ups, and strengthen instructional supervision, among others.

Duterte also shared that during their focused group discussions, they discovered that the country has no existing national reading program for learners.

“So it’s up to the field to develop their own reading program through their Brigada Eskwela and this is something that I think should be worked on by the Department of Education— a national reading program for our K to Grade 3,”  she then said.

Duterte said she would solve all the problems in the country’s basic education if Congress would give DepEd an additional P100 billion on top of the proposed P710 billion allocation next year.

Read Next
CJ Gesmundo to judges: You can count on us
EDITORS' PICK
Lawmakers eyeing more changes in Maharlika plan
How not to retire as an ex-president
Hidilyn Diaz wins only gold missing from her collection
Shop smarter with vivo’s big 12.12 holiday deals
The vivo Y02 is now available in the Philippines for only PHP 5,299
House energy committee chair Arroyo bats for cheap electricity
MOST READ
Jovit Baldivino, ‘Pilipinas Got Talent’ winner, dies at 29
LPA enters PAR, to likely strengthen into tropical depression in coming days – Pagasa
Andi Eigenmann, family in Manila for a quick visit; Ellie dines with grandma Jaclyn Jose
11 Filipino imports named to Japan B.League Asian All-Star team
Don't miss out on the latest news and information.