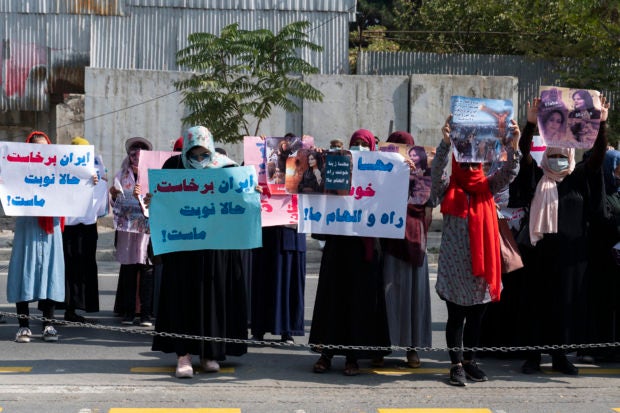 Afghan women hold placards as they take part in a protest in front of the Iranian embassy in Kabul on September 29, 2022. AFP

KABUL — Taliban forces fired shots into the air on Thursday to disperse a women’s rally supporting protests in Iran over the death of a woman in the custody of morality police.

Deadly protests have erupted in neighboring Iran for the past two weeks, following the death of 22-year-old Mahsa Amini while detained by the Islamic republic’s morality police.

Chanting the same “Women, life, freedom!” mantra used in demonstrations in Iran, about 25 Afghan women protested in front of the Iranian embassy in Kabul before being dispersed by Taliban forces firing in the air, an AFP correspondent reported.

Women protesters carried banners that read: “Iran has risen, now it’s our turn!” and “From Kabul to Iran, say no to dictatorship!”

Taliban forces swiftly snatched the banners and tore them in front of the protesters.