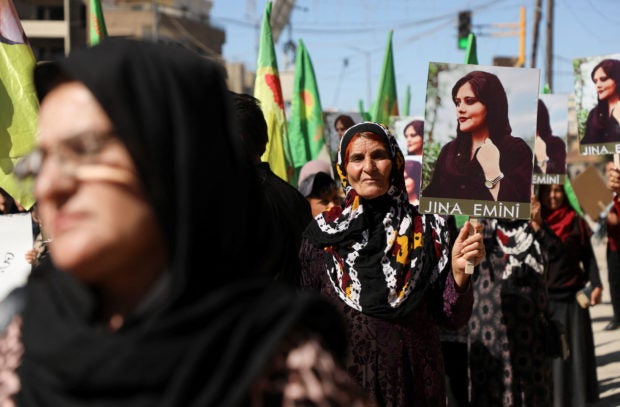 Women carry flags and pictures during a protest over the death of 22-year-old Kurdish woman Mahsa Amini in Iran, in the Kurdish-controlled city of Qamishli, northeastern Syria September 26, 2022. REUTERS/Orhan Qereman

NEW YORK — Masih Alinejad, a U.S.-based Iranian journalist and women’s rights activist, said the protests erupting in dozens of cities over the death of young Iranian woman Mahsa Amini in police custody is a “tipping point” for Iran.

“For the Islamic Republic, the murder of Mahsa Amini is becoming a tipping point because compulsory hijab is not just a small piece of cloth,” Alinejad told Reuters on Tuesday in New York. “It’s like the Berlin Wall. And if Iranian women manage to tear this wall down, the Islamic Republic won’t exist.”

Amini, 22, from the northwestern Kurdish city of Saqez, was arrested on Sept. 13 in Tehran for “unsuitable attire” by the morality police who enforce the Islamic Republic’s strict dress code. She died three days later in hospital after falling into a coma, sparking the first big show of opposition on Iran’s streets since authorities crushed protests against a rise in gasoline prices in 2019.

Police say she fell ill as she waited with other detained women.

“This movement is the result of 40 years of women fighting back, pushing back the boundaries,” Alinejad said. “I get goosebumps because when I launched the campaign against compulsory hijab, I never thought that this is going to happen while I’m alive.”

Alinejad started a social media campaign in 2014 encouraging women in Iran to share self-portraits without the Islamic veil, which she then shares on her Facebook page, “My Stealthy Freedom.”

Amini’s death has drawn widespread international condemnation while Iran has blamed “thugs” linked to “foreign enemies” for the unrest. Tehran has accused the United States and some European countries of using the unrest to try to destabilize the Islamic Republic.

Fury grows in Iran over woman who died after hijab arrest