SC thanks PNP for assuring protection for judges | Inquirer News

SC thanks PNP for assuring protection for judges 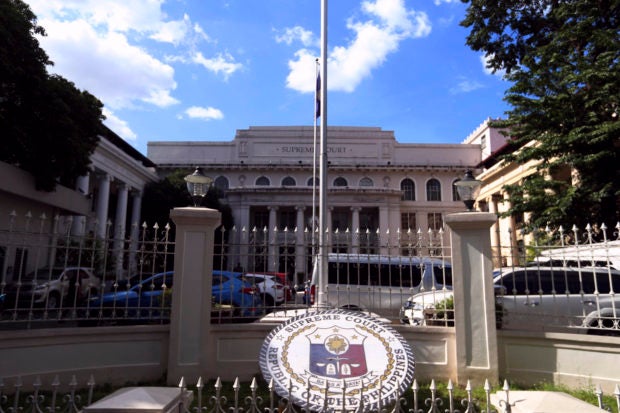 MANILA, Philippines — The Supreme Court on Wednesday thanked the Philippine National Police for assuring protection for members of the judiciary against threats and intimidation following treacherous tirades against a trial court judge.

In a statement, the PNP on Wednesday said it was committed to take steps to protect every citizen against all kinds of threats, including those made on social media platforms.

“We hope that they would soon start and finish the investigation of these threats against our judges,” he said.

“It is very important that members of the judiciary are free from threats to ensure that they are able to hand down decisions that are correct, just and according to the laws,” Hosaka said.

The PNP said that it “will always be on the side of the law and ensures the safety and security of the honorable members of the court to enable them to promulgate decisions without fear of reprisal or retribution.”

Reacting to death threats received by a Manila Regional Trial Court (RTC) judge who ruled to dismiss a government petition to outlaw the Communist Party of the Philippines (CPP) and the New People’s Army (NPA), the Supreme Court on Tuesday warned that it would take punitive action against individuals who threaten judges.

Lawyers’ and judges’ groups and fellow alumni of Manila RTC Branch 19 Judge Marlo Magdoza-Malagar condemned the threats against her and her husband, University of the Philippines-Cebu Chancellor Leo Malagar, who were vilified and red-tagged for her Sept. 21 decision.

On Wednesday, the University of the Philippines-Diliman stepped up to defend the Malagar couple.

UP Diliman Chancellor Fidel Nemenzo denounced former anticommunist task force spokesperson Lorraine Badoy for her “unconscionable, irresponsible” accusations that the judge and her husband — both longtime public servants — were operatives of the CPP-NPA.

“Her outright red-tagging is not only patently ridiculous, it is also dangerous because it made them targets of hate and violence,” Nemenzo said.

He said the Malagars were “upstanding public officials” and called on the public to help defend the independence of both the judiciary and the state university, which also is a victim of relentless red-tagging.

Red-tagging is the baseless designation of persons or groups as allies or supporters, if not members, of the CPP-NPA. This practice by state and pro-state organizations and individuals normally precedes attacks on the persons who are tagged as such. Many activists, community organizers and human rights defenders who were red-tagged had been assassinated or abducted and disappeared.

Badoy had accused Malagar of “lawyering” for the CPP-NPA when the judge ruled that rebellion was not terrorism.

Calling her 135-page ruling a “judgment straight out of the bowels of communist hell,” Badoy said that “if I kill this judge and I do so out of my political belief that all allies of the CPP-NPA-NDF must be killed because there is no difference in my mind between a member of the CPP-NPA-NDFP and their friends, then please be lenient with me.”

Badoy also said Malagar’s husband was an “operative” of the CPP-NPA in his youth.

Nemenzo said Badoy’s statement “degenerated into absurdity” as soon as she tried to link the UP-Cebu chancellor to the rebel movement.

At the House of Representatives, the Makabayan bloc of lawmakers on Wednesday questioned the funding for the National Task Force to End Local Communist Armed Conflict (NTF-Elcac), which Badoy had served as spokesperson.

Kabataan Rep. Raoul Danniel Manuel said the task force had a history of tapping into the funds of other government agencies.

In 2019, he said, the NTF-Elcac got P2.01 million from the National Commission on Indigenous Peoples (NCIP) and in the following year it took P2.456 billion from the budgets of various agencies which ballooned to P19.327 billion in 2021.

“If we were to include programmed and unprogrammed funds in 2022, the NTF-Elcac got P17.225 billion,” he pointed out.

Manuel noted that the NTF-Elcac had no designated treasurer responsible for handling and keeping track of its funds.

Navotas Rep. Toby Tiangco, the sponsor of the budget of the Office of the President (OP) which oversees the task force, confirmed that Badoy was no longer connected with the NTF-Elcac.