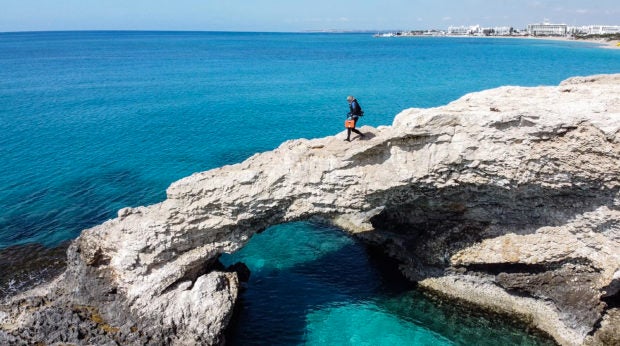 A grab from an AFPTV aerial video shows Cypriot marine ecologist Louis Hadjioannou, 38, preparing to dive to photograph corals, as he monitors the impact of climate change on the delicate fauna in the crystal clear waters of Glyko Nero in Ayia Napa, in the island’s southeastern waters on April 14, 2021. AFP FILE PHOTO

MARSEILLES, France — In the temperate shallows of the Mediterranean, once-vibrant red and purple coral forests that provide a crucial haven for biodiversity now stand bleached and brittle, transformed into skeletons by record summer temperatures, scientists say.

Holding naked branches of gorgonian coral, Tristan Estaque of marine conservation group Septentrion Environnement is returning despondent from an exploratory dive off the coast of Marseille in southern France.

“It is heartbreaking, the deterioration is so fast,” he tells AFP.

Now it is a “ghost forest”, says Estaque, with the majestic fans largely bare of living tissue.

“You have to imagine a tree where there are no more leaves, no more bark.”

Gorgonian corals, which have flexible skeletons encrusted with polyps, are found across the planet.

Those found in the Mediterranean are said to create “forests”, sheltering a huge array of species.

But they are acutely vulnerable to human activities.

Fishing nets, anchors and careless divers can rip their delicate structures, while exposure to continuous and intense heat can be lethal.

Marine heatwaves are becoming more common, according to a report this year by UN climate experts.

This summer a major marine heatwave hit the western Mediterranean, with water up to five degrees Celsius (41 degrees Fahrenheit) hotter than normal, according to Mercator Ocean International, the organisation that runs the European ocean monitoring service.

In some places water reached 30C.

Recent Septentrion Environment surveys have shown that between 70 and 90 percent of the red gorgonian population in the 10 to 20-meter zone off Marseille have since died.

The effect was like “an underwater inferno”, according to Solene Basthard-Bogain, another of the group’s specialists.

And it is not just near the southern French coast.

Gorgonian mortality has also been observed on the Spanish coasts and around the Italian island of Sardinia, according to Stephane Sartoretto of the French research agency Ifremer.

The severity of the impact appears to vary depending on the depth of the corals.

Along the sawtooth coastline of France’s Calanques National Park, notched with craggy coves and shallow habitats where the gorgonians are found in waters of just six meters (20 feet) in places, the die-offs have been particularly intense.

In the Balearic Islands, they live deeper, at 40 meters, and were therefore less impacted, Sartoretto says.

In addition to the gorgonians, sponges and bivalves have also been affected.

The marine heatwave likewise battered mussel farming, with 150 tonnes of commercial mussels and 1,000 tonnes of young stock — for next year’s crop — lost in Spain over the summer.

A drop in temperatures in the Mediterranean could help to save those corals that were spared in the summer die-off, says Basthard-Bogain, although she worries that any pathogens that may have spread because of the heat would still be present in the waters.

There are fears, too, that another hot spell cannot be ruled out before the end of the autumn.

Sartoretto says he worries that repeated periods of heat stress could be devastating for the corals.

“We can ask ourselves about the possibility of their disappearance,” he says, adding that their reproduction rate is very slow.

“Like after a forest fire on land,” he says, “they will take decades to regenerate.”

Race to save Cyprus corals from climate change, mass tourism