Race to save Cyprus corals from climate change, mass tourism 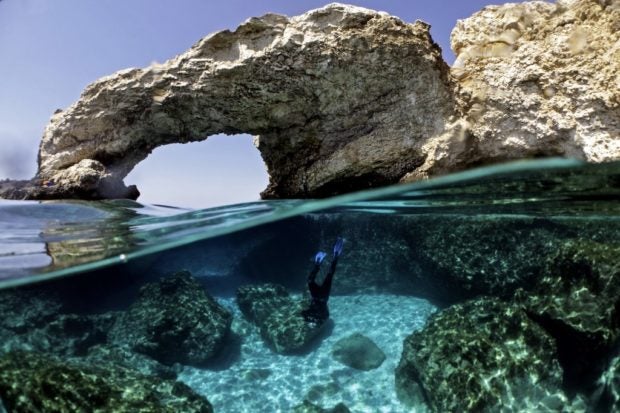 Cypriot marine ecologist Louis Hadjioannou, 38, dives to photograph the coral, as he monitors the impact of climate change on the delicate fauna in the crystal clear waters of Glyko Nero in Ayia Napa, off the island’s southeastern shore. – For the past nine years, Hadjioannou has systematically recorded the effect of rising sea temperatures of the corals near Cape Greko and is striving to raise awareness to save the marine diversity of the Cypriot waters for the next generation of islanders. (Photo by Emily IRVING-SWIFT / AFP)

Ayia Napa, Cyprus — Many people think Cyprus has no corals, says marine ecologist Louis Hadjiannou. If climate change and coastal development continue unabated, he fears, they may soon be right.

A fisherman’s son who hails from the Mediterranean island, Hadjiannou loves to put on his wetsuit, fins, and mask and plunge off the dramatic rocks into the turquoise waters to delve into the fragile underwater world.

“It’s always an exploration,” enthuses the 38-year-old researcher, looking over the crystal clear waters of Glyko Nero near the resort of Ayia Napa on the island’s southeastern coast.

“Even if you jump in at the same spot a million times, every single time you see something new, something exciting, as long as you have the open mind to look at things in the right way.”

When most people think of corals, they may imagine the colorful and species-rich Red Sea reefs off Egypt, rather than the less technicolor Mediterranean underwater habitats. 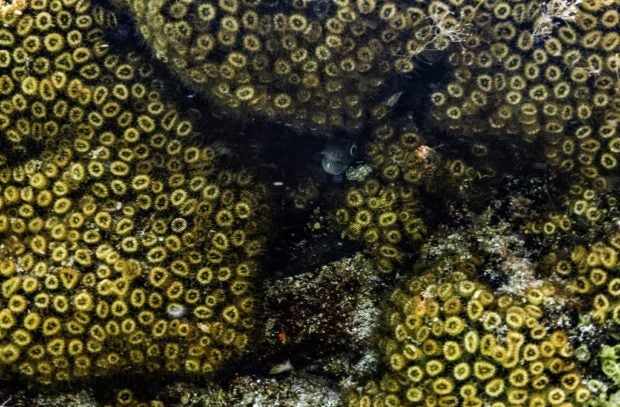 A Moray eel pokes out of a Cladocora caespitosa coral, commonly known as cushion coral, in the waters of Glyko Nero in the Mediterranean coastal city of Ayia Napa in southeastern Cyprus on April 14, 2021. – With rising water temperatures threatening the endemic corals of the Mediterranean, local marine ecologist Louis Hadjioannou monitors the impact of climate change on the delicate fauna in the crystal clear waters of Cyprus. (Photo by Emily IRVING-SWIFT / AFP)

“When I talk about the corals of Cyprus, most people say: ‘We have corals in Cyprus?'” smiles Hadjiannou, who works with the Cyprus Marine and Maritime Institute.

“Yes, it is true: We do have corals — and we are still discovering new species … They are so emblematic, they are so important, they support biodiversity. But at the same time, they are so sensitive to changes in the environment.”

Coral reefs are among the planet’s richest ecosystems and are sometimes dubbed the rainforests of the oceans, providing shelter for countless species of fish, turtles, and other marine life.

But even as Cyprus’ marine ecosystems are still being studied, Hadjiannou says, they are under extreme threat from climate change as well as mass tourism, the building of new hotels and marinas, and agricultural run-off.

For the past decade, Hadjiannou has been monitoring the corals and studying how sea temperature changes impact their health. 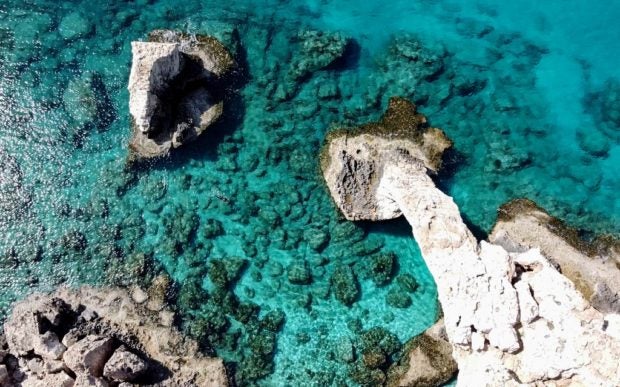 “Whenever there is an anomalous year, a higher temperature than normal, we notice a high percentage of corals are dying,” he told AFP.

A rise of about one degree Celsius in 2015 killed off 20 to 30 percent of corals, he said, adding that “some of them came back and recovered, but many did not.”

“Even the slightest increase in temperature… can seriously affect them, and I think the forecast shows it is going to be much more within the next 30, 40 years.”

While combating climate change requires a global effort, many things can be done locally, Hadjiannou said.

He urged a more sustainable kind of coastal development and the establishment of new and larger protected areas with bans on harmful practices such as swimmers stepping on corals or throwing boat anchors.

The other priority, says Hadjiannou, who became a father last month, is educating children.