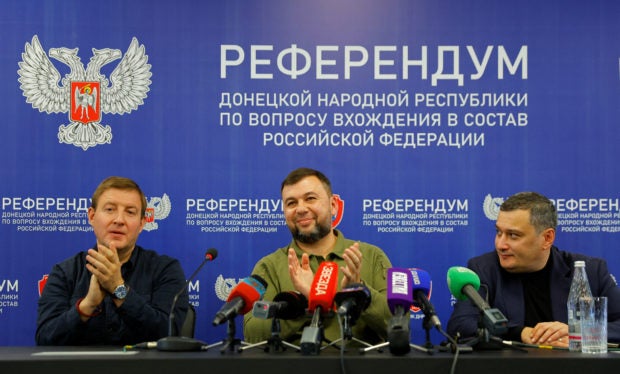 Head of the separatist self-proclaimed Donetsk People’s Republic Denis Pushilin, Chairman of the Committee of Russia’s State Duma on Information Policy, Information Technology and Communications Aleksandr Khinshtein and Secretary of the United Russia Party’s General Council Andrey Turchak attend a news conference on preliminary results of a referendum on the joining of the self-proclaimed Donetsk People’s Republic (DPR) to Russia, in Donetsk, Ukraine September 27, 2022. REUTERS/Alexander Ermochenko

The United States was also preparing a new round of sanctions against Russia should it annex Ukrainian territory and a $1.1 billion arms package for Ukraine that will be announced soon, U.S. officials said.

U.S. Secretary of State Antony J. Blinken said the United States and its allies remained committed to European energy security, after Germany, Sweden and Denmark said attacks caused major leaks from two Russian energy pipelines. It remained far from clear who might be behind the leaks.

Hastily arranged votes took place over five days in the eastern regions of Donetsk and Luhansk, and in Zaporizhzhia and Kherson to the south, that together make up about 15% of Ukrainian territory.

Vote tallies from complete results on Tuesday in the four provinces ranged from 87% to 99.2% in favor of joining Russia, according to Russia-appointed officials. The head of the upper house of the Russian parliament said the chamber might consider annexation on Oct. 4.

“The results are clear. Welcome home, to Russia!” Dmitry Medvedev, a former president who serves as deputy chairman of Russia’s Security Council and an ally of President Vladimir Putin, said on Telegram.

Within the occupied territories, Russian-installed officials took ballot boxes from house to house in what Ukraine and the West said was an illegitimate, coercive exercise to create a legal pretext for Russia to annex the four regions.

“This farce in the occupied territories cannot even be called an imitation of a referendum,” Ukrainian President Volodymyr Zelensky said in video address late on Tuesday.

The United States will introduce a resolution at the U.N. Security Council calling on member states not to recognize any change to Ukraine and obligating Russia to withdraw its troops, U.S. envoy Linda Thomas-Greenfield said.

“Russia’s sham referenda, if accepted, will open a pandora’s box that we cannot close,” she said at a council meeting.

Russia has the ability to veto a resolution in the Security Council, but Thomas-Greenfield said that would prompt the United States to take the issue to the U.N. General Assembly.

“Any referenda held under these conditions, at the barrel of a gun, can never be remotely close to free or fair,” Britain’s Deputy U.N. Ambassador James Kariuki said.

Russia’s ambassador to the United Nations, Vassily Nebenzia, told the meeting that the referendums were conducted transparently and in line with electoral norms.

“This process is going to continue if Kyiv does not recognize its mistakes and its strategic errors and doesn’t start to be guided by the interests of its own people and not blindly carry out the will of those people who are playing them,” he said.

If Russia annexes the four Ukrainian regions, Putin could portray any Ukrainian attempt to recapture them as an attack on Russia itself.

Putin said last week he was willing to use nuclear weapons to defend the “territorial integrity” of Russia.

But Mykhailo Podolyak, an adviser to Zelensky, told Reuters that Kyiv would not be swayed by nuclear threats or by the annexation votes, and would press on with plans to retake all territory occupied by invading Russian forces.

He said Ukrainians who helped organise the referendums would face treason charges and at least five years in jail. Ukrainians who were forced to vote would not be punished.

The new U.S. arms package will include HIMARS launcher systems, accompanying munitions, various types of counter drone systems and radar systems, along with spares, training and technical support, a source briefed on the plan said.

“In instigating Kiev to continue using the military equipment received from the West, Washington does not realize the riskiness of its actions … Our steps to defend the Fatherland will be firm and decisive,” Russia’s U.S. envoy Anatoly Antonov said on the embassy’s Telegram channel.

Diplomats say the nuclear saber-rattling is an attempt by Russia to scare the West into reducing its support for Ukraine.

None of the four regions which held referendums is fully under Russia’s control, with Ukrainian forces reporting more advances since they routed Russian troops in a fifth province, Kharkiv, this month.

The general staff of Ukraine’s military said late on Tuesday that Russian forces had shelled seven towns in Donetsk.The military said 20 towns in the Zaporizhzhia region in south-central Ukraine and 35 towns and villages in the Kherson region in the south were also hit.

Leonid Pasechnik, a separatist leader of Luhansk, said on Telegram three municipal gas workers were killed and one wounded by Ukrainian shelling in Brianka.

Biden: Russian referendums are a ‘sham’, US will never recognize annexation