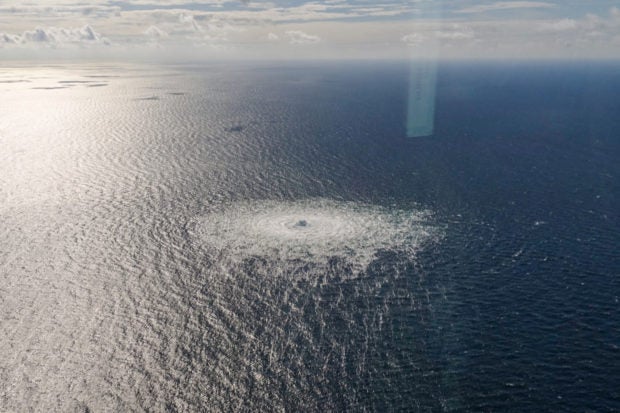 Unexplained leaks in two Russian gas pipelines in the Baltic Sea are spewing out greenhouse gas emissions, raising fears that the disruption could cause a climate calamity – although to what extent is still unclear.

Neither pipeline was in operation, but both contained natural gas – which is largely composed of methane, a potent greenhouse gas that is the second biggest cause of climate change after CO2.

“There are a number of uncertainties, but if these pipelines fail, the impact to the climate will be disastrous and could even be unprecedented,” said atmospheric chemist David McCabe, who is senior scientist at the non-profit Clean Air Task Force.

McCabe and other emissions experts told Reuters that it was not yet possible to assess the size of the leak, given uncertainties around factors such as the temperature of the gas in the pipeline, how fast it’s leaking, and how much gas would be absorbed by microbes in the water before reaching the surface.

But since both Nord Stream pipelines contained mostly methane, “the potential for a massive and highly damaging emission event is very worrisome”, McCabe said.

Over a 20-year timeframe, methane has more than 80 times the planet-warming potency of carbon dioxide, and roughly 30 times its potency over 100 years. Scientists say sharp cuts in methane emissions over the next few years will be a vital lever in curbing climate change.

Jasmin Cooper, a research associate at Imperial College London’s Sustainable Gas Institute, said it would be difficult to quantify exactly how much gas was reaching the atmosphere – especially given scarce existing data on leaks from subsea pipelines.

“Gazprom will probably have an estimate based on gas throughputs, but in terms of how much gas/methane is emitted into the atmosphere … they need to send out a team now to measure and monitor,” she said, referring to the state-owned Russian gas firm.

A “conservative estimate” based on available data suggests the leaks together were releasing more than 500 metric tons of methane per hour when first breached, with the pressure and flow rate decreasing over time, said Jean-Francois Gauthier, vice president of measurements at the commercial methane-measuring satellite firm GHGSat.

By comparison, the huge Aliso Canyon gas leak in the United States in 2016 spewed around 50 tons of methane per hour at its peak. “So this would be an order of magnitude more,” Gauthier said.

A spokesman for Nord Stream 2 – one of the leaking pipelines, which never started operating and was shelved by Germany just before Russia invaded Ukraine – said this week the system held 300 million cubic metres of gas.

Releasing that amount in entirety to the atmosphere would result in around 200,000 tonnes of methane emissions, said chemical engineer Paul Balcombe at London’s Queen Mary University.

That amount of methane would have about the same global warming potential over a 100-year timeframe as about 6 million tons of carbon dioxide, according to Reuters calculations based on IPCC conversion factors. That’s roughly on par with the amount of CO2 emitted in an entire year by mid-sized cities such as Havana, or Helsinki or Dayton, Ohio.

The amount of gas leaking from the Nord Stream 1 pipeline system is less clear, with a pipeline spokesman declining to say how much was left in the system when it was taken offline for maintenance a few weeks ago.

“We are in contact with [EU member states] to look into what happened and find the fastest way to stop leaks and avoid worse damage,” Grassi said in a tweet.

EU countries were among more than 100 countries, including the United States, Brazil, Pakistan and Mexico that pledged last year to slash their combined methane emissions by 30% by 2030, in a bid to help stave off disastrous levels of climate change.

The German environment ministry said the leaks would not pose a significant threat to marine life, but Greenpeace raised concerns on Tuesday that fish may get caught in plumes of gas, which could interfere with their breathing.

Denmark’s Energy Agency told Reuters said it was too early to say who would investigate the Nord Stream 2 leak and no-one has been to look at the pipeline yet.

It added the leaks will likely continue for several days and perhaps even a week.

Europe races to prepare for energy crunch this winter