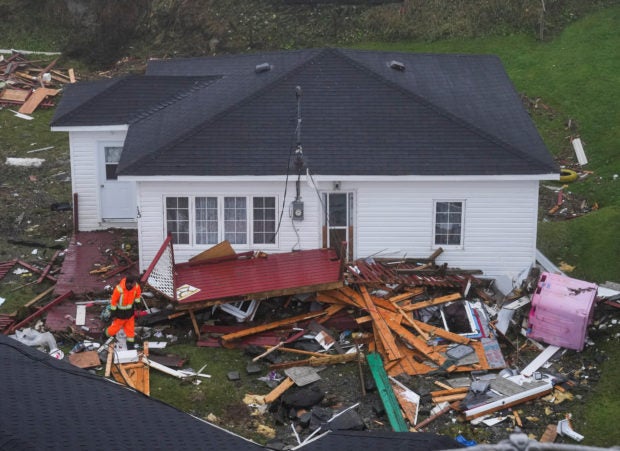 A search and rescue member walks around a property in the aftermath of Hurricane Fiona in Port Aux Basques, Newfoundland, Canada September 27, 2022. REUTERS

Fiona recorded the lowest barometric pressure ever for a storm when it made landfall on Saturday as a post-tropical storm with powerful winds, rainfall and high waves, the hurricane centre said.

Farmers to fishermen in Atlantic Canada are seeking government help after the storm devastated vessels, farms and harbor infrastructure, with flooding now threatening to damage the potato crop in Prince Edward Island (PEI), which accounts for a fifth of Canada’s output.

“Even as we see the devastation, we also see, in conversations I had with fishers and farmers and folks who are cleaning up their lives and trying to recover, there is a resilience to Canadians,” Trudeau told reporters in Stanley Bridge, PEI.

DBRS credit rating agency said the storm could result in record insured losses for the Atlantic provinces, putting the initial estimate between C$300 million and C$700 million ($218 million and $509 million). But the industry should be able to deal with the blow as the Atlantic Canada property insurance market is relatively small, it said.

Insurance Bureau of Canada said it would take several weeks to get a clear idea of insurance claims.

By Tuesday morning more than a quarter of electricity customers in Nova Scotia were still without power.

While lobster fishing is minimal at this time of year, it will be critical to repair wrecked harbors before spring, when fishing picks up, said Kent Poole, who fishes in PEI. Canada is one of the world’s biggest lobster exporters.

The potato harvest was just underway when Fiona hit and the rain it left behind may rot crops in low-lying areas, said Greg Donald, general manager of the PEI Potato Board.

Farmers are also struggling to find enough diesel to run machinery, some lost warehouses, and many are still without power needed to operate conveyors and sorting equipment, Donald said.

“The big concern will be rot and storability, but time will tell,” Donald said. “If we continue to get rain, it’ll be a bigger problem.”