Florida scrambles to prepare as Hurricane Ian churns toward coast 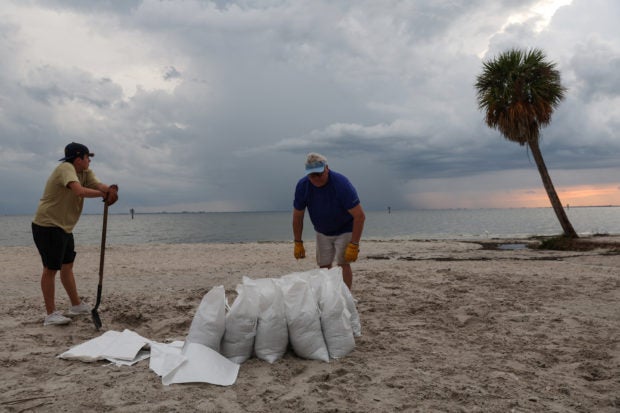 Ian’s path toward Florida forced the U.S. space agency Nasa to roll its giant Artemis 1 moon rocket off its Cape Canaveral launchpad after postponing the much-anticipated mission a third time.

Ian was a Category 2 hurricane as of Monday evening, packing winds over 100 miles per hour and expected to intensify before making landfall in Cuba. Forecasters said that once Ian left Cuba, the storm could make landfall north of Tampa Bay early on Friday or turn northwest toward Florida’s Panhandle.

“This is a really big storm,” Florida Governor Ron DeSantis told a news conference, saying the storm could potentially envelope both coasts of the state.

The Biden administration declared a public health emergency for the state on Monday and said it was working with local officials to provide support.

Florida has seen wetter, windier and more intense hurricanes in recent years, which experts attribute to climate change. There is also evidence that climate change is causing storms to travel more slowly, meaning they can dump more water in one place.

Signs of the impending storm were seen throughout Florida, a state of 21 million people. In Titusville, a city of 43,000 on the Atlantic Coast, crews used chainsaws to trim palm trees.

In a grocery store in St. Petersburg, across the state on the Gulf Coast, only empty cardboard boxes remained where the store normally stocks distilled water. Toilet paper, snacks and canned soup could still be found.

In the historic Tampa neighborhood of Ybor City, northeast of downtown, Diane Zambito, 64, said she normally doesn’t get rattled by hurricanes that hit the state.

“But this one’s different,” she said on Monday afternoon as her husband nailed plywood over their home’s windows. “This one scares me. It’s too big to not be scared if you have any sense.”

The couple planned to shovel sand into bags and stack them up in front of the doors to keep water from flowing inside.

The Zambitos were among many Florida residents preparing for flooding that could submerge streets and homes. Hurricane-force could damage or destroy homes and businesses and trigger power outages in the coming days, forecasters warn.

The governor has mobilized 5,000 National Guard members. An additional 2,000 are coming from Tennessee, Georgia and North Carolina and nearby states have troops on standby.

Key West Mayor Teri Johnston said her island city could be one of the first places in the United States hit by Hurricane Ian.

Johnston said homeowners and vacation rentals had nailed up storm shutters or boards across windows as residents stocked up enough food and water to last a week.

The city cut down the coconuts from trees lining some streets, she said, explaining: “A coconut can become a 30-pound projectile in a storm.”

City vehicles were moved to higher ground and residents living on boats were told to seek shelter on land before storm squalls start lashing the city on Monday night. Forecasters predicted a 4-foot (1.2-meter) storm surge that could push seawater up over the shore into the streets.

“If there’s an evacuation, I will be the one to order it,” Johnston said. “We’ll consider it if the storm wobbles east.”

The intensifying storm was about 100 miles (160 km) southwest of Grand Cayman on Monday morning with sustained winds of 80 miles per hour (128 km per hour).

BP Plc halted oil production at two platforms in the Gulf of Mexico.

Ian could intensify into a Category 3 storm once it enters the Gulf of Mexico, forecasters say, but weaken again while parked off Tampa on Florida’s Gulf Coast on Thursday. From there, the storm’s path is uncertain.

Regardless, between 6 to 12 inches (15 to 30 cm) of rain were expected to inundate both Florida’s Gulf and Atlantic coasts on Thursday, said Bob Oravec, a meteorologist with the National Weather Service’s Weather Prediction Center in College Park, Maryland.

Ian follows Hurricane Fiona, a powerful Category 4 storm that carved a path of destruction last week through Puerto Rico, leaving most of the U.S. territory without power and potable water. Fiona then barreled through the Turks and Caicos Islands, skirted Bermuda and slammed into Canada’s Atlantic coast, where critical infrastructure might take months to repair.