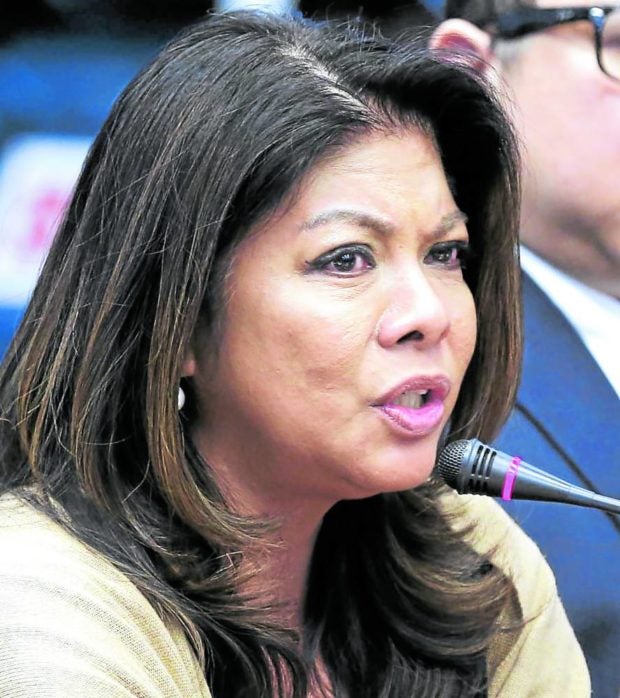 MANILA, Philippines — The controversial Lorraine Badoy is still part of the National Task Force to End Local Communist Armed Conflict (NTF-Elcac), according to the lawmaker sponsoring the proposed 2023 budget of the Department of the Interior and Local Government (DILG).

But Nueva Vizcaya Rep. Luisa Cuaresma could not say what Badoy’s current official designation is in the anti-insurgency task force except that she “is not included” in the DILG and that “in the national, she is part of it.”

During plenary debates at the House of Representatives on Tuesday, Gabriela Party-list Rep. Arlene Brosas quizzed Cuaresma about NTF-Elcac funds under the DILG.

When Cuaresma said that P90 million is being used for meetings of an NTF-Elcac cluster, Brosas asked if that included payments to Badoy.

(That’s a very huge budget. In these clusters mentioned, is former NTF-Elcac spokesperson Lorraine Badoy a part of it, Mr. Speaker? Is she included in the payroll? And what is her official designation with the NTF-Elcac?)

In response, Cuaresma said Badoy is with the national cluster but not with the DILG.

“Mr. Speaker, your Honor, here in the local government empowerment under DILG, the person mentioned by the Honorable lawmaker Arlene Brosas is not included,” Cuaresma replied in Filipino.

“I would just clarify again Mr. Speaker, first of all: is Lorraine Badoy part of the clusters of NTF-Elcac now? This is answerable by yes or no,” Brosas pressed.

Brosas then asked Cuaresma if she knows where Badoy has been assigned, to which the latter said that she is not sure where the Badoy was designated. However, Cuaresma assured Brosas that what she is sure of is that Badoy is not part of the DILG.

“When we say that she is in the national, where exactly is she part of, Mr. Speaker? Because if she is not with DILG, where is she designated? Is she under the payroll of DILG?” Brosas asked.

“Mr. Speaker, your Honor, what I know is that she is not with the DILG, maybe she is working for other national agencies. But not with the Department of the Interior and Local Government,” Cuaresma replied.

Brosas further questioned the DILG budget sponsor about Badoy’s current official designation at NTF-Elcac but Cuaresma admitted not knowing the particular assignment given to Badoy – if there is one – under the new administration.

INQUIRER.net has sought the side of Badoy over the said issue, but she has not replied as of posting time.

During the term of Duterte, Badoy and retired Lt. Gen. Antonio Parlade Jr. served as spokespersons of the NTF-Elcac, leading the campaign against allegedly pro-communist groups.

However, both Badoy and Parlade were accused by activists of red-tagging, or linking civilians to communist terrorist groups supposedly without providing much proof. While Badoy and Parlade have maintained that their pronouncements were not red-tagging as they were merely purportedly telling the truth, several organizations have filed complaints against them before the Office of the Ombudsman.

READ: Karapatan urges Ombudsman Martires to act on its complaint vs NTF-Elcac execs

Badoy found herself in hot water again after she accused – in a now-deleted post – a Manila Regional Trial Court judge of lawyering for the Communist Party of the Philippines and the New People’s Army (CPP-NPA) when the lower court dismissed the government’s petition for proscription that would have declared the CPP-NPA a terrorist organization.

A group of judges, however, condemned Badoy’s statements, saying that red-tagging activities should be stopped. With reports from Trisha Manalaysay, trainee