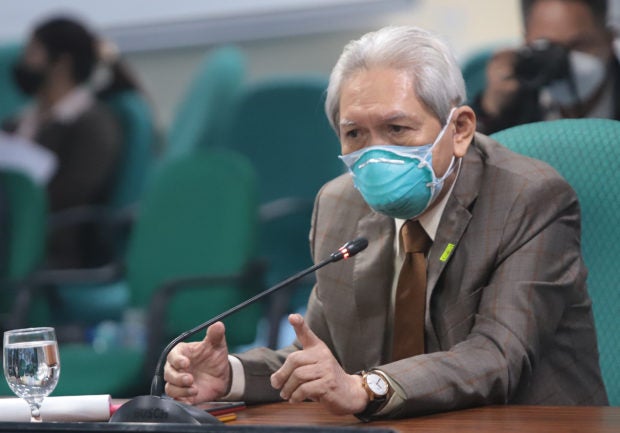 OMBUDSMAN OFFICE’S BUDGET: Ombudsman Samuel Martires attends the Finance Subcommittee A deliberations on the proposed budget of the Office of the Ombudsman Tuesday, September 27, 2022 and answered queries from senators on the status of its budget in fighting corruption. (Bibo Nueva España /Senate PRIB)

MANILA, Philippines — Corruption exists within the Office of the Ombudsman, its top official Samuel Martires himself admitted on Tuesday.

Surprisingly, he made the revelation when asked by Senate Minority Leader Aquilino Pimentel III if the Office of the Ombudsman’s P4.781 billion 2023 budget was adequate to cover the expenses for its activities during a hearing before the Senate committee on finance.

For Martires, the fight against corruption is not easy, no matter how many billions are spent.

(In my opinion, the fund of the Ombudsman is sufficient. But it is not enough to fight corruption even if you give us P100 billion.)

“I must admit to you, Your Honor — this is not to destroy the Office of the Ombudsman — we ourselves are fighting corruption within the office,” he added.

Since they don’t use their phones or landlines, Martires said they can’t present any proof of wrongdoing by their staff.

Instead of meeting at the office, he said these workers choose to do business over meals. Although the Ombudsman wanted to eavesdrop, the head of security wouldn’t let him.

(We have employees who are corrupt. The problem is that we cannot find concrete evidence. I did everything I can.)

Martires also stressed that their office had forgotten its program that aims “to address the causes of inefficiency and red tape.”

Martires, appointed by former President Rodrigo Duterte, earlier said that it is nearly impossible to cleanse corruption in the government.

In 2020, the Ombudsman issued a memorandum circular that limits access to government officials’ statements of assets, liabilities, and net worth (SALN).

The limited SALN access drew flak from critics who raised transparency issues in the government.

The Ombudsman’s mandate is to investigate complaints relative to public office, make recommendations, and file and prosecute cases before the proper body.