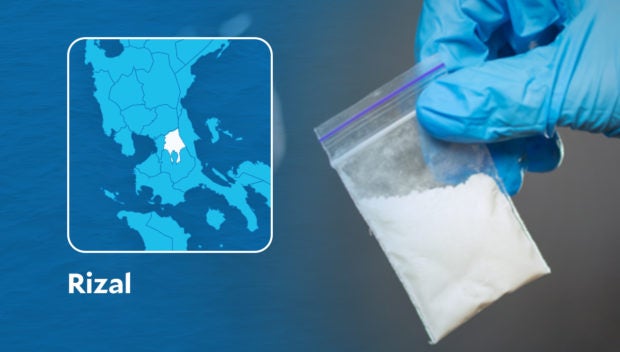 The Police Regional Office 4A (PRO-4A) reported Tuesday that anti-illegal drugs operatives collared Diadema and Betty, both surnamed Babasa, at 7:12 p.m. after selling P3,000 worth of shabu to a poseur buyer in Barangay Gulod Malaya in San Mateo, Rizal. The report did not specify the relationship between the suspects.

Seized from the suspects were a weighing scale, one big plastic sachet, and eight small sachets of shabu weighing 1.026 kilograms with estimated Dangerous Drugs Board value of P6,979,520.

The report tagged Diadema as high-value individual (HVI) on the drug watch list in the local drug scene.

The police said the three suspects were also considered HVIs.

The police were conducting further investigation to determine the source of the illegal drugs seized from the five suspects.

All suspects are under police custody and face charges of violating the Comprehensive Dangerous Drugs Act of 2002.

Your subscription could not be saved. Please try again.
Your subscription has been successful.
Read Next
8 dead due to Karding — NDRRMC
EDITORS' PICK
ACT slams Edca on 124th anniversary of PH-American war: ‘Tila hindi umalis ang mananakop’
Philippines central bank to focus on inflation at next policy meeting – governor
Only 38% of students grade 1 to 3 prefer local language as medium of instruction — Pulse Asia
House energy committee chair Arroyo bats for cheap electricity
Omega Speedmaster super racing: Tiny device massive change
vivo Philippines offers a free bouquet of flowers and a premium necklace perfect for Valentine’s Day
MOST READ
Pokwang admits she lied about cause of split with Lee O’Brian: ‘Umasa akong aayusin pa niya’
Vice Ganda asserts all is well with Karylle, takes swipe at ‘kuya’ who chimed in to be ‘trending’
Immigration detention head, 35 others sacked over foreign detainees’ VIP treatment
OWWA chief Arnell Ignacio: Socmed manager behind post on my love life
Don't miss out on the latest news and information.