BIFF commander, 28 others yield to Army 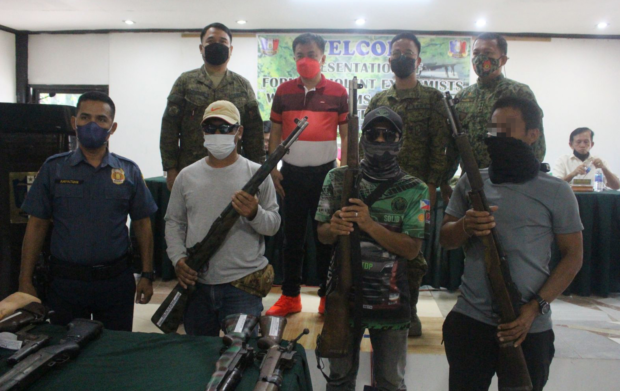 BIFF fighters turn over their firearms to local and military officials in Maguindanao. (Army photo)

DATU ODIN SINSUAT, Maguindanao — A field commander of the Islamic State-linked Bangsamoro Islamic Freedom Fighters (BIFF) and 28 others surrendered to military authorities and local officials in Maguindanao and North Cotabato provinces over the weekend.

Pangcog said immediate cash assistance was awarded to the former gunmen as their names are also being enrolled in the government’s reintegration program.

Their surrender, according to Maj. Gen. Roy Galido, commander of the Army’s 6th Infantry Division, means that “the violent extremists saw that the government is sincerely implementing the reintegration program, hence, they were convinced to lay down their arms and return to the folds of the law.”

In Midsayap town, Cotabato province, six BIFF members also surrendered to the military and were presented to Mayor Rolly Sacdalan.

“You made the right decision. Your government is ready to help you live normal lives,” Sacdalan told the surrenderers who belonged to the BIFF faction headed by Kagi Karialan.

From January to September this year, a total of 178 BIFF gunmen surrendered to the military in Central Mindanao, Army records showed.