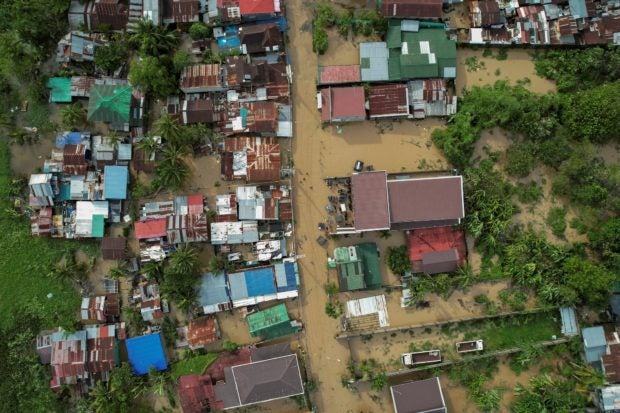 MANILA, Philippines—Typhoon Karding (international name: Noru) pummeled Luzon on Sunday (Sept. 25), where a little over 600,000 people, based on estimates made by a United Nations (UN) agency), live below the poverty line.

Hours after Karding morphed into a super typhoon, it made landfall in Burdeos, Quezon province at 5:30 PM. Around 9 PM, the Philippine Atmospheric, Geophysical and Astronomical Services Administration (Pagasa) said Karding weakened into a typhoon as it made its second landfall in the vicinity of Dingalan, Aurora.

READ: Karding weakens to a typhoon as it makes second landfall

According to UN Office for Coordination of Humanitarian Affairs (UN-OCHA), which monitored the impact of Karding on poor communities in the Philippines, at least 689,000 people living below the poverty line were expected to be further hammered by the strong typhoon.

The vulnerable population, according to UN-OCHA, was estimated based on pre-existing socio-economic conditions.

The UN agency also reported that 6.8 million people were living in areas worst-hit by Karding, while 12.7 million reside in areas on the typhoon’s path. 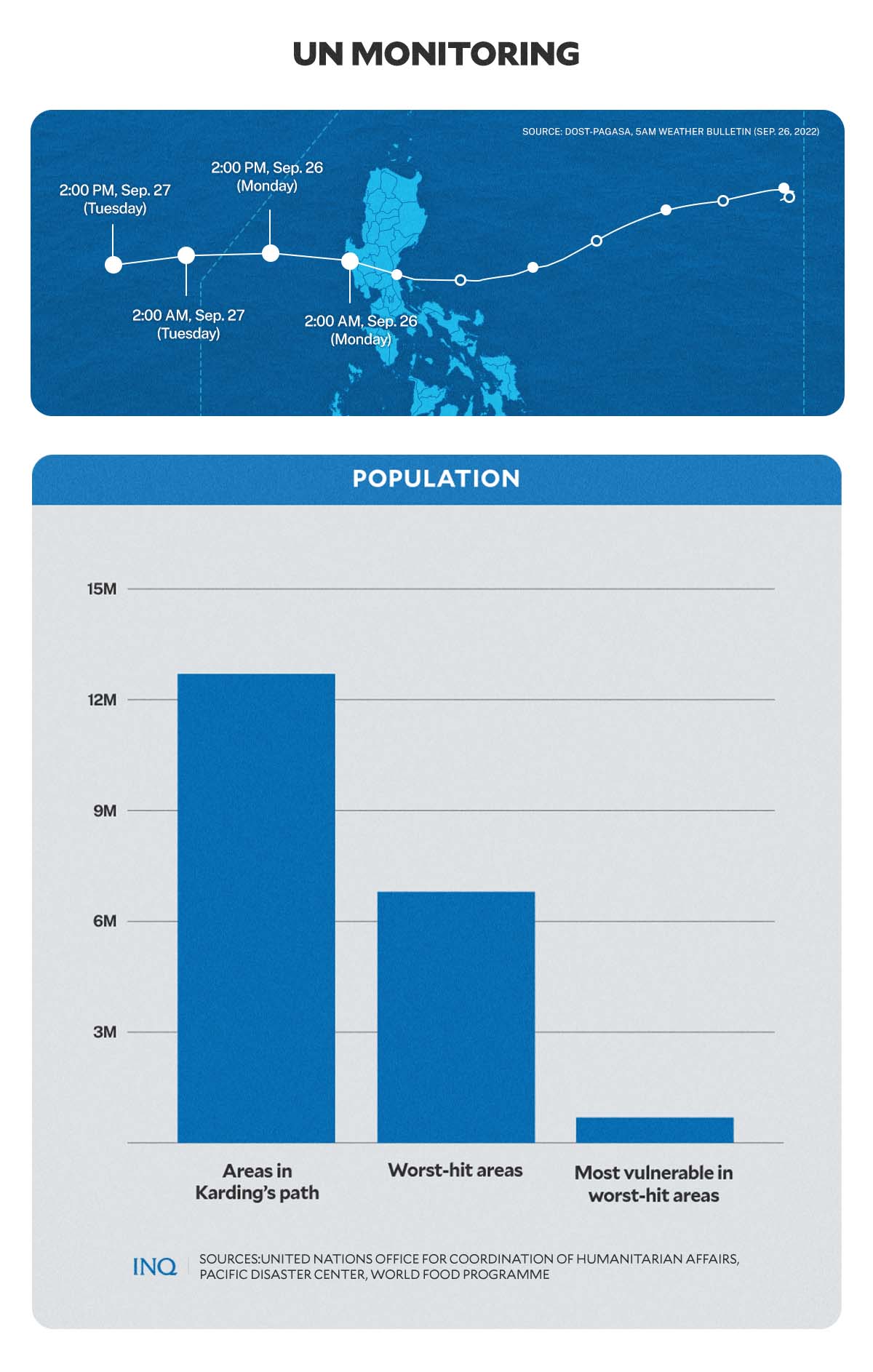 The UN-OCHA report underscored the number of people living in areas worst-hit and hit by Karding—including those living in utter poverty before the typhoon struck—and cities expected to experience widespread and catastrophic damage.

Initial information and data from the Philippines’ National Disaster Risk Reduction and Management Council (NDRRMC) were inconclusive about whether the UN-OCHA projection came to reality.

However, early information and numbers provided by the disaster-mitigating agency showed Karding’s impact to be massive and widespread.

Based on data from the Department of Social Welfare and Development’s (DSWD), as of 6 AM on Sept. 26, a total of 2,408 families or 9,765 persons were displaced or on the path of Karding in 154 villages in the regions of Cagayan Valley, Central Luzon, MIMAROPA (Occidental Mindoro, Oriental Mindoro, Marinduque, Romblon, and Palawan) and Bicol.

At a briefing on Monday (Sept. 26) morning, Social Welfare Secretary Erwin Tulfo reported to President Ferdinand Marcos Jr. that the DSWD and Office of Civil Defense evacuated between 10,000 and 13,000 families.

Tulfo added that food packs and other relief items had already been distributed to the displaced families.

READ: DILG: Over 19,000 families evacuated due to Typhoon Karding

At least 132 families or 594 persons are staying with relatives or friends outside evacuation centers.

In total, 2,370 families or 9,697 persons were displaced in Cagayan Valley, Central Luzon, MIMAROPA, and Bicol Region. 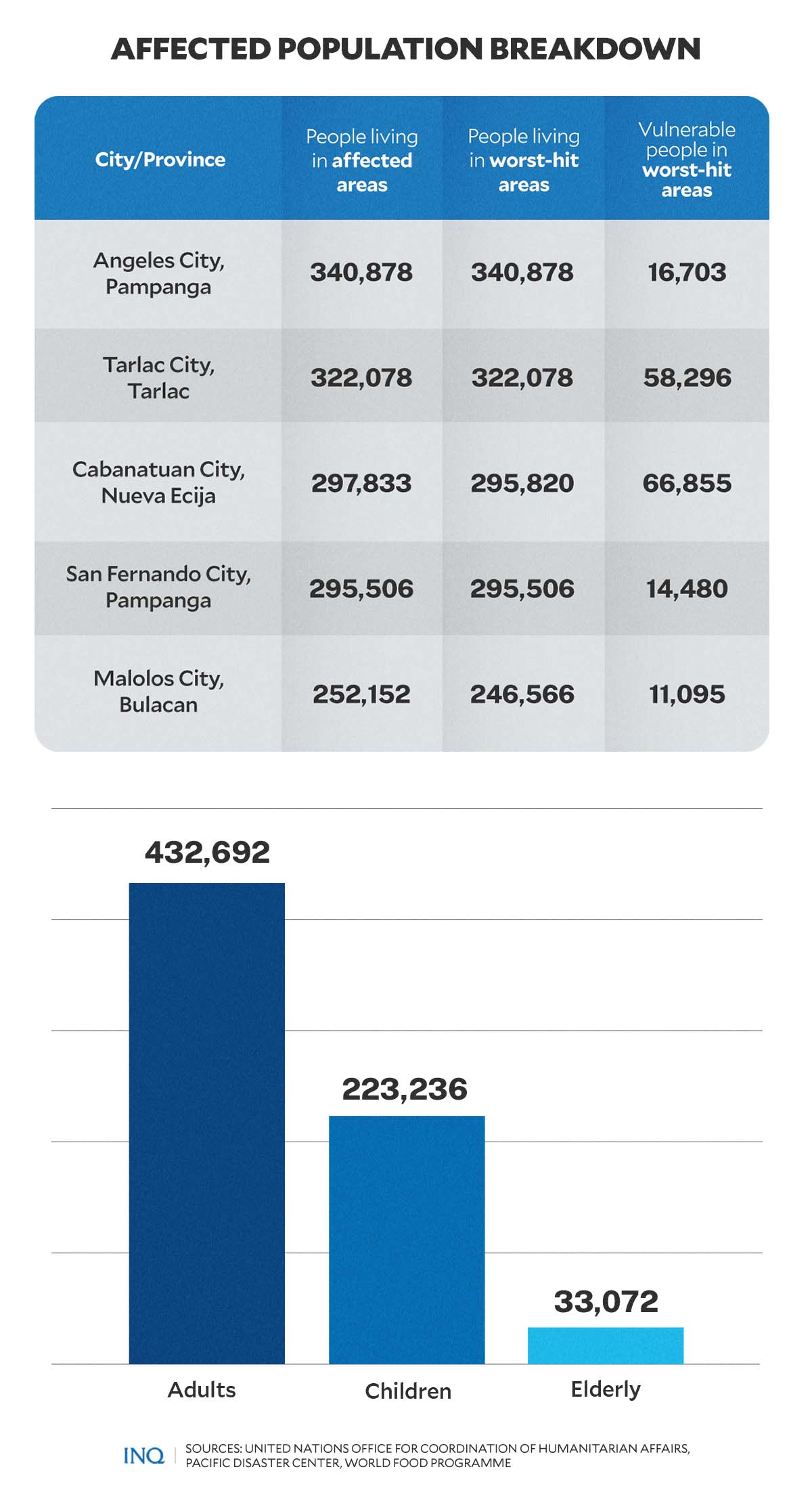 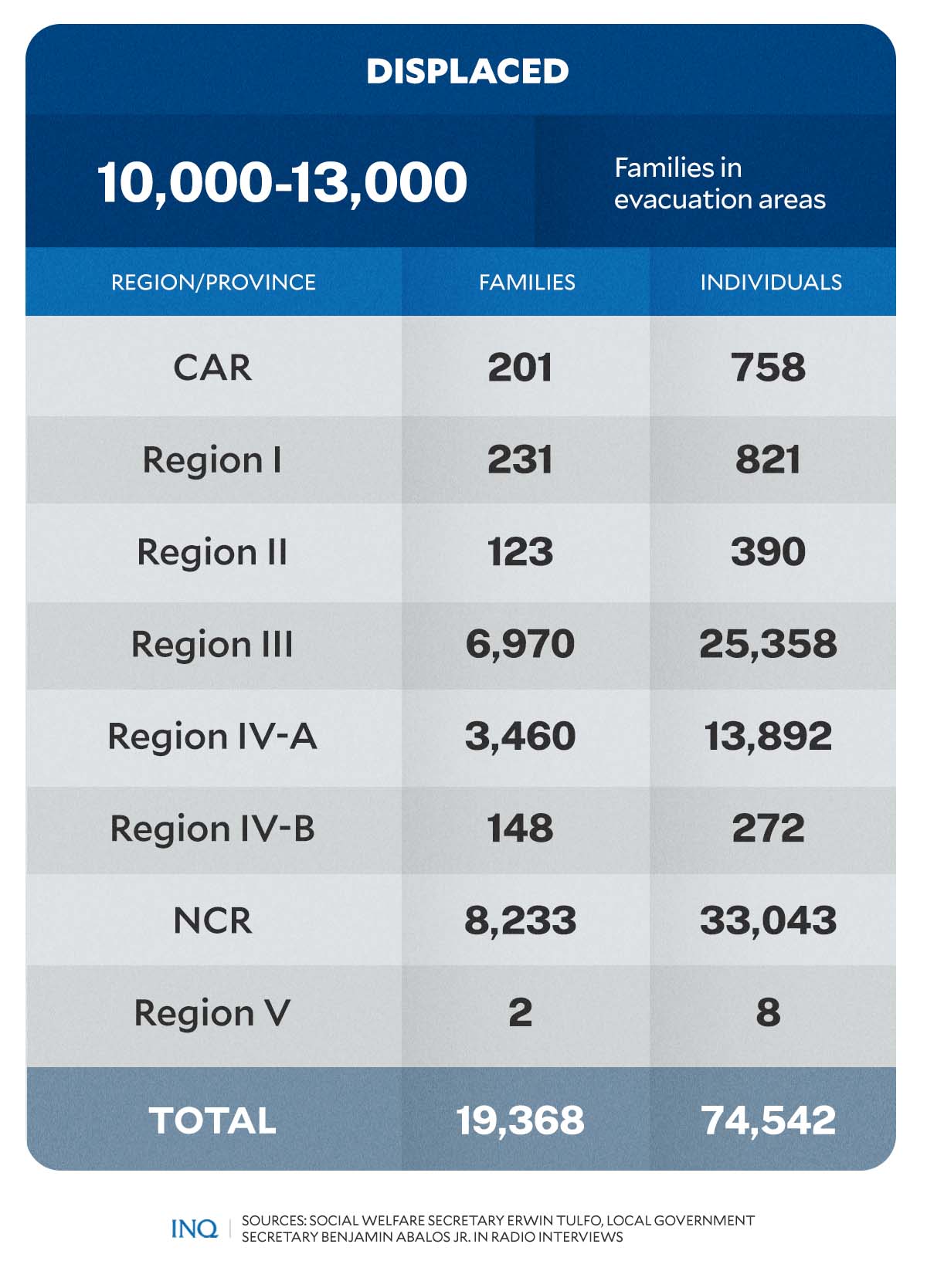 At the same briefing, Local Government Secretary Benjamin Abalos Jr. said a total of 19,368 families or 74,542 individuals had been evacuated in eight regions.

UN-OCHA estimated that at least 1.4 billion calories and 2.1 million liters of water per day, and 2.1 million square feet of shelter are required for those displaced by Karding

According to UN-OCHA, as harvest season is approaching for the areas that had been hit, at least 1.5 million hectares of rice farms and 218,000 hectares of corn may have suffered damage or expected to take a hit in production. 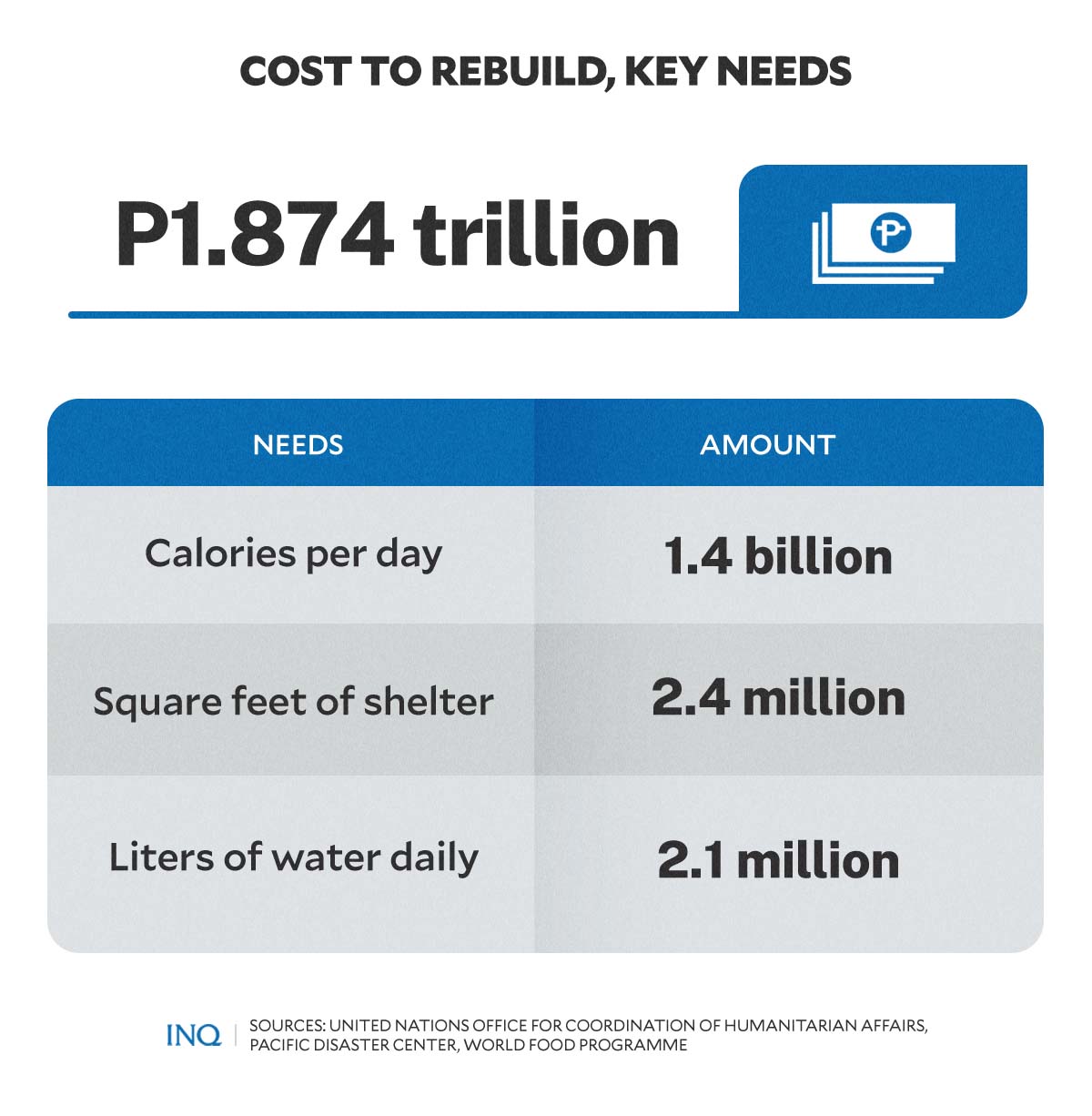 “FAO (Food and Agriculture Organization) is closely coordinating with the Department of Agriculture (DA) of storm’s impact on the agriculture sector,” UN-OCHA said.

The figures were similar to those in a bulletin released by the DA on Sunday noon.

The department said it was in coordination with LGUs and continues to issue advisories to other government agencies and farm leaders and communities.

As of noon on Sept. 26, the NDRRMC has yet to present data on deaths caused by Karding.

However, the Municipal Disaster Risk Reduction and Management Office (MDRRMO) of Guiguinto in Bulacan reported that five rescuers, who went missing at the height of the typhoon, had been found dead at the village of Kamias in San Miguel, a town also in Bulacan.

The NDRRMC has not yet updated the estimated cost of assistance provided to those who were hit by Karding.

The agency, however, earlier listed resources and assets prepositioned for the typhoon. These were:

For search, rescue and retrieval operations, the NDRRMC said it had deployed 50 teams to Cagayan Valley, Central Luzon, CALABARZON, Western Visayas, and CAR. There are also 275 personnel deployed to several regions, and 8,552 are on standby. 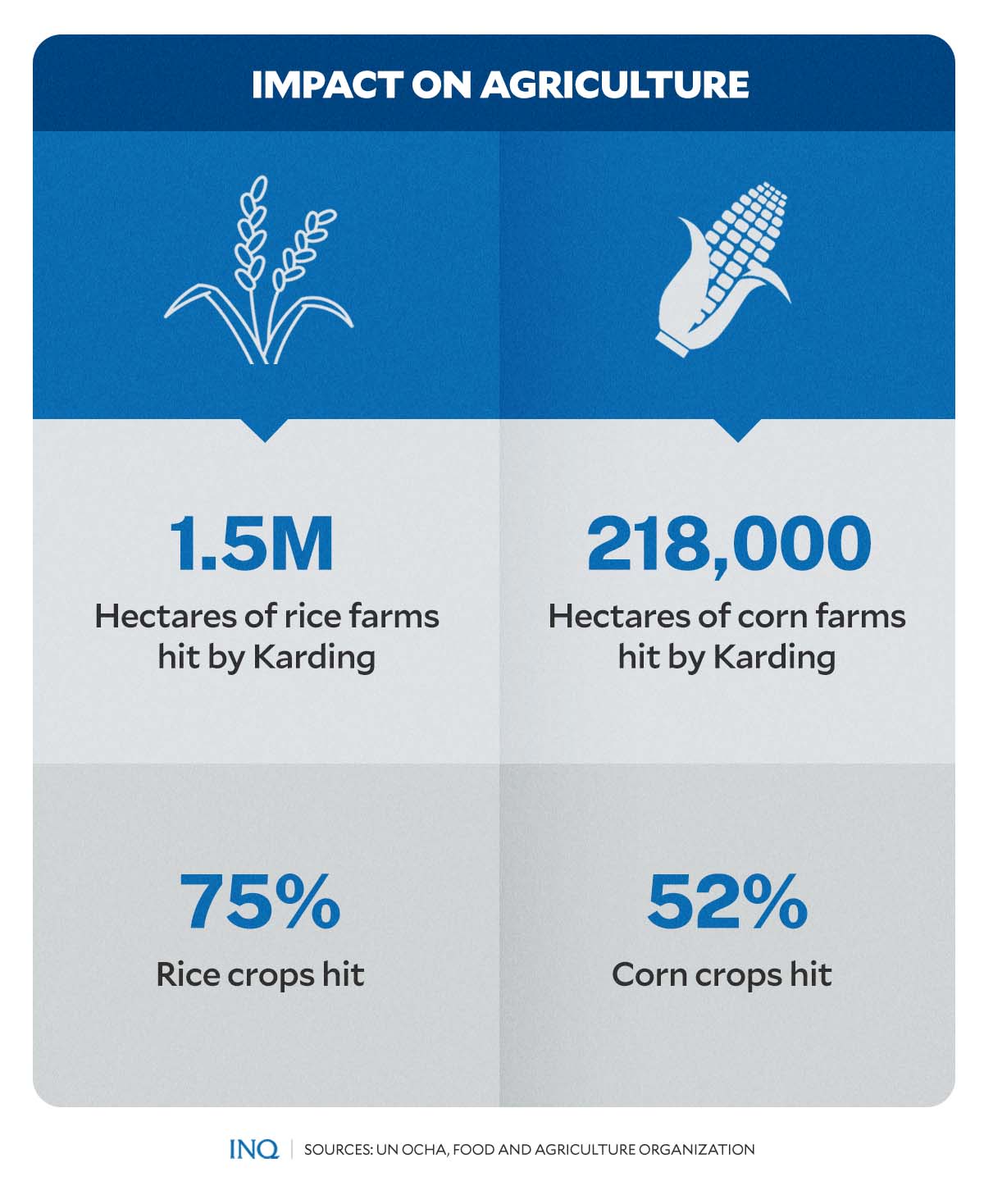 To keep law and order, at least 574 security forces had been deployed to Central Luzon and 11,491 personnel were on standby in Ilocos Region, Cagayan Valley, Central Luzon, CALABARZON, MIMAROPA, Bicol Region, CAR, and NCR.

There were also 2,798 different vehicles on standby and 10,553 road clearing and engineering machines, including 1,590 units of heavy equipment and 8,962 personnel.