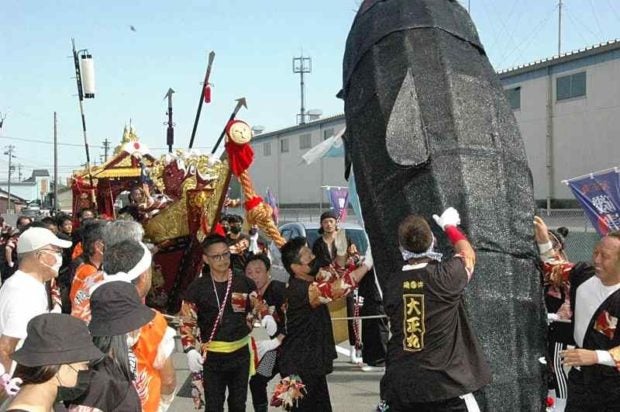 A whale boat chases a papier-mache whale object through the Isozu area of Yokkaichi, Mie Prefecture, on Saturday. The Japan News/Asia News Network

YOKKAICHI, Mie — A whale boat festival was held for the first time in 21 years in the Isozu area of Yokkaichi, Mie Prefecture, on Saturday.

The traditional Kujirabune Festival made a comeback to revitalize the district, where many people suffered from asthma due to the air pollution in the city. Spectators along the street were delighted and participants in the festival vowed to carry on the tradition.

The festival is said to have begun in 1920 as a shrine ritual to pray for a good fish catch, among other things. However, the festival had not been held since 2001 after a number of disruptions caused by slumps in the fishing industry and the worsening of pollution.

A whale boat, adorned with gold-leaf carvings, vermilion lacquer and other decorative items, excited the crowds as it was paraded through the district and chased a papier-mache whale.