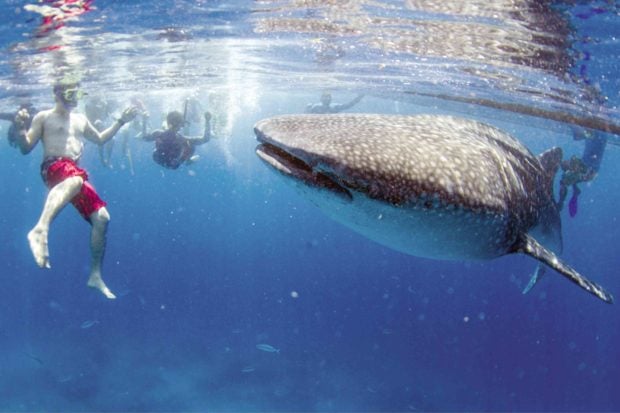 INTERACTION Whale sharks, which feed in waters around the Philippines, are known to be “gentle giants” of the sea and do not pose danger to humans. —FERDINAND EDRALIN / CEBU DAILY NEWS

DONSOL, SORSOGON, Philippines — As the annual Butanding Festival here kicked off last week, environmentalists and local officials expressed concern over the operation and exploration plan of two mining firms in nearby Albay province that could threaten the town’s tourism and efforts to conserve whale sharks (Rhincodon typus).

Donsol Mayor Josephine Alcantara-Cruz said the festival had been gaining ground since 2014, bringing in tourists and creating awareness on environment conservation to protect the migratory whale sharks that put this coastal town on the list of the country’s must-see destinations.

But Cruz, in a news conference on Friday, said she was concerned over the impact of mining in Albay, noting that mine waste could contaminate river channels linked to Donsol River.

A cement factory in the village of Palanog in Camalig, Albay, has been operating for close to two decades while another mining firm is seeking clearance from the Camalig government and the Department of Environment and Natural Resources’ Environmental Management Bureau (DENR-EMB) to conduct exploration.

Environmentalists were worried that mining operations, especially during the rainy season, could affect water quality in tributaries in Camalig and Jovellar towns, with dirty water reaching Donsol River, where krill abound.

Ronnel Dioneda, acting vice president for research development and extension of the Bicol University, in a study in 2016, indicated that krill and planktons, the whale shark’s food, grow abundantly in Donsol River that drains into Donsol Bay.

The river, Dioneda said, produces nutrients that sustain krill and planktons, which in turn attract migratory whale sharks to visit Donsol’s waters from March to May.

Cruz said she had consulted with the DENR in 2017 and brought to the agency’s attention the negative impact of mining operations in Albay on the town’s environment and tourism industry.

This prompted the DENR last year to hold a dialogue with local officials and other groups so local governments would be guided in managing their river channels. The dialogue also discussed the crafting of a comprehensive plan aimed at river conservation and protection measures.

“We are talking here not only of Donsol River but also of other rivers that link to us,” Cruz said.

Officials from the towns of Camalig, Daraga, Jovellar and Ligao City in Albay, and the towns of Pilar and Donsol in Sorsogon province attended the meeting.

Cruz said the six local government units should adopt measures to address potential problems on water pollution. “The problem [is] Donsol is just at the receiving end, [but] the towns affected, and we are talking here of five towns, [are] in two different provinces,” Cruz said.

But in a telephone interview on Sunday, Guillermo Molina, DENR-EMB regional director in Bicol, allayed fears that the cement plant’s operation in Camalig would lead to water pollution in river channels in Albay and Sorsogon. 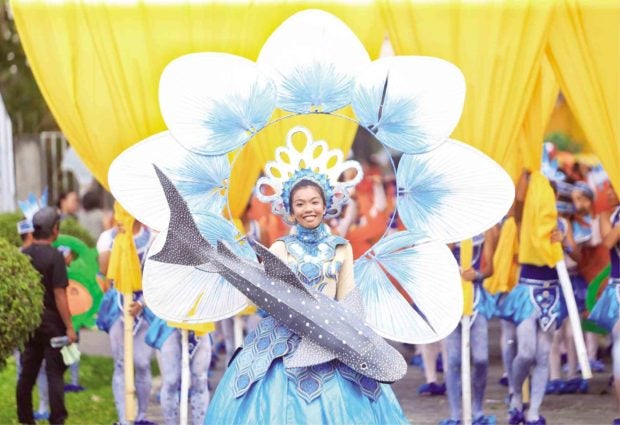 SORSOGON PRIDE The town of Donsol in Sorsogon celebrates Butanding Festival to highlight the importance of whale sharks (“butanding”) in promoting sustainable tourism and environmental awareness in the province. —MARK ALVIC ESPLANA

He said his agency was regularly monitoring and testing water quality in these rivers, including Donsol River.

“[The cement factory in Camalig] was established in 2000. As to river contamination and air pollution issues, these had been brought out in the past by residents of Camalig and the neighboring towns of Jovellar and other towns in the third district, but EMB records indicated that water and air pollution levels remained at the standard, safe levels,” Molina said.

He blamed local quarrying operations, which had been allowed by local governments in Albay and Donsol, for turning rivers murky during rainy days.

Cruz said Donsol had asked its partner, World Wide Fund for Nature (WWF, formerly World Wildlife Fund), to help initiate a measure that would benefit the six localities while protecting the “butanding” and other marine resources.

The International Union for the Conservation of Nature Red List classifies the whale shark as endangered, based on a global assessment in 2016. It described the whale shark’s population as “decreasing.”

The Donsol field office of WWF Philippines recorded 87 whale sharks in the town’s waters since January.

Joel Palma of WWF Philippines said that his agency had partnered with Donsol to promote environmental stewardship and sustainable tourism, while discouraging harmful fishing practices and the hunting of whale sharks.

“With 21 years of conservation work, the partnership has allowed both the whale shark and the local community to flourish. This renewal also promises to bring progress and prosperity to Donsol for more years to come,” Palma said.

Local government data showed that Donsol’s earnings from its 5-percent share from boat rentals for butanding interaction were P3.36 million in 2017 and P2.05 million in 2018. From January to April this year, the town earned P2.37 million.

Records from the Donsol tourism office showed 13,304 tourists visited the town from January to May this year, more than the 10,562 visitors during the same period last year.—With a report from Rey Anthony Ostria