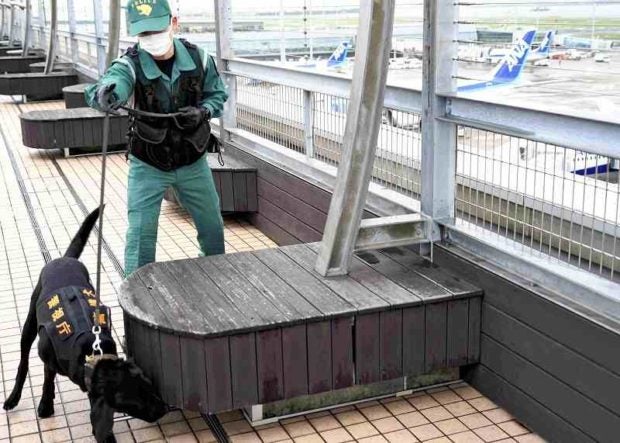 A police officer searches for any suspicious object along with a dog at Tokyo’s Haneda Airport on Saturday. The Japan News/Asia News Network

Vowing to take all possible security measures, a senior official at the Metropolitan Police Department said that the funeral at the Nippon Budokan hall in Tokyo “will be the first step toward restoring trust” in police authorities.

According to sources within the Tokyo police, around 20,000 police members will be deployed for the event, exceeding around 18,000 personnel deployed at the time of a summit under the Quad security framework among Japan, the United States, Australia and India in the Japanese capital in May.

“The meaning of the existence of the police would be called into question” if police fail again, MPD Superintendent General Yoshihiko Oishi has said.

Over 2,000 personnel from prefectural police departments throughout Japan will also be deployed for the funeral for Abe, gunned down in broad daylight during a street speech.

“We must not let anything unexpected happen,” a senior MPD official said, promising to ensure safety throughout the ceremony.

Police units have already been stationed at major train stations and other locations in Tokyo.

Ahead of the arrival of foreign dignitaries to Japan, the police on Saturday searched for any suspicious objects, such as explosives, along the Metropolitan Expressway route connecting the heart of Tokyo with Haneda Airport.

A report by the National Police Agency last month said that police authorities had virtually copied and pasted from past security plans to compile a security plan for Abe for the stump speech in Nara City, where he was shot.

“We are conducting thorough checks so that we do not blindly follow past plans,” another senior MPD official said, stressing that the Tokyo police are perusing the security plans for the funeral to see whether there are any holes in them.

Opposition parties are ramping up criticism of the government’s decision to hold the state funeral. Protests have been held by people against the event.

“The mood within the country right now poses a risk of breeding a mindset justifying an attack,” the official warned.

On high alert for independent acts of violence by individuals, the police are collecting information on suspicious social media posts and purchases of guns and ingredients for explosives.

On the day of Abe’s state funeral, crowds of people are expected to gather around the Nippon Budokan hall in Chiyoda Ward. Protests against the funeral are scheduled to be held, while an altar will be set up near the hall so that members of the public will be able to lay flowers.

A large number of police personnel will be stationed in the area around the hall to look out for any suspicious people in the crowds and prevent any troubles.

The police are also preparing to guard a line of cars transporting Abe’s remains from his home in Tokyo’s Shibuya Ward to Nippon Budokan. The cars are expected to stop at several locations that were important to Abe.

“We will implement tight security along the route as well,” the MPD official said. “We cannot let any problem happen again.” Jiji Press via The Korea Herald/Asia News Network