DOJ bid to brand Reds as terrorists falters, but seen as trigger in red tag killings 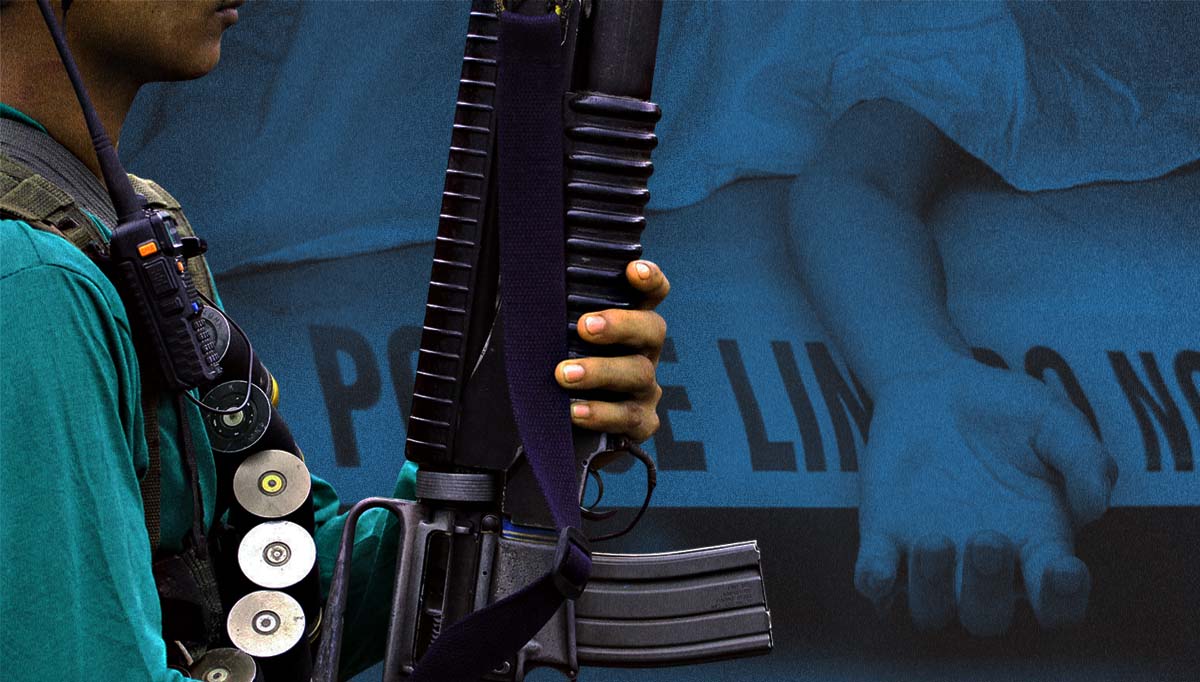 MANILA, Philippines—Back in 2018, 649 individuals had been listed as terrorists by the Department of Justice (DOJ) in its court petition to declare the Communist Party of the Philippines and its armed wing New People’s Army as terror groups.

It was a proscription case, which means a petition to ban the organizations.

On Feb. 21 that year, the DOJ, then headed by Vitaliano Aguirre, filed the case at the Manila Regional Trial Court (RTC) seeking a ruling in favor of declaring CPP and NPA as groups involved in terrorism.

But human rights group Karapatan said the 55-page DOJ petition sought not only to put an official terror tag on CPP and NPA, it also wanted more than 600 persons as terrorists, too. The list of names included those of individuals, who went dead or missing after they had been red-tagged by authorities.

Cristina Palabay, Karapatan secretary general, said the DOJ list could have been akin to the then Duterte administration “digging graves and pushing rights defenders into the pit.”

The list, which the DOJ admitted had not been vetted, was met with condemnation, with the National Union of People’s Lawyers (NUPL) saying that it was a “fishing expedition that trifled with lives, security and reputations.”

On Jan. 3, 2019, the DOJ pared down the list to only eight individuals in an amended petition. But the original list, according to the prisoners’ rights group Kapatid, had already led to the arrest, detention “and even murders” of activists. 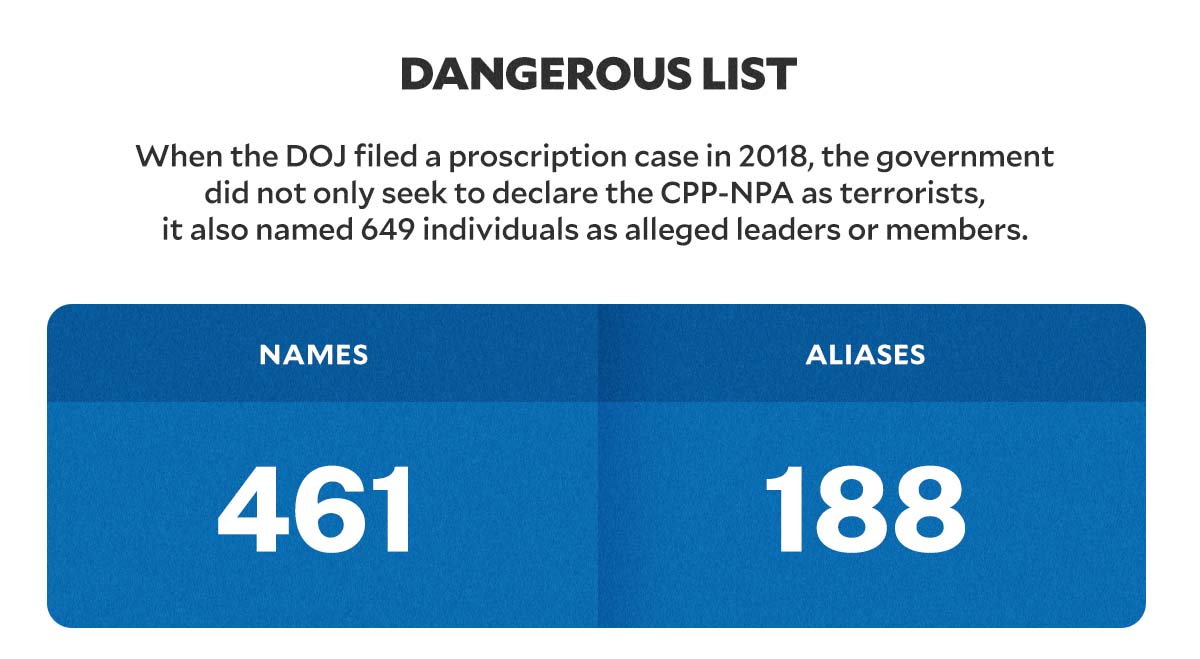 On Feb. 1, 2019, the Manila RTC trimmed the list down to only two names—Jose Maria Sison and Antonio Cabantan—but only for the purpose of serving summons to CPP and NPA.

But Palabay said the court action was “not a reprieve.” “So long as the proscription case remains, it will further fuel and justify the government’s obsession to crack down on progressive groups,” she said.

The DOJ proscription case had 461 names and 188 aliases that it linked to CPP and NPA, which Karapatan said will have a chilling effect on human rights workers with 46 of them on the list of individuals tagged as terrorists.

One of the 46, Palabay said, was Zara Alvarez, a research and advocacy officer of the Negros Island Health Integrated Program and former campaign and education director of Karapatan-Negros.

Alvarez had been eventually removed from the list, but it was too late. Karapatan said the list had already achieved its feared effect—incite violence against the persons who had been described as terrorists even without vetting by the DOJ.

How did these individuals end up on the list? Karapatan said the process was “very arbitrary, malicious and highly irresponsible.” “This is just the start of a long crusade against rights defenders,” the group said.

The effect on Alvarez came on Aug. 17, 2020. That day, she was shot and killed by still unidentified assailants as she headed home at the village of Mandalagan, Bacolod City.

According to previous reports, Alvarez had been one of six individuals—rights activists, peace consultants and a former priest—who had been killed since Jan. 30, 2019, less than a year after the DOJ filed the proscription case in court with the individuals’ names as terrorists.

Malayao, a peace consultant for the National Democratic Front of the Philippines (NDFP), was heading for Isabela province when he was shot dead inside a bus in Nueva Vizcaya province on Jan. 30, 2019.

Police said that the unidentified assailant, who boarded the bus when it made a stop in Aritao, fired two shots. The killer got off the bus after shooting Malayao, boarded a getaway vehicle with an accomplice and had never been identified, much less arrested, ever since.

Echanis, a peace consultant and longtime peasant leader, was killed inside his home in Novaliches, Quezon City on Aug. 10. 2020, seven days before the murder of Alvarez.

The Commission on Human Rights said then that Echanis was made to suffer before he was eventually killed by the still unidentified suspects: “We saw that Randall Echanis suffered 15 wounds,” a CHR commissioner had told ANC.

Topacion and Magpantay, both peace consultants, were killed on Nov. 25, 2020 in what their relatives said was a “tokhang-style” murder. Police had said the couple fought but relatives wondered how the two “elderly and sickly” persons could resist.

The two were killed inside their home in Angono, Rizal province in what the Philippine National Police-Criminal Investigation and Detection Group reported as a gunfight.

The PNP said that police were about to serve four search and two arrest warrants on the couple, who resisted and exchanged fire with the law enforcement. This was denied by the couple’s son, lawyer VJ Topacio.

Tan, a former priest and a peace consultant, was shot dead while sleeping inside his home on May 28, 2021 in Cebu province. He suffered gunshot wounds mainly in the face and neck, indicating he was shot close range.

The killings prompted Karapatan to call on the CHR to conduct an investigation, stressing “we strongly denounce their abhorrent and brutal killings, especially in relation to their involvement in the GRP-NDFP peace process, the trumped-up charges filed against them, and the circumstances of their killings.”

Gov’t fails in its bid

Last Sept. 21, the Manila RTC dismissed the DOJ petition, which was filed when the Human Security Act of 2007 (HSA) was still in effect, saying that the nine incidents cited by the DOJ to back its petition could not be traced back to the CPP and NPA.

It said eyewitnesses had no positive ID of those linked to CPP and NPA except for their clothing—all black—which the court said was insufficient to conclude membership in the two insurgent groups.

The court stressed that no evidence was presented by the witnesses—supposedly former rebels—pointing to an official directive of attacks from CPP and NPA and nine incidents being cited as terror attacks by the DOJ. 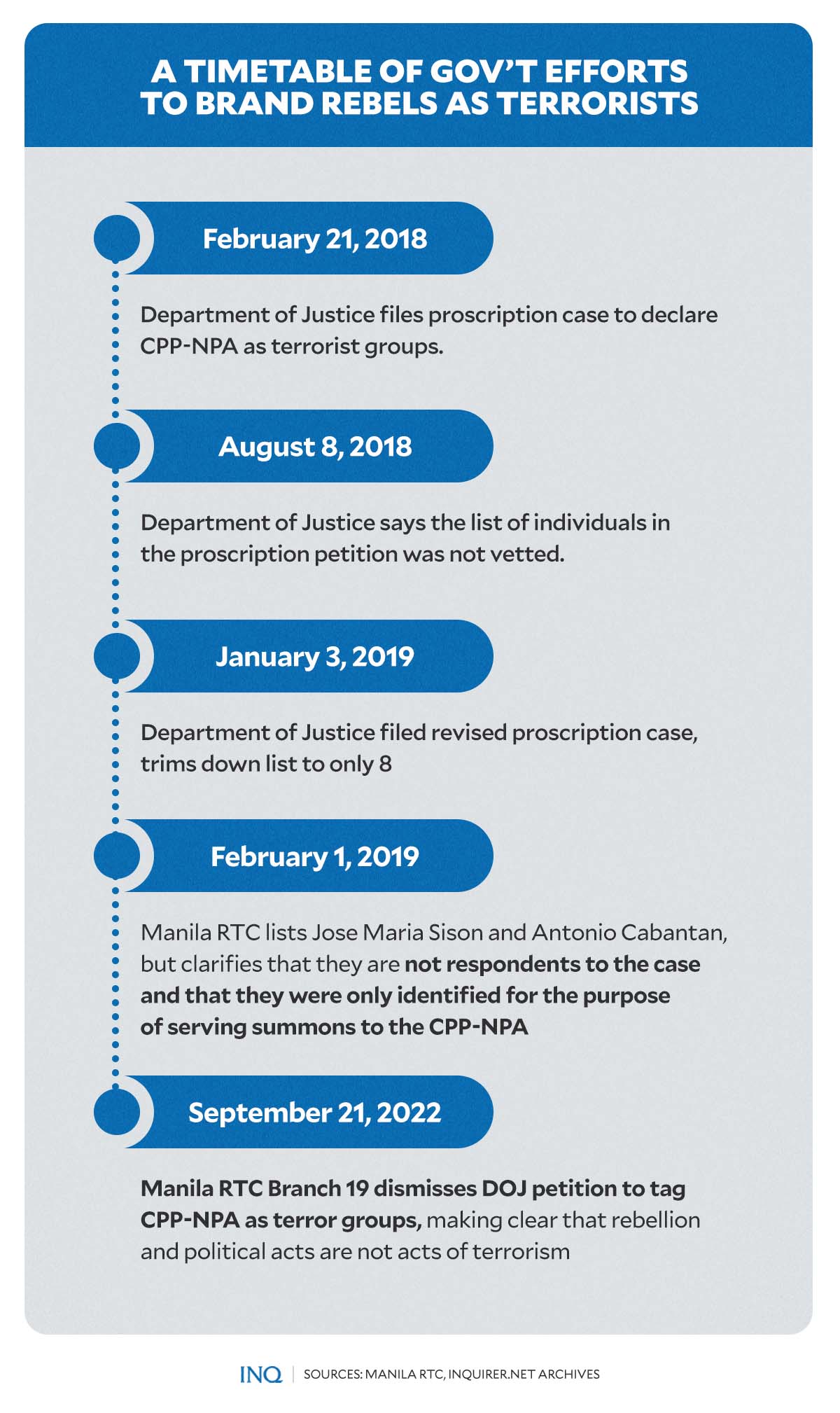 Judge Marlo Magdoza-Malagar, who wrote the 135-page decision, said CPP and NPA had not been formed for the purpose of terrorism.

“While the armed struggle, with the violence that necessarily accompanies it, is indubitably the approved means to achieve the CPP-NPA’s purpose, means is not synonymous with purpose,” she said.

“Stated otherwise, armed struggle is only a means to achieve the CPP’s purpose—it is not the purpose of the creation of the CPP.”

The HSA has been replaced by the more controversial Anti-Terrorism Act (ATA) of 2020. However, as stated in the “saving clause” of the ATA, all judicial decisions and orders prior to its passage on July 3, 2020, remained valid and effective as they were related to the HSA.

The RTC said that this implies that key parts of the repealed law, particularly its definition of “terrorism,” “terrorist acts,” or “terrorist groups” shall “hold sway” in actions that may be pending in courts.

Justice Secretary Jesus Crispin Remulla said the DOJ will appeal the decision: “Manila court junks proscription? We will file an MR (motion for reconsideration), then if we have to, we will go to the CA (Court of Appeals).”

Menardo Guevarra, who succeeded Aguirre as justice secretary, said in 2018 that “I’d like to clarify the petition for proscription under the Human Security Act was filed by the Department of Justice versus two entities, the NPA and the CPP.”

“The inclusion or the fact that several hundreds of individuals who were named in that petition was based on information supplied solely to the department by the intelligence agencies of the government,” he said.

Lawyer Edre Olalia, president of NUPL, told INQUIRER.net that some of those who were implicated had been killed, while some had been arrested and detained, like peace consultants Vicente Ladlad, and Alexander and Winona Birondo.

The RTC stated in its decision that red-tagging was dangerous and threatened the safety of activists, stressing that members of national democratic mass organizations back ““valid societal change” without necessarily considering “armed struggle” or violence to overthrow the government as means to achieve it.

“[P]utting the ‘communist label’ on one who may not be a member or on one who, even if a member, may not have participated in the actual act of taking up arms against the government, poses a serious concern,” the judge said.

“Activism is what activists do; that is, it encompasses the methods they use in order to bring about the desired change. Activism is a political act, by which an informed citizenry expresses and works for change in an array of political issues that affect them.”

It said that activism was “an important part of the democratic process where individuals and communities exercise their right to shape government policy and ultimately, society.”

Rebellion is rooted, the RTC said, in discontent over the existing order seen to be “unjust and inequitable to the majority, and favorable to the wealthy, ruling few” and that the lack of avenues to be heard was what compelled rebels to resort to violence in an attempt to change status quo.

Section 3 of the HSA stated that any person who commits an act punishable under provisions of the Revised Penal Code, such as rebellion or insurrection and murder, is deemed to have committed terrorism.

But the Manila RTC Branch 19 ruling said the nine terror attacks being cited by the DOJ proscription case took place only in some areas in Mindanao.

“Any fear and panic these incidents may have caused are confined to the communities where they have occurred,” the court said, stressing that it has not reached the “widespread” and “extraordinary” proportions contemplated by the law.

“Perhaps contributing to the low impact of the foregoing atrocities is the CPP-NPA’s chosen battle strategy which is guerrilla warfare within the context of a protracted people’s war,” the court said, adding that “the nine incidents of atrocities fall within the category of small-time ‘hit and run’ attacks and sporadic acts of violence with no specified victims or targets.”

“Guerrilla warfare is not synonymous with terrorism,” the court stated in its decision.

The terror attacks cited by the DOJ included five separate killings of multiple datus, an abduction, an ambush, a failed assassination attempt, and the burning of a chapel and houses in the provinces of Surigao del Sur, Agusan del Sur, Bukidnon, Misamis Oriental and in Cagayan de Oro City in 2019 and 2020.

“Not having met the stringent requirements of HSA of 2007, the nine acts of atrocities committed by NPA can only qualify as incidents of ‘rebellion,’” the RTC said.

“While rebellion is one of the predicate crimes of terrorism, one cannot absorb the other as they have different elements.”

Kapatid said that “the proscription petition in effect was not only a blacklist but a death warrant for targeted activists.”

“We feel vindicated by the decision of Judge Malagar. We see it as a landmark decision that hearkens to the 1956 Supreme Court ruling on Amado V. Hernandez, which absorbed various offenses into the single political act of rebellion.”

“Yet political prisoners today are no longer charged with rebellion but non bailable common crimes to deny the real political nature of their case and to demonize them as common criminals,” it said.