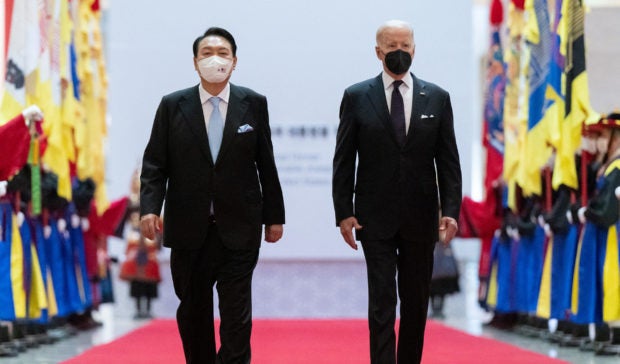 FILE PHOTO: South Korean President Yoon Suk-yeol (center, L) and US President Joe Biden arrive for a state dinner at the National Museum of Korea in Seoul on May 21, 2022. (Photo by SAUL LOEB / AFP)

Yoon Suk-yeol was overheard on a hot mic and seen on camera seemingly insulting US lawmakers shortly after briefly meeting with US President Joe Biden at the Global Fund in New York.

“How could Biden not lose damn face if these fuckers do not pass it in Congress?” he appeared to be saying about Biden’s drive to increase the US contribution to Global Fund, which would require congressional approval.

The footage quickly went viral in South Korea, with a YouTube video racking up five million views in less than a day and the Korean expletive Yoon purportedly used trending on Twitter.

But president’s office spokeswoman Kim Eun-hye said Yoon had “no reason to talk about the US or utter the word ‘Biden'”.

Speaking at a press briefing in New York on Thursday, Kim claimed that Yoon did not actually say “Biden” but a similar-sounding Korean word, and that he was referring to South Korean, not US, lawmakers.

One ruling-party parliamentarian suggested the television station that first reported the hot-mic comments should be prosecuted.

“MBC should gravely be held accountable for its report that has damaged the irreplaceable US-Korea alliance,” wrote MP Yoon Sang-hyun on his Facebook account.

But online, many expressed doubt about the government’s response.

“It is utterly shameful and embarrassing for our kids that our presidential office has come up with such an excuse,” one commentator wrote on YouTube.

The United States is South Korea’s key security ally, with Washington stationing about 27,000 troops in the country to help counter nuclear-armed North Korea.

Yoon, a former prosecutor, is struggling with low domestic approval ratings, with the latest survey Friday after the hot-mic incident showing it stood at 28 percent.