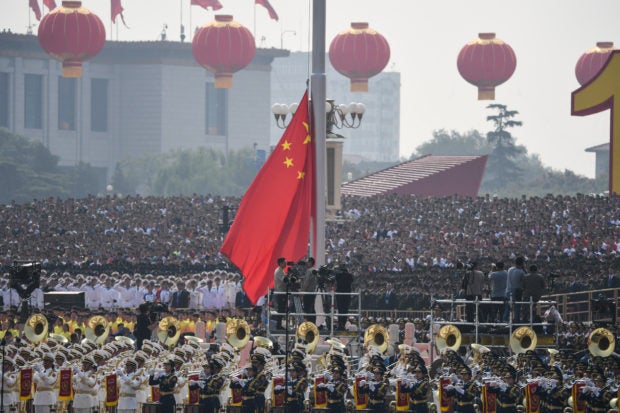 FILE PHOTO: A Chinese national flag is raised during a military parade at Tiananmen Square in Beijing on October 1, 2019. (File Photo by Greg BAKER / AFP FIle)

BEIJING — A Chinese former top security official faces life in jail after a court on Friday hit him with a suspended death sentence for bribery and other crimes, adding to a flurry of corruption verdicts in recent days.

Sun Lijun’s death sentence will be commuted to life imprisonment after two years, according to a statement by the Intermediate People’s Court in the city of Changchun.

Chinese authorities have announced a spate of high-profile sentences this week, as a sprawling anti-graft campaign kicks into high gear ahead of a crucial political meeting next month, where President Xi Jinping is expected to secure an unprecedented third term.

The court said Sun, who previously served as vice-minister of public security, had abused his power in a number of influential positions between 2001 and 2020.

The 53-year-old pleaded guilty in July to accepting more than 646 million yuan ($91 million) in bribes.

“(He is) deprived of political rights for life and all personal property should be confiscated,” the court said.

His other offenses included manipulating the securities market and illegally owning firearms, according to the statement.

In the decade since he rose to power, Xi has waged a campaign against corruption in the ruling Communist Party.

On Thursday, China’s former justice minister was sentenced to life for taking bribes worth more than 117 million yuan.

And three former police chiefs were given harsh sentences for corruption on Wednesday, accused of being part of Sun’s “political clique.”

China senior official gets life in prison for bribery