NASA gears up to deflect asteroid, in key test of planetary defense 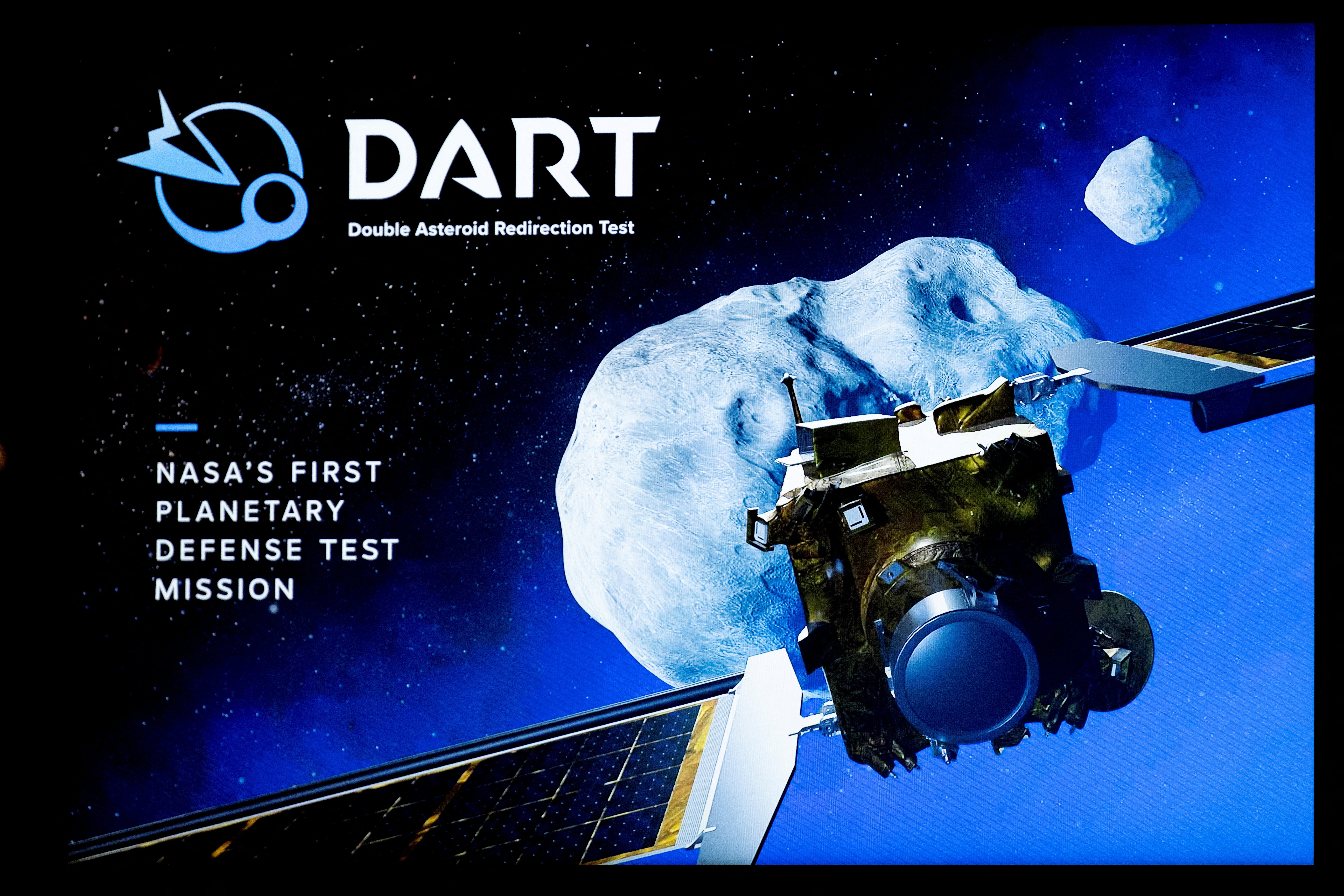 (FILES) In this file photo taken on September 12, 2022 A placard hangs on the wall during the Double Asteroid Redirection Test (DART) Technology Media Workshop Telecon Briefing and tour at the Johns Hopkins Applied Physics Laboratory in Laurel, Maryland, ahead of the September 26 project test mission. – NASA on Monday will attempt a feat humanity has never before accomplished: deliberately smacking a spacecraft into an asteroid to slightly deflect its orbit, in a key test of our ability to stop cosmic objects from devastating life on Earth. (Photo by Jim WATSON / AFP)

WASHINGTON — Bet the dinosaurs wish they’d thought of this.

NASA on Monday will attempt a feat humanity has never before accomplished: deliberately smacking a spacecraft into an asteroid to slightly deflect its orbit, in a key test of our ability to stop cosmic objects from devastating life on Earth.

The Double Asteroid Redirection Test (DART) spaceship launched from California last November and is fast approaching its target, which it will strike at roughly 14,000 miles per hour (23,000 kph).

To be sure, neither the asteroid moonlet Dimorphos, nor the big brother it orbits, called Didymos, pose any threat as the pair loop the Sun, passing some seven million miles from Earth at nearest approach.

But the experiment is one NASA has deemed important to carry out before an actual need is discovered.

“This is an exciting time, not only for the agency, but in space history and in the history of humankind quite frankly,” Lindley Johnson, a planetary defense officer for NASA told reporters in a briefing Thursday.

If all goes to plan, impact between the car-sized spacecraft, and the 530-foot (160 meters, or two Statues of Liberty) asteroid should take place at 7:14pm Eastern Time (2314 GMT), and can be followed on a NASA livestream.

By striking Dimorphos head on, NASA hopes to push it into a smaller orbit, shaving ten minutes off the time it takes to encircle Didymos, which is currently 11 hours and 55 minutes — a change that will be detected by ground telescopes in the days that follow.

The proof-of-concept experiment will make a reality what has before only been attempted in science fiction — notably films such as “Armageddon” and “Don’t Look Up.”

As the craft propels itself through space, flying autonomously for the mission’s final phase like a self-guided missile, its main camera system, called DRACO, will start to beam down the very first pictures of Dimorphos.

“It’s going to start off as a little point of light and then eventually it’s going to zoom and fill the whole entire field of view,” said Nancy Chabot of Johns Hopkins Applied Physics Laboratory (APL), which hosts mission control in a recent briefing.

“These images will continue until they don’t,” added the planetary scientist.

Minutes later, a toaster-sized satellite called LICIACube, which separated from DART a couple of weeks earlier, will make a close pass of the site to capture images of the collision and the ejecta — the pulverized rock thrown off by impact.

LICIACube’s picture will be sent back in the weeks and months that follow.

Also watching the event: an array of telescopes, both on Earth and in space — including the recently operational James Webb — which might be able to see a brightening cloud of dust.

Finally, a full picture of what the system looks like will be revealed when a European Space Agency mission four years down the line called Hera arrives to survey Dimorphos’s surface and measure its mass, which scientists can only guess at currently.

Very few of the billions of asteroids and comets in our solar system are considered potentially hazardous to our planet, and none in the next hundred or so years.

But “I guarantee to you that if you wait long enough, there will be an object,” said Thomas Zurbuchen, NASA’s chief scientist.

We know that from the geological record — for example, the six-mile wide Chicxulub asteroid struck Earth 66 million years ago, plunging the world into a long winter that led to the mass extinction of the dinosaurs along with 75 percent of species.

An asteroid the size of Dimorphos, by contrast, would only cause a regional impact, such as devastating a city, albeit with a greater force than any nuclear bomb in history.

Scientists are also hoping to glean valuable new information that can inform them about the nature of asteroids more generally.

How much momentum DART imparts on Dimorphos will depend on whether the asteroid is solid rock, or more like a “rubbish pile” of boulders bound by mutual gravity, a property that’s not yet known.

We also don’t know its actual shape: whether it’s more like a dog bone or a donut, but NASA engineers are confident DART’s SmartNav guidance system will hit its target.

If it misses, NASA will have another shot in two years’ time, with the spaceship containing just enough fuel for another pass.

But if it succeeds, then it’s a first step towards a world capable of defending itself from a future existential threat, said Chabot.

Read Next
2 rape suspects nabbed in Angeles City
EDITORS' PICK
US has ‘many requests’ on Edca, Bongbong Marcos says
Bongbong Marcos: Oil search in West PH Sea may skip ‘gov’t to gov’t’ talks
House energy committee chair Arroyo bats for cheap electricity
The vivo Y16 makes the season of giving more thoughtful for the whole family
The Best Tech Gifts For The 2022 Holidays
Fare card prices soar amid shortage
MOST READ
Don't miss out on the latest news and information.