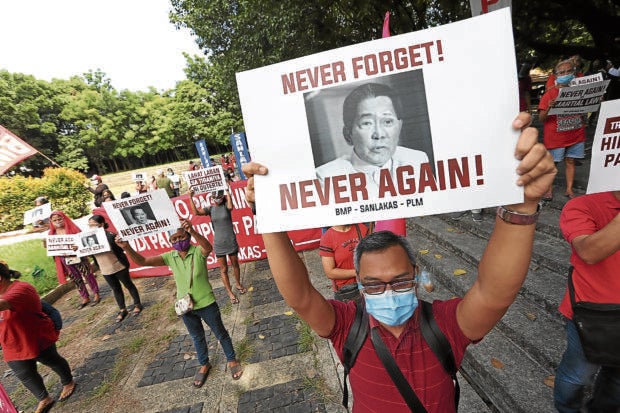 For Brosas, Enrile’s proposition is an insult to thousands of martial law victims.

Enrile on Wednesday suggested the scrapping of the 1987 Constitution, reemploying the 1935 charter, and restoring “imminent danger” as sufficient ground for the declaration of martial law before the Senate committee on constitutional amendments and revision of codes.

The Senate panel is conducting public hearings amid moves to amend the post-martial law Constitution and change the government system.

“This proposal spits on the graves of the thousands of martial law victims who died fighting for the Filipino people’s rights during Marcos Sr.’s regime,” Brosasa said.

(It hasn’t even been 100 days since the Marcoses and their minions assumed office, and their true agenda is already showing – to centralize all powers again into the President’s hands.)

She further argued that the government should not use fear of rebellion and insurgency as an excuse to grant absolute power to the President.

(This is not the solution to the country’s grave problems like rising unemployment, poverty, and the lacking funds for public service.)

Women under the 1935 Constitution

Brosas pointed out that the 1935 Constitution was “anti-women” as it did not allow female citizens to vote.

(The women’s right movement has already come a long way, and we will not allow ourselves to be forced to take steps backward and have our decades-long fought rights stripped away.)

She then vowed that the Gabriela party-list would continue to oppose attempts “to tinker or overhaul the 1987 Constitution,” especially as they discovered a P30-million allocation for constitutional reform in the proposed budget of the Department of Interior and Local Government.

“We urge the Filipino people to resist attempts to distort history and bring the nation back into yet another dark era of violence and brutality under martial law,” Brosas said.