CHR: Martial law isn't a relic, it has lessons to teach | Inquirer News

CHR: Martial law isn’t a relic, it has lessons to teach 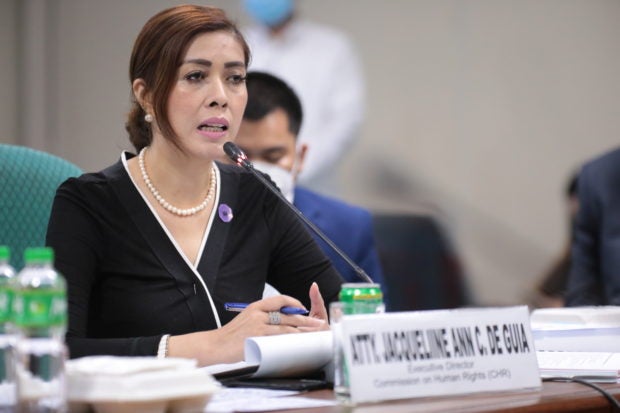 MANILA, Philippines — The pains of the martial law era under the late former president Ferdinand Marcos Sr. are being remembered not because of the people’s fixation on the past but rather to ensure that lessons are learned, the Commission on Human Rights (CHR) said on Wednesday.

At the commemoration of the 50th anniversary of martial law, CHR Executive Director Jacqueline de Guia stressed the importance of remembering that time period in order to teach the Filipino people the value of democracy.

“[CHR] joins the country in remembering this day—the sacrifices of Filipinos, both sung and unsung—as well as to remind the important place of democracy, rule of law, and human rights in a free society in ensuring that the dignity and rights of all are respected and upheld,” De Guia said in a statement.

“CHR stands today as an embodiment of the lessons from the past — that we must be vigilant against abuses in power and defend our rights. We remember not because we are stuck but because there are lessons to remember and teach present and future generations. We remember so that democracy will endure and, together, we become a better nation,” she added.

“Being stuck in the past” is a common phrase coming from supporters of the Marcoses, it is one of the most propagated accusations over social networking sites, especially during the presidential bid of the late president’s son, his namesake and incumbent President Ferdinand Marcos Jr.

The Marcoses’ defenders say their opponents should stop dwelling in the past and start looking forward.

Many activists and opposition figures were arbitrarily incarcerated, tortured, slain, or abducted and then mysteriously vanished during this time period; nevertheless, CHR emphasized that knowing the truth is vital since it would help solve the wrongs of that era, especially human rights abuses.

“Even at present, we continue to stress the value of truth and truth-seeking in addressing human rights violations. Without truth, there can be no justice. And as time can make memories vulnerable, we call on every Filipino to similarly protect our history and the truth captured in the country’s collective experience during the 1972 martial law as an important facet of achieving transitional justice,” De Guia said.

“CHR will remain steadfast in our independent mandate of being a conscience of government and the people, a beacon of truth, educator on human rights, and guide of the nation towards actions that respect the rights of all, especially those who cannot defend themselves—the least, last, and lost,” she added.

On Wednesday, several human rights groups and activists commemorate the 50th anniversary of Marcos Sr.’s declaration of martial law, which was marred with abuses, massive plunder, and cronyism.

The mid-1980s saw the emergence of a wave of protests, and by 1986, the Marcoses had been driven from power in a bloodless revolution that saw them flee to Hawaii in the United States.

As time went on, the Marcos family members began to settle back in the Philippines, reclaiming their former prominence in government. They would also say that the period of martial law was the best time in the country’s history.

President Marcos Jr. recently maintained that martial law was warranted in 1972 to quell insurrections in the Philippines, staged by communist rebels and Moro militants.

However, activists rebutted Marcos Jr.’s claims that martial law was needed by the country, claiming that the late strongman was just power-hungry.

Several activities are lined up for Wednesday commemorating the martial law era. Groups are also expected to stage demonstrations, moving from several key areas like Plaza Miranda, Commission on Human Rights grounds, and inside the University of the Philippines – Diliman.

Read Next
Flights out of Russia sell out after Putin orders partial call-up
EDITORS' PICK
House energy committee chair Arroyo bats for cheap electricity
Sierra Madre stands up to Karding, but needs protection vs the humans it saves
UNFPA Philippines Career Opportunities
Karding damage to infrastructure at P23M
Reignite your passion with the vivo Y35
Bongbong Marcos says PH ‘open for business’ with new Clark Airport terminal
MOST READ
Angelica Panganiban ‘duguan, sugatang mom’ one week into breastfeeding
Badoy not with Office of the President, NTF-Elcac, under Marcos admin — solon
LPA enters PAR, may develop into tropical depression
Kris Aquino offers help for Lolit Solis’ dialysis needs amid her own illnesses
Don't miss out on the latest news and information.