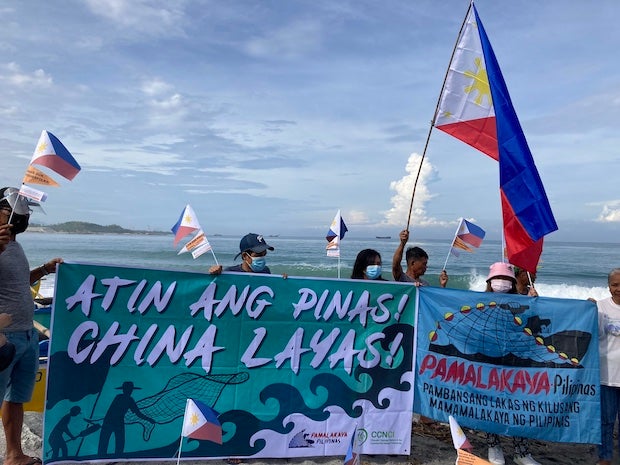 FILE PHOTO: Members of Pamalakaya stage a seaside protest in Zambales on June 12, 2021, against Chinese incursions in the West Philippine Sea. (File photo from the Twitter account of Pamalakaya)

MANILA, Philippines  — A fisherfolk organization on Monday urged President Ferdinand Marcos Jr., who is in New York City for the 77th United Nations General Assembly (UNGA), to “diplomatically reassert” before world leaders the country’s “sovereign and territorial rights” over the West Philippine Sea.

“Since Marcos would be in the same room with a Chinese official, he must diplomatically reassert our sovereign and territorial rights. Furthermore, he must remind the Chinese representative to obey the international arbitration and ultimately cease their military buildup and reclamation activities in our waters,” Pamalakaya national chair Fernando Hicap said in a statement.

Marcos, scheduled to speak before the UNGA this week, earlier vowed to bring up economic recovery, food security, and agricultural productivity before the international conference.

But Hicap challenged Marcos to also “raise the troubles we are facing in utilizing our marine and fishery resources in the Chinese-occupied West Philippine Sea” during the UNGA.

The fisherfolk group reiterated that Marcos should not “miss this very opportunity” when highlighting the subject of Chinese incursions within the Philippine territories during the high-level world leaders’ meet.

“Marcos should not miss this very opportunity to seek international support in recovering our territorial waters and as part of his commitment to boost agricultural productivity and achieve local food security,” Hicap said.

According to data from Pamalakaya, fisherfolk in Zambales province have lost 70 percent of their daily income since China occupied Panatag Shoal in 2012.

President Marcos arrives in US for six-day working visit