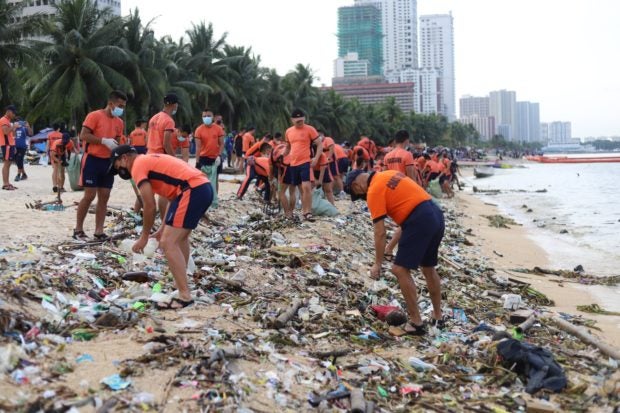 The Philippine Coast Guard participated in the cleanup drive on the coast of Manila Bay. (Photo from the PCG)

MANILA, Philippines — In celebration of International Coastal Clean-Up Day on Saturday, the government took part in a cleanup drive right on the coast where it stirred up controversy over its expensive beautification of Manila Bay.

Around 5,000 volunteers took part in the cleanup effort led by the Department of Environment and Natural Resources (DENR), the Climate Change Commission, and other agencies, according to Environment Undersecretary Jonas Leones.

Members of the Philippine Coast Guard roamed the bay, collecting trash from its waters, while Manila Mayor Sheila “Honey” Lacuna, joined by members of the Manila police and other volunteers, concentrated their efforts at Baseco Beach at Manila’s port area.

Environmental groups were already at the historic bay ahead of International Coastal Clean-Up Day, which was first observed in the American state of Washington in 1986.

On Friday, 20 people from the Earth Island Institute undertook cleanup efforts at the Las Piñas-Parañaque Critical Habitat Ecotourism Area — a part of the 1,994-square-kilometer bay which the group said has become a habitat for marine animals and migratory birds from other parts of Asia.

Earth Island Institute said it was able to collect more than 20 sacks of plastic waste. The group attributed the proliferation of plastic waste to the increased use of plastics in the delivery of goods, as people were restricted in their mobility because of the COVID-19 pandemic. It also noted that many used face masks and test kits were collected, saying the “amount of medical waste that is not properly collected is concerning.”

But no other area at Manila Bay highlighted the importance of the environmental activity being celebrated on Saturday better than Dolomite Beach — which critics saw as an unnecessarily costly project on the watch of the DENR at that.

The agency on Saturday posted a “public advisory” on its Facebook page inviting the public to take part in the cleanup.

Leones said when reached for comment that this “aims to help clean our seas and oceans through volunteerism and emphasize their life-giving importance to humans.”

“You spent millions for the dolomite, then it would be the Filipino people who ended up cleaning,” said one commenter.

Jon Bonifacio, national coordinator of Kalikasan People’s Network for the Environment, said it was important to clean up trash washed up on shores.

But “cleanup drives like this risk just being photo opportunities for our public officials,” he said.

Von Hernandez, global coordinator of the group Break Free From Plastic, said: “We can’t be spending millions of resources yearly without effectively addressing the roots of the problem.”

“[I]t’s better investment for the government to [just] compel producers and companies to reduce and stop the production of single-use plastics and invest in proven reusable and … refill[ing] systems,” he added.

The project, which began in the pandemic year of 2020, had been touted by the previous administration of then President Rodrigo Duterte as a way to ease the mental health of Filipinos amid the pandemic lockdowns.

Then Environment Undersecretary Benny Antiporda, who now heads the National Irrigation Administration, defended the project, even saying the funds were “not enough” to improve the bay’s water.

Tip of the iceberg: Dolomite beach and flooding in Manila