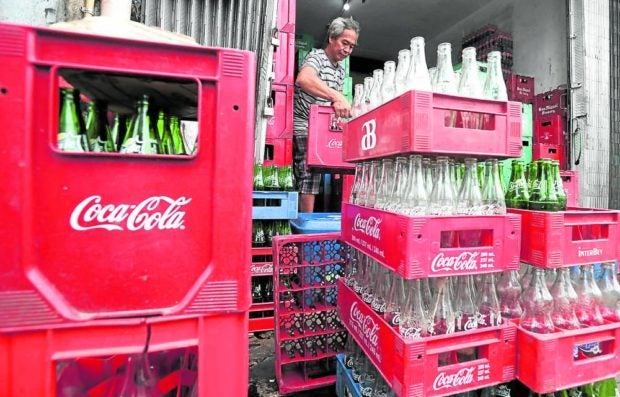 EMPTY BOTTLES | A worker arranges cases of empty bottles at a warehouse in Makati City as Coca-Cola Philippines closed its plants in Bohol and Iloilo due to a shortage of refined sugar. (Photo by MARIANNE BERMUDEZ / Philippine Daily Inquirer)

MANILA, Philippines — Popular soda drink maker Coca-Cola Beverages Philippines Inc. (CCBPI) on Friday announced it has suspended operations in Tagbilaran, Bohol, and Pavia, Iloilo, due to the shortage of bottler-grade refined sugar in the country.

“This Coca-Cola plant has suspended bottling operations due to the lack of supply of bottler grade sugar as a result of the ongoing sugar crisis,” read the company’s statement printed on tarpaulins and placed outside its premises in Tagbilaran and Pavia.

No further statement was issued by CCBPI management, but the company earlier suspended operations in Davao, Cavite, Zamboanga, and Camarines Sur due to the lack of premium refined sugar.

The company and other softdrinks makers earlier issued a joint statement confirming the sugar supply shortage in the country.

On Sept. 13, President Ferdinand Marcos Jr. approved Sugar Order (SO) No. 2, which authorizes the importation of 150,000 metric tons of refined sugar with half, or 75,000 MT, going to industrial users and the other half going to consumers. The shipment was intended for the crop year 2022 to 2023 and is expected to arrive no later than Nov. 15.

But sugar planters in Bacolod City believed it is too early to determine if the 150,000 MT to arrive in November will be enough.

Enrique Rojas, president of the National Federation of Sugarcane Planters (NFSP), said the Sugar Regulatory Administration (SRA) has yet to reveal and explain the production and projection figures that it used in arriving at the 150,000 MT importation.

Rojas said the arrival of imported sugar by mid-November, when most mills are already operating and sugar supply would have substantially stabilized, might dampen mill gate sugar prices but might not lower retail prices.

Several mills, he said, have started early milling this crop year. Taking advantage of the more than P3,000 mill gate price per 50-kilo bag of sugar, some planters rush their cane harvest, including not too mature canes, to avail of the unprecedented prices.

They also requested SRA to clarify the selling price level, which it aims to achieve with the proposed importation.

Marcos, who chairs the SRA board as concurrent agriculture secretary, signed on Aug. 26, SO No. 1 classifying all sugar produced in the country in the crop year 2022-2023 for domestic consumption.