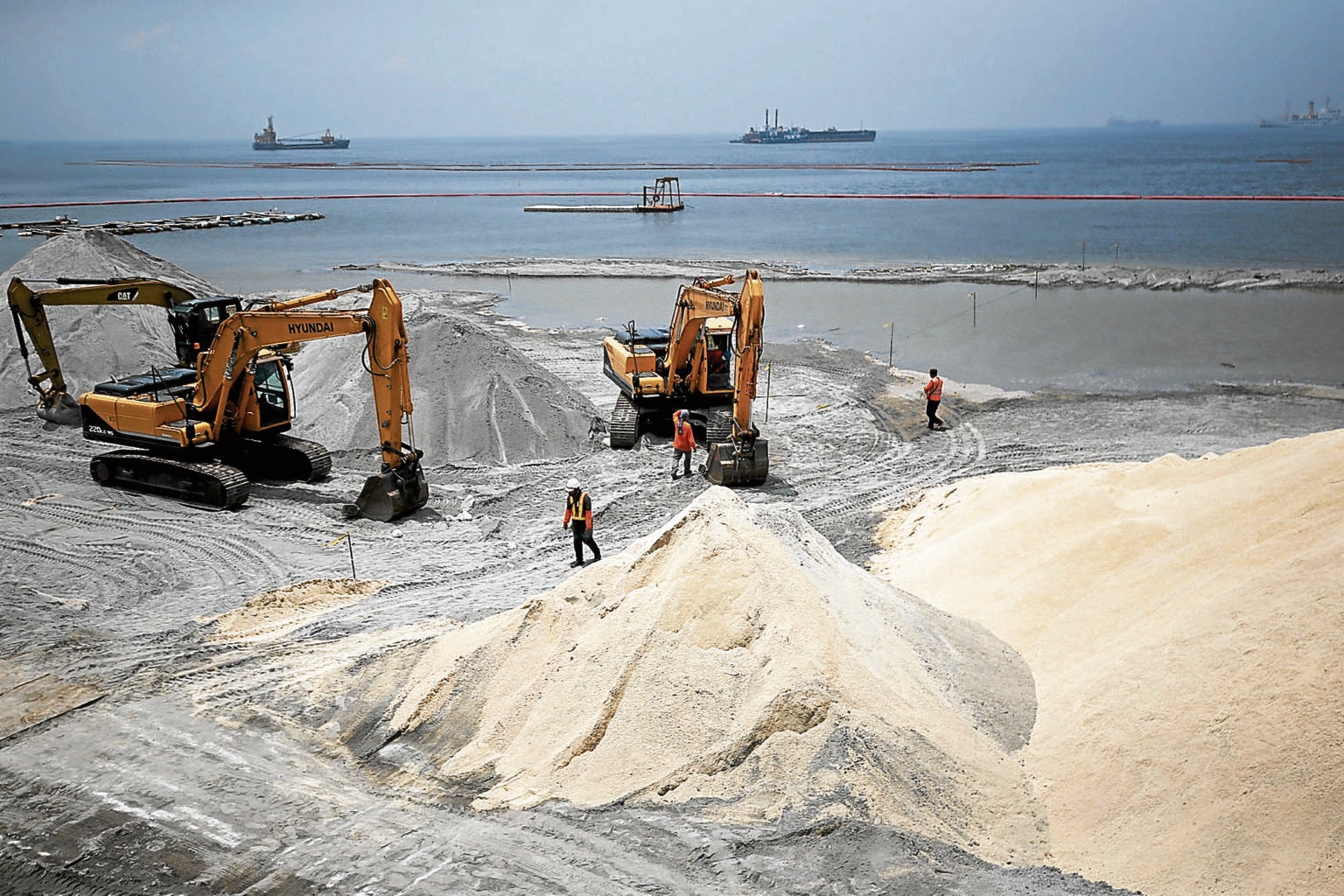 In this September 3, 2020, photo, workers prepare ground dolomite to create a white sand appearance for a portion of Manila Bay. INQUIRER FILE PHOTO/ RICHARD A. REYES

MANILA, Philippines—Following the flooding in areas in Manila earlier this month, an environmental group emphasized the dangers of dump-and-fill projects, such as what was done to put in place Dolomite Beach, which was first thought to be the reason behind the flooding.

But MMDA later clarified that the flooding—and the slow subsidence of floodwater— amid the heavy downpour was due to unfinished construction of pumping stations and pipelines near Dolomite Beach.

READ: Tip of the iceberg: Dolomite beach and flooding in Manila

The group Oceana—the largest international advocacy organization dedicated solely to ocean conservation—emphasized that Dolomite Beach would still cause flooding and other natural hazards in the long run.

Risking lives on sea and land

According to Oceana, previous studies have pointed out that dump-and-fill activities would exacerbate Manila Bay’s vulnerability to environmental hazards and extreme weather events, which are further aggravated by climate change.

Climate change, paired with the environmental threats of illegal reclamation projects, would cause:

“According to experts, Manila Bay is also not safe for reclamation and similar coastal development activities due to the existence of many natural hazards, such as land subsidence (sinking), flooding, and storm surges brought about by stronger typhoons,” said lawyer Rose-Liza Eisma-Osorio, legal and policy director of Oceana. 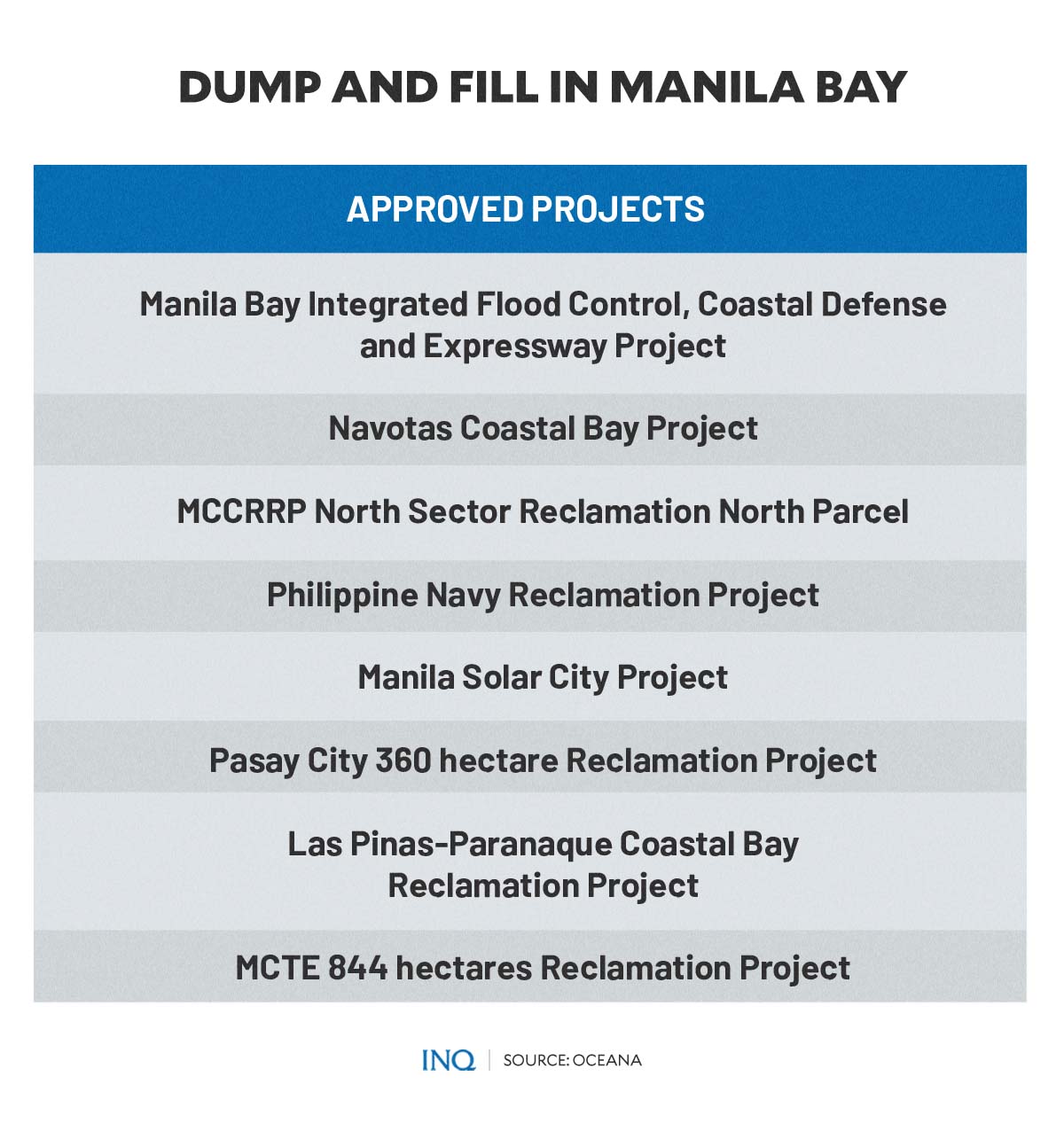 “We are now seeing this in the recent flooding in Manila even if there was no typhoon,” she explained.

“We cannot ignore the fact that reclaiming our coastlines in Manila Bay is like putting a plug on a bathtub full of water and closing the natural outflow of water towards the bay.”

The impacts of illegal dump-and-fill projects could endanger over 30 million people living in and near Manila Bay.

Moreover, the land reclamation projects could also disturb and damage the marine biodiversity of Manila Bay and its fragile ecosystem.

The bay is considered home to some fish species, including sardines, mackerel, mullet, threadfin beam, squid, blue crab, round scad, and fusilier.

“67 percent of Manila Bay’s total value is accounted for by the fisheries industry alone. Reclamation will decrease fish populations due to the loss of breeding grounds,” Oceana said.

“60 percent of all waterbird species in the Philippines, including 12 globally threatened species are at risk because they occur within proposed reclamation areas in Manila Bay,” the organization said.

Studies have also found that illegal dump-and-fill projects could lead to further decimation of wetland areas and mangrove forest areas in the Manila Bay area.

Separate studies published in 2001, 2014, and 2018 found that the sea level in Manila Bay is rising at 13.24 mm per year, and it is sinking by a rate of 10 cm annually as a result of the over-extraction of groundwater.

Based on Greenpeace East Asia’s report on Asia’s sinking cities, at least 87 percent or 37.29 square kilometers of Manila City’s land would feel the impact of the 10-year flood in 2030. 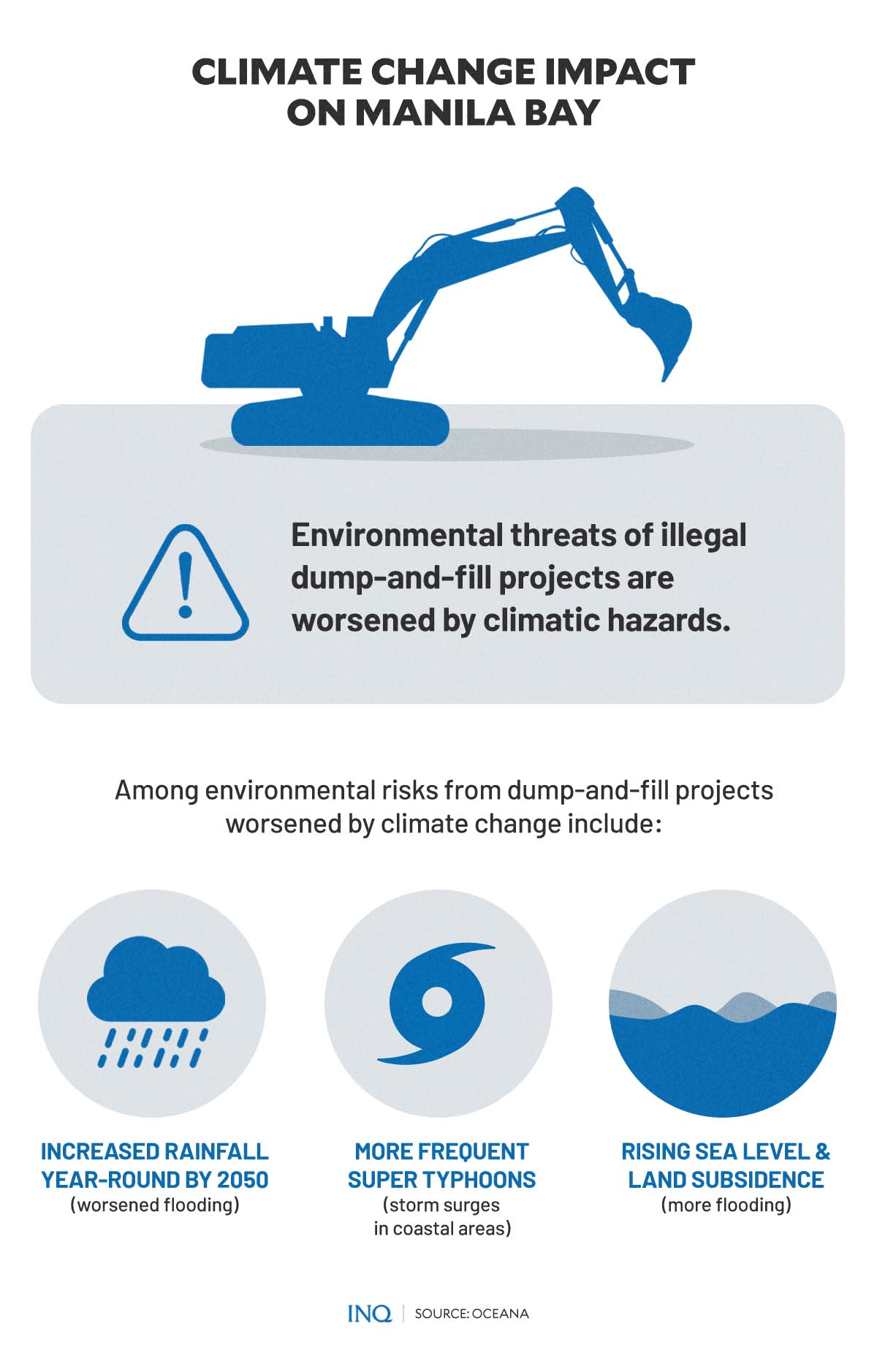 More than 1.54 million Manila residents could be displaced, and a $39.24 in the city’s GDP could be lost.

The disastrous 10-year flood could inundate and damage historical landmarks and popular tourist destinations in the city, including the Jose Rizal National Monument, Luneta Park, Binondo, and the “walled city” of Intramuros.

READ: Climate crisis to turn Manila, other Asian cities into bodies of water

Last March, Oceana lauded the Department of the Interior and Local Government (DILG) for issuing a strong policy action to deter dump-and-fill projects that violate the right of the people to a healthful and balanced ecology by reminding local authorities to prioritize ecological protection.

“These should be in accord with the local development plans, coastal resource management plan, land use plan, climate change action plan, among others, which local government are tasked to perform,” said Oceana vice president Gloria Estenzo Ramos.

That same month, as part of its ongoing campaign against dump-and-fill projects, Oceana unveiled the Citizen Scorecard, which would strengthen the policy issuance by the DILG and provide a guiding tool for citizens in environmental impact assessment and legal safeguards.

According to the organization, the scorecard was developed to inform and empower communities to ensure that environmental safeguards are in place for proposed dump-and-fill (reclamation) projects in coastal zones.

It is a tool that would guide citizens and stakeholder communities on the processes and requirements to be followed when there are proposed projects that impact the right to health and a healthy, safe and sustainable environment. 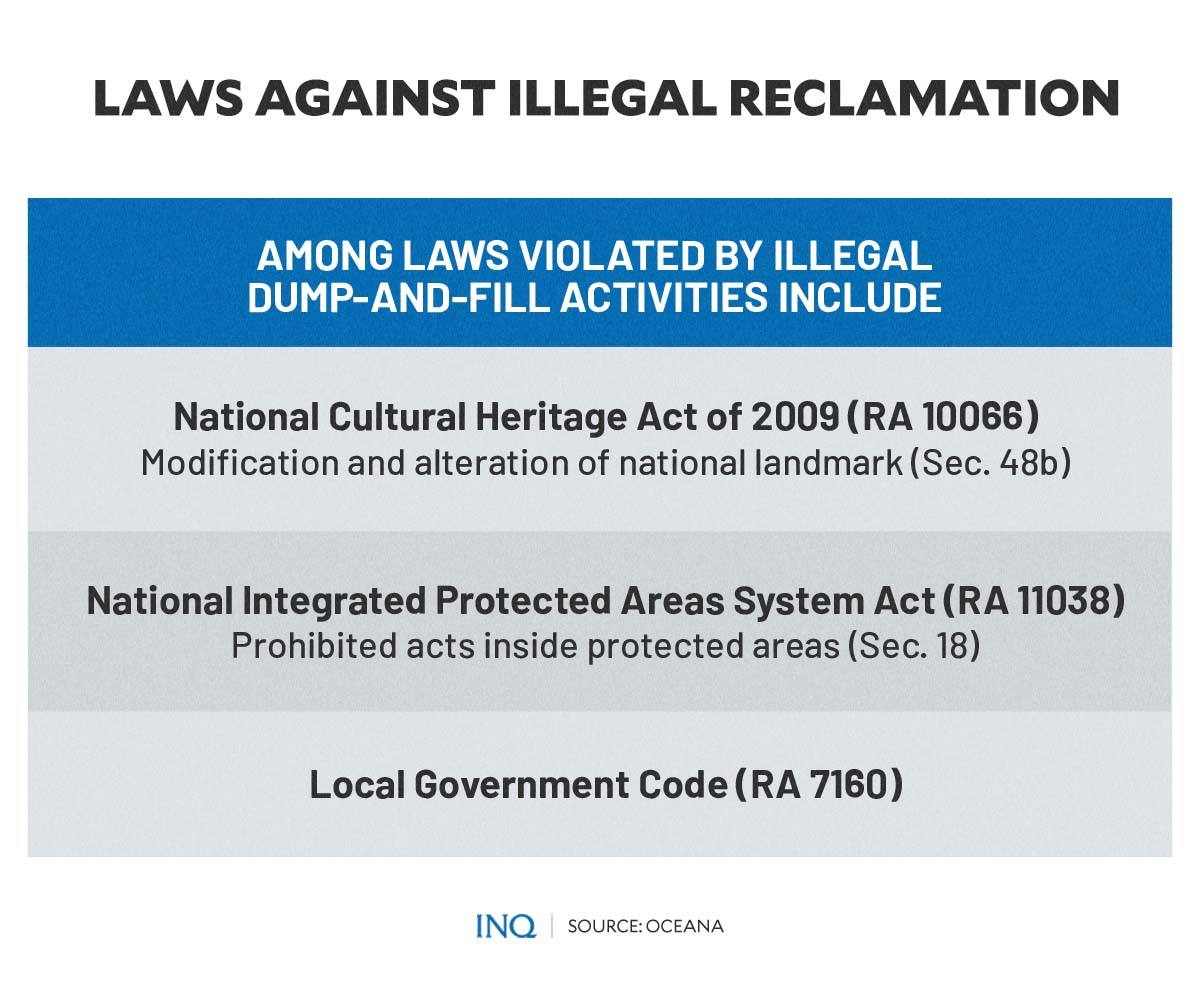 The scorecard will enable citizens and stakeholder communities to check if all the required steps are fulfilled in processing the proposals for dump-and-fill and other similar projects. Among the questions included in the scorecard are whether genuine public consultations and public hearings were conducted on the Environmental Impact Study (EIS) of the project.

The DILG also launched Memorandum Circular 2022-018, which reiterates the responsibility of all LGUs over projects covered by the Philippine Environmental Impact Assessment Statement System (PEISS) and provides the necessary guidelines.

Under the PEISS Act and several environmental laws, proposed projects such as dump-and-fill have to be thoroughly assessed for their environmental, climate, cultural, social and health impacts. Violators of the various laws face administrative, civil, or criminal liability.

“The scorecard will enable constituents to assess compliance with the existing environmental, fisheries, and other related laws in processing application and approval of reclamation projects,” said Ramos.

“Citizens have the most to lose if destructive dump-and-fill projects and other unwarranted development of coastlines continue to persist,” she added.

“The proponents of these projects, including local governments, must not be allowed to circumvent relevant rules and regulations, and cause us to be more vulnerable to the continuing loss and damages on our coasts and oceans amid the declining state of fisheries, biodiversity degradation, and climate vulnerability.”

The Citizen Scorecard can be accessed through this link:https://ph.oceana.org/wp-content/uploads/sites/16/Citizen-Scorecard_3.30.2022.pdf

Oceana said large-scale reclamation projects that lead to the dumping and filling of the seas are illegal since these projects violate the people’s Constitutional right to a balanced and healthful ecology.

“The dump-and-fill projects hiding behind the promise of reclamation are in pursuit of economic and infrastructure facelift at the expense of the environment and the safety and livelihood of the people,” the organization said.

“Creating land where there was once only water brings irreversible destruction to marine habitats and make us vulnerable to disasters,” it added.

Aside from the Citizen Scorecard, people can support the organization’s call to save Manila Bay and stop the dumping and filling of the country’s seas by signing this online petition at tinyurl.com/savemanilabay.