Climate crisis to turn Manila, other Asian cities into bodies of water 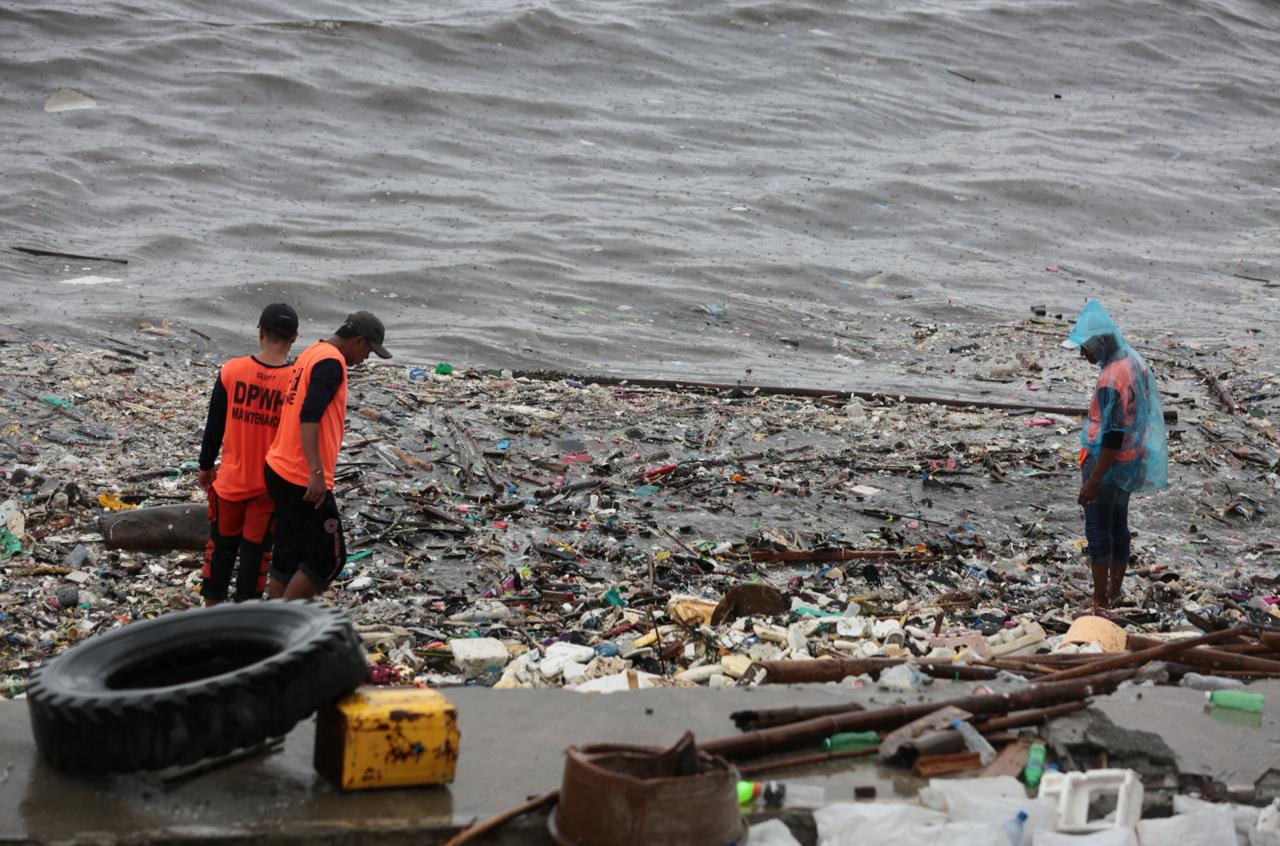 It’s 2030 and Manila, densely populated and packed with residences and structures, has become a lake.

This, according to a study of environmental group Greenpeace East Asia, was highly likely to happen in 2030 as sea levels rise at unprecedented rates.

Continuing and extreme sea level rise in the past decades, due to climate change, is fueling stronger tropical cyclones that could soon sink major Asian cities, including Manila, and displace millions of people and destroy economies worth billions of dollars.

Greenpeace East Asia, in a report released this month, said studies found that seven coastal cities across Asia are at heightened flood risks due to sea-level rise and intense tropical storms which could bring more damaging wind speeds, higher storm surges, and increased extreme rainfall in the following years. 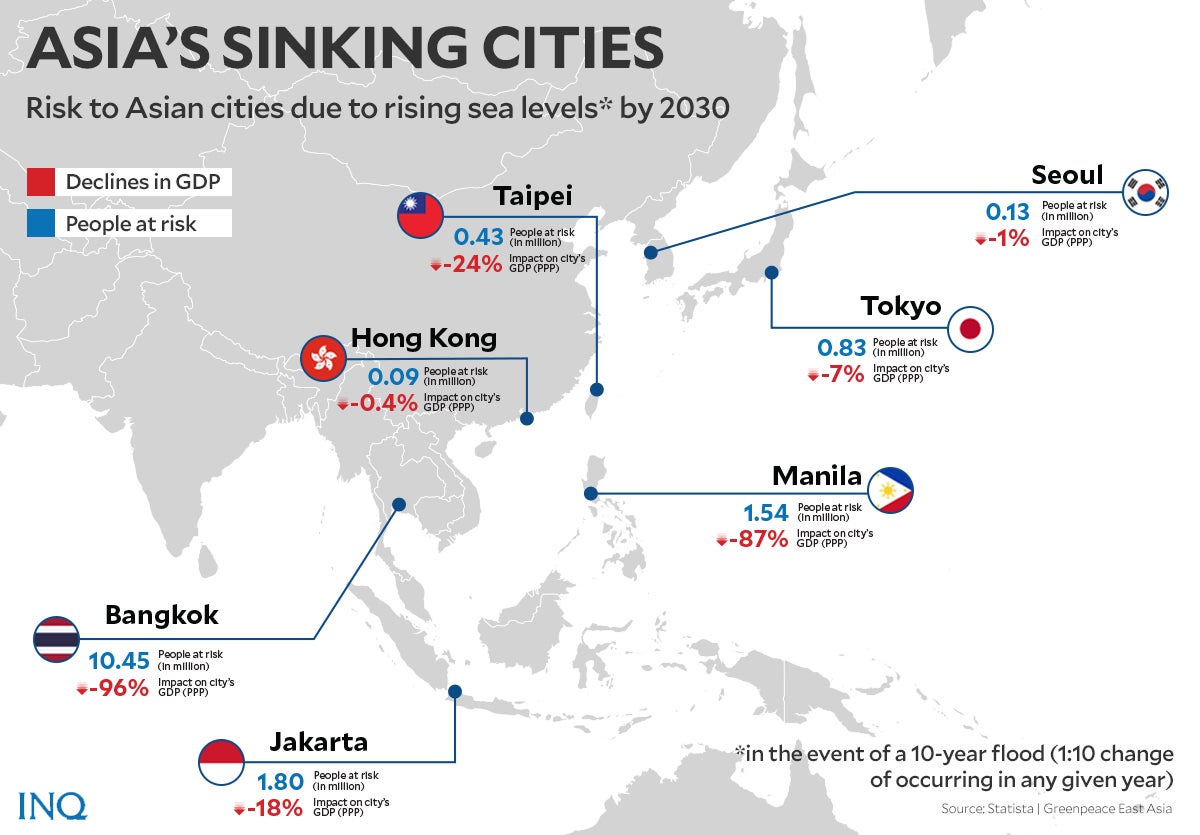 According to the report, among Asian cities at risk of turning into water worlds because of extreme weather changes in 2030 were:

Greenpeace analyzed how the climate crisis can affect the economies of the seven cities based on three datasets:

Results showed that the overall monetary damages and GDP impact of extreme sea-level rise and coastal flooding by 2030 would amount to $724 billion. The estimated GDP impact ranged from 0.4 percent to 96 percent of each city’s economy.

At least 15 million individuals and 1,829 square kilometers of land would bear the severe impact of the climate crisis.

Manila, the capital city of the Philippines and home to over a million Filipinos, was flagged as the third most exposed economically among the seven cities. 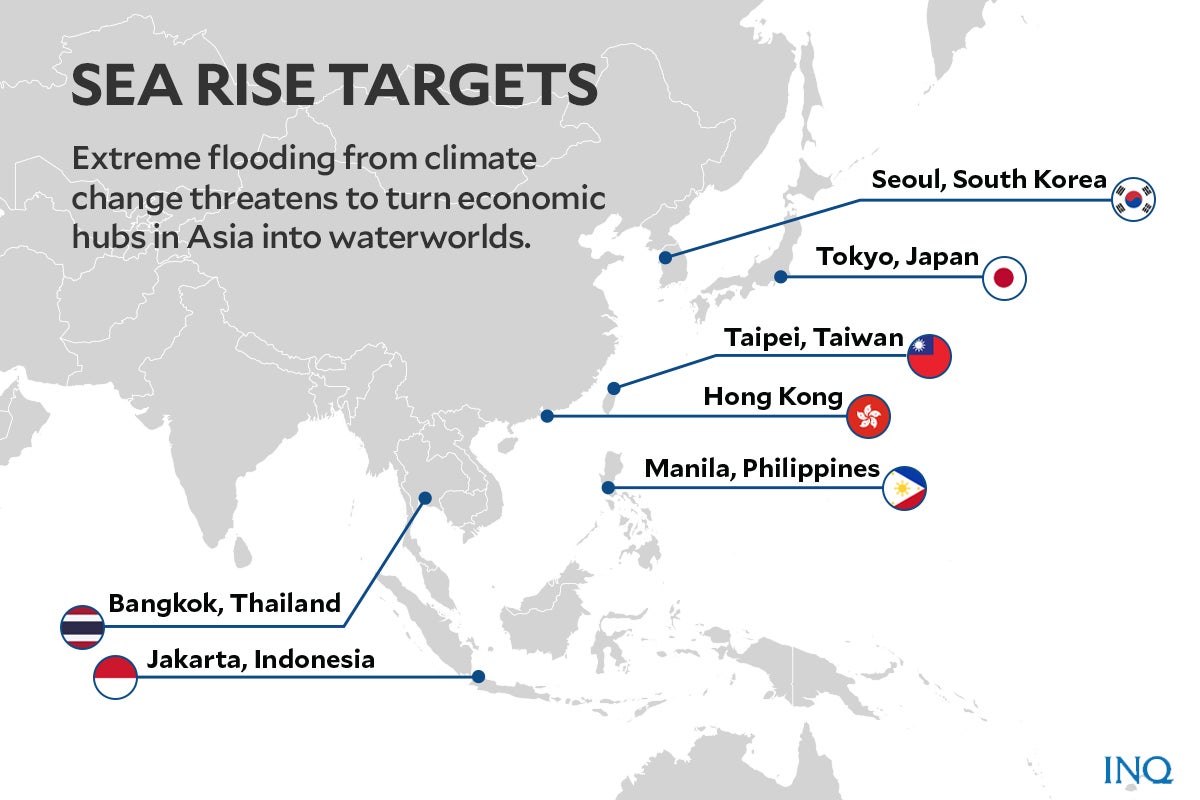 According to the study, at least 87 percent or 37.29 square kilometers of the city’s land would feel the impact of the 10-year flood in 2030. More than 1.54 million Manila residents could be displaced and lead to a $39.24 billion decline in the city’s GDP.

A separate study found that the sea level in Manila Bay rises by 13.24 mm per year. Data from another report said Metro Manila sinks by a rate of 10 cm annually due to the over-extraction of groundwater within the region.

The disastrous 10-year flood could inundate and damage the historical landmarks and popular tourist destinations in the city, including the Jose Rizal National Monument, Luneta Park, Binondo and the “walled city” of Intramuros. 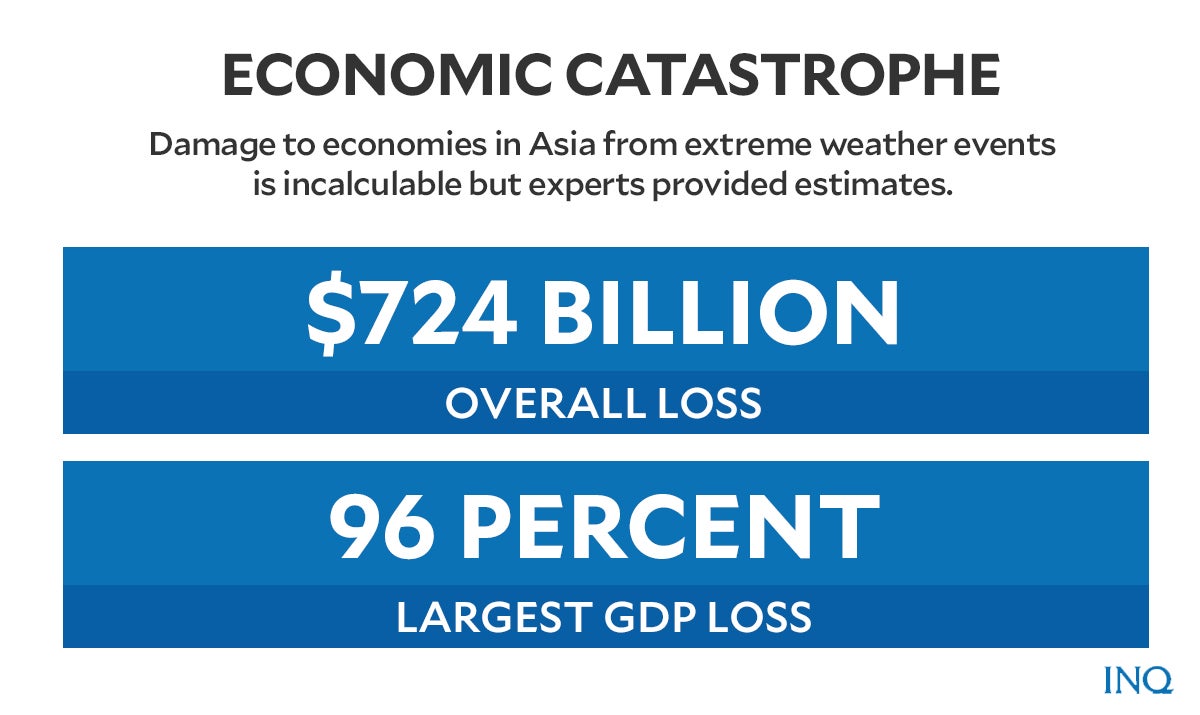 Experts from Greenpeace East Asia said the city of Bangkok  could suffer the greatest damage and losses among the seven cities.

Over 96 percent, or 1,512.94 square kilometers, of Bangkok’s land area could be overcome by seawater following the 10-year flood.

The study added that Sappaya-Sapasathan, the third and current parliament house of Thailand, could be among the major infrastructures swallowed by floodwater.

A total of 10.45 million individuals in Bangkok could suffer from the projected sea-level rise and coastal flooding.

Greenpeace East Asia also explained that the city’s vulnerability to flooding, which is “exacerbated by the fact that the city is sinking due to soft soils, heavy urbanization, and land subsidence”, is also a factor that could worsen the impact of the climate crisis.

Jakarta in Indonesia ranked as second most affected city. Around 109.38 km2 or 17 percent of its total land area might be under water.

Some areas in the city identified by Greenpeace East Asia which could potentially be hit by the flooding were residential and commercial buildings, several shopping malls along the coast, and the National Monument and Jakarta City Hall.

At least 1.80 million people could be affected and the city could lose 18 percent of its total GDP equivalent to $68.20 billion.

“In addition, excessive groundwater drainage is contributing to Jakarta’s subsidence, which is on average 1 to 15 centimeters each year,” said Greenpeace East Asia, adding that a number of areas in Jakarta “have sunk between 3 to 4.1 meters, especially in coastal areas.”

Tokyo, according to the report, experiences at least 11 typhoons and an increasing frequency and intensity of storms and torrential rain every year.

Experts have also noted that storm surge flooding may become even more severe in the coming years due to rising sea levels.

The geographical structure of the city also plays a huge role in the severity of the impact of the projected 10-year flood in 2030.

While the city has an average elevation of 40 meters above sea level, it has a number of low-lying areas with a high population density that is still at risk of flooding.

“About 4 percent of Tokyo’s land area is below the level to which seawater could rise should a 10-year flood occur in 2030, according to our analysis using projections,”  the report read.

Included in these areas at risk of flooding are the “Koto 5 Wards” in the Eastern part of Tokyo which is comprised of Sumida, Koto, Adachi, Katsushika, and Edogawa.

“Other areas that are at risk of flooding include Kasai Rinkai Park, which is built on reclaimed land on the shoreline of Tokyo Bay, and river parks along the Arakawa River, which are popular destinations to watch the cherry trees bloom in spring,” the organization said.

At least seven percent or $68.19 billion of Tokyo’s GDP could be wiped out.

On the other hand, Taipei—which experiences four typhoon landfall each year according to data from the Central Weather Bureau (CWB) in Taiwan—could lose 17 percent, or 46.93 km2, of its total land area.

“The western part of Taipei, particularly areas along the Tamsui River, would be affected more than other regions of the city if sea levels were to rise,”  the report noted.

The historic Datong District and Taipei Main Station could potentially be flooded.

South Korea, which has been hit by three strong typhoons in 2020, could also incur damages from the 10-year flood.

An estimated 3 percent of Seoul’s land area could go below sea level.

The capital city could suffer damages worth $4.69 billion, or one percent of its total GDP. At least 130,000 million people are in danger.

The western part of Seoul, particularly Gangseo-gu on the Southern bank of the Han River, as well as both banks of the Anyangcheon River, could be at high risk as the sea level rise.

The Gimpo International Airport and the Gangseo Marsh Ecological Park could be under water.

The least affected city on the list will be Hong Kong. Results showed that around 27.36 km2, two percent of its total land area, could be under water.

A total of $2.24 billion in losses was estimated and up to 90,000 people in Hong Kong could potentially be affected.

“Northwest Hong Kong, including Mai Po Nature Reserve, where a large portion of land is mangrove and wetland, is at very low elevation and is vulnerable to sea-level rise,” said experts from Green Peace East Asia.

Based on a 2015 study, over the twentieth century, the global mean sea level (GMSL) rose by an estimated rate of 1.6 to 1.9 millimeters per year.

A huge factor was anthropogenic, or human-induced, climate change.

According to the report, at least 200 million people globally will live below sea level by 2100. Around 160 million more will suffer from higher annual flooding due to rising ocean levels.

“These numbers are much higher than those published in previous studies, which used different coastal elevation models and assumed that only 250 million people in total would be affected by these adverse events,” said Buchholz.

Majority of the total affected population will be coming from eight countries in Asia including China, Bangladesh, India, Vietnam, Indonesia, Thailand, the Philippines, and Japan.

The net-zero emissions in 2050 project by the International Energy Agency (IAE) aims to lower energy-related carbon dioxide (CO2) emissions to net-zero by 2050 and “give the world an even chance of limiting the global temperature rise to 1.5 °C,” according to the Greenpeace East Asia. 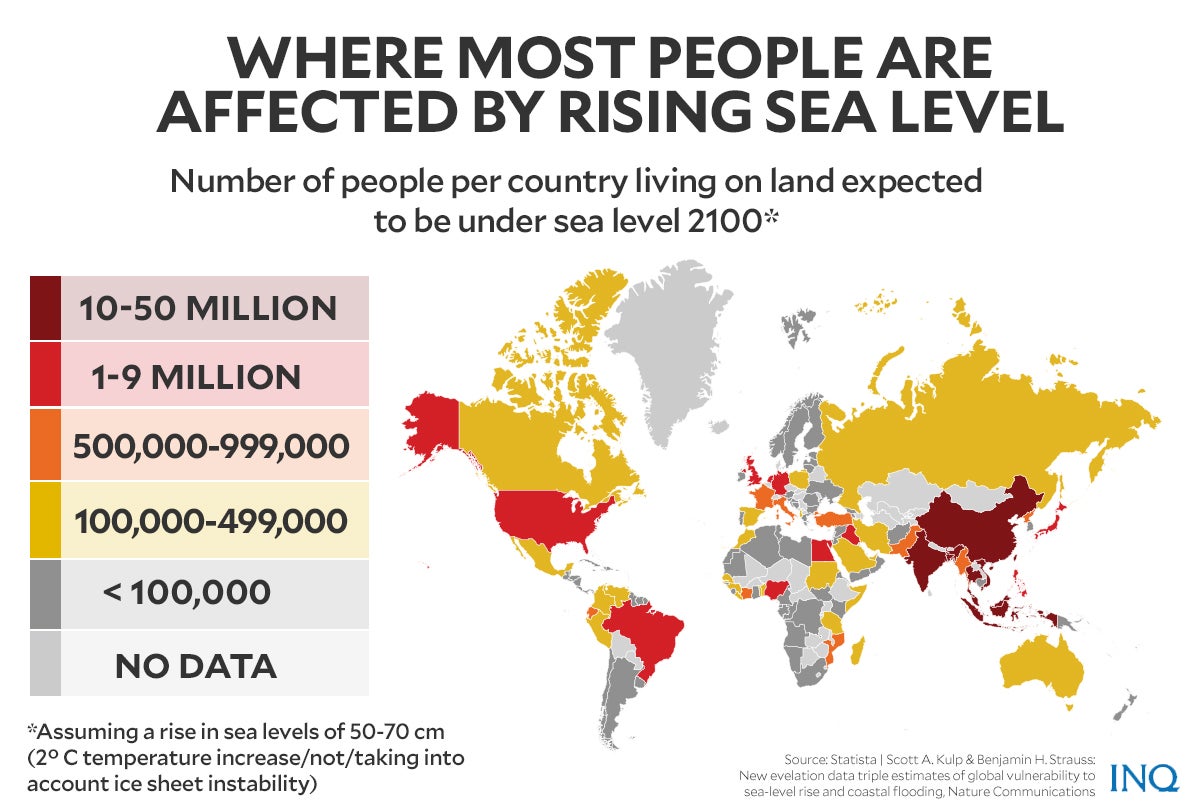 “Our roadmap shows the priority actions that are needed today to ensure the opportunity of net-zero emissions by 2050—narrow but still achievable—is not lost,” said the organization.

“The scale and speed of the efforts demanded by this critical and formidable goal—our best chance of tackling climate change and limiting global warming to 1.5 °C—make this perhaps the greatest challenge humankind has ever faced,” said IEA Executive Director Fatih Birol in a statement.

Green Peace East Asia also asked government leaders of Asian countries to take responsibility and cooperate with the IAE’s initiative to protect the economy, conserve biodiversity and ensure the safety of lives and livelihood of their populations.

“We ask governments to deliver implementation plans with firm and achievable solutions, such as phasing out domestic use and financing of the fossil fuel industry and switching to an economy that is based on renewable energy,” the organization said.