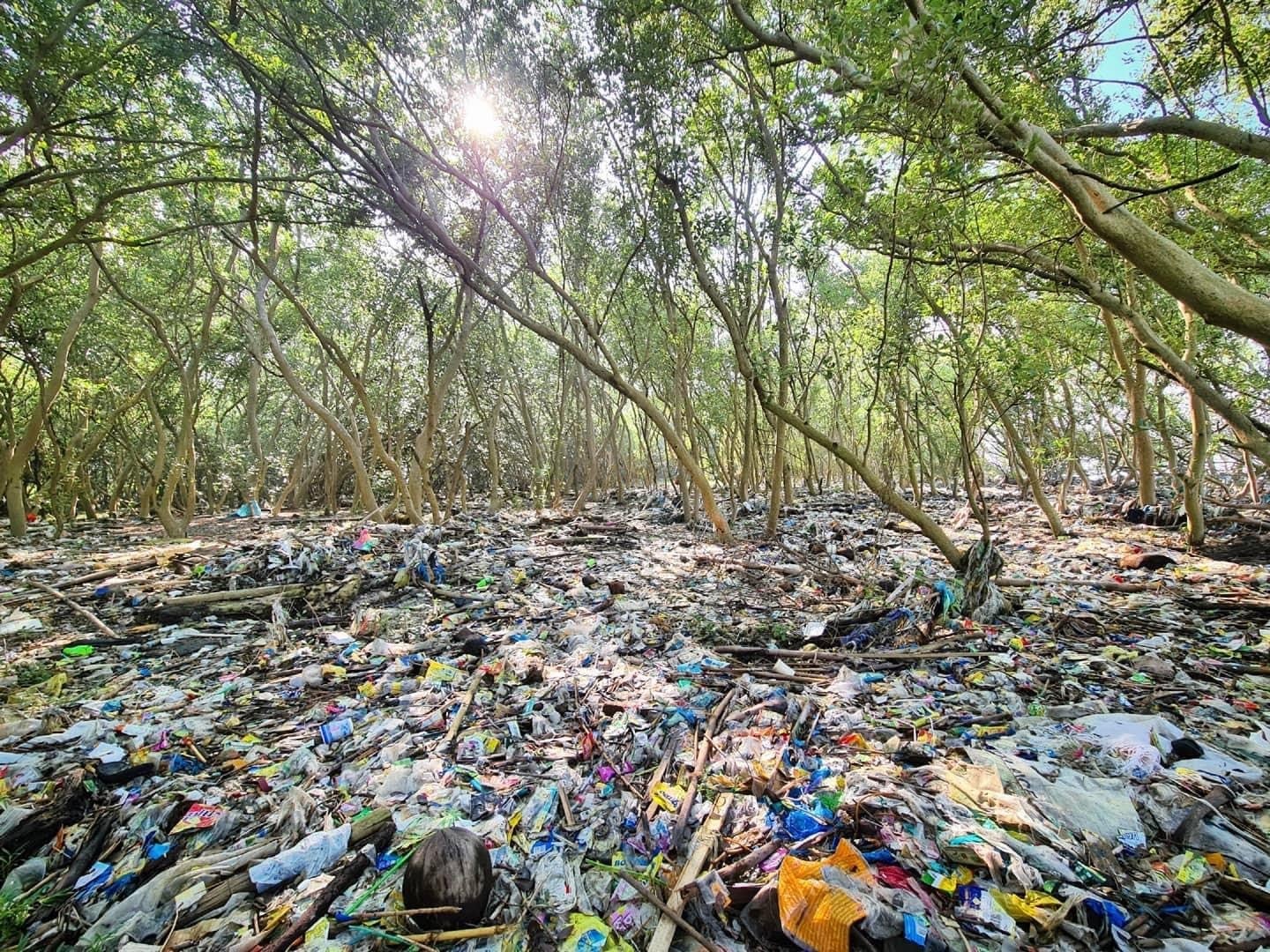 PILES OF WASTE. The wetlands of Manila Bay in Navotas City are now threatened by pollution, mostly because of plastics. Photo courtesy of Diuvs de Jesus/Oceana Philippines

MANILA, Philippines—The dolomite beach on Manila Bay sought to portray a successful cleanup campaign but on the bay’s periphery lay the real problem—ecological damage that hundreds of millions of pesos worth of artificial white sand is not addressing but, some critics said, was simply whitewashing.

On Sunday (Oct. 17), the Department of Environment and Natural Resources (DENR) boasted of its “newest attraction”—a portion of Manila Bay’s shore covered with layers of ground dolomite rocks that appear to be white sand. 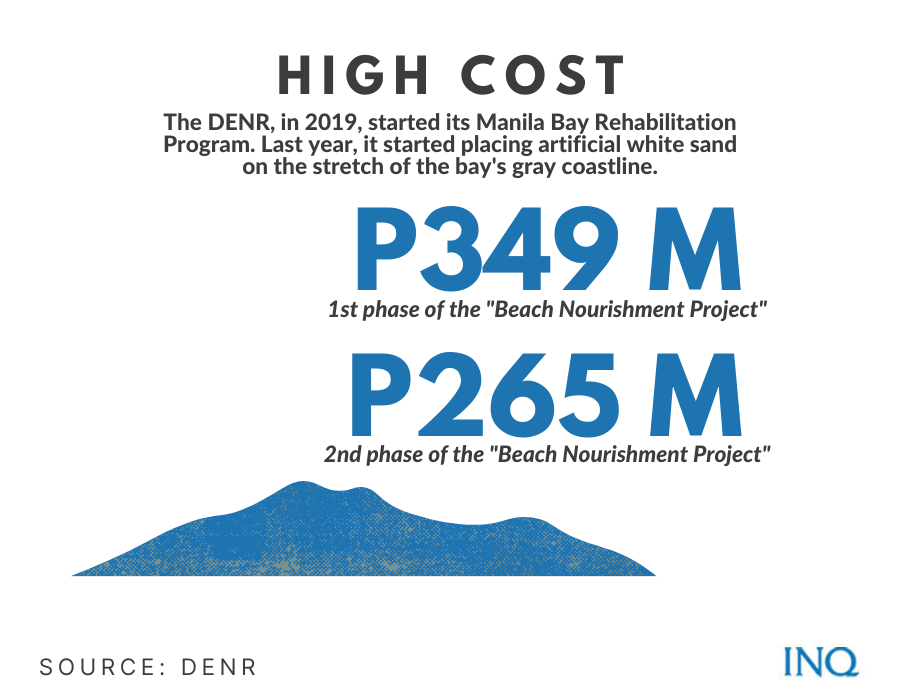 Last August, President Rodrigo Duterte defended the dolomite project, saying the beach became “beautiful to the eyes.” But kilometers away, in Navotas City, there’s a part of Manila Bay that is threatened by piles of garbage that literally “choked” an environment essential to marine life.

Diuvs de Jesus, Oceana Philippines’ marine scientist who visited the Manila Bay wetlands last Sept. 25, said he was dismayed when he saw the state of mangroves while the government dedicated hundreds of millions of pesos to the dolomite beach.

“Spending millions for the dolomite beach in the disguise of ‘cleanup’ when other parts of Manila Bay’s mangroves and mudflats are threatened by plastic pollution and reclamation?” he said. 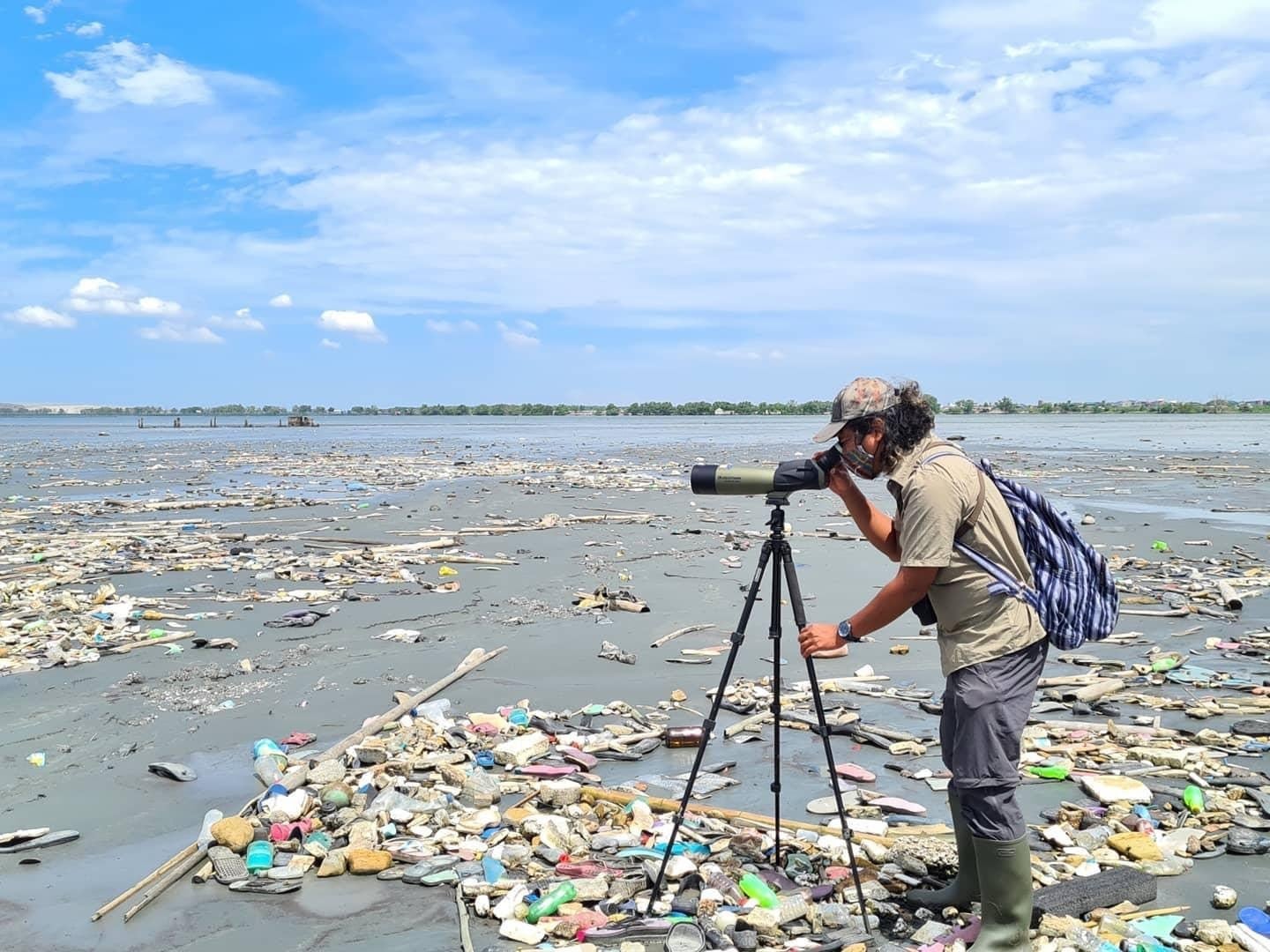 Garbage litters part of Manila Bay some distance away from the dolomite beach. Photo courtesy of Diuvs de Jesus/Oceana Philippines

“We could have used it for other meaningful and useful projects to address the problem regarding plastic waste,” he told INQUIRER.net, saying that the dolomite beach only hides the severity of the problem.

The DENR said the beach, which cost P349 million, was the first phase of its “beach nourishment” project. Last May, the agency said P265 million was again spent to have the artificial beach’s second phase completed.

In 2020, Environment Undersecretary Benny Antiporda said the program was expected to cover 30,000 square meters of Manila Bay, with a length of 500 meters and a width of 60 meters, specifically the coastline along Roxas Boulevard.

De Jesus, however, said Manila Bay is a vast body of water which is bordered by the cities of Manila, Pasay, Parañaque, Las Piñas and Navotas and the provinces of Bataan, Pampanga, Bulacan and Cavite.

The dolomite beach is in the jurisdiction of Manila. But what about the other places? “I hope they will protect the marine environment there,” said De Jesus. 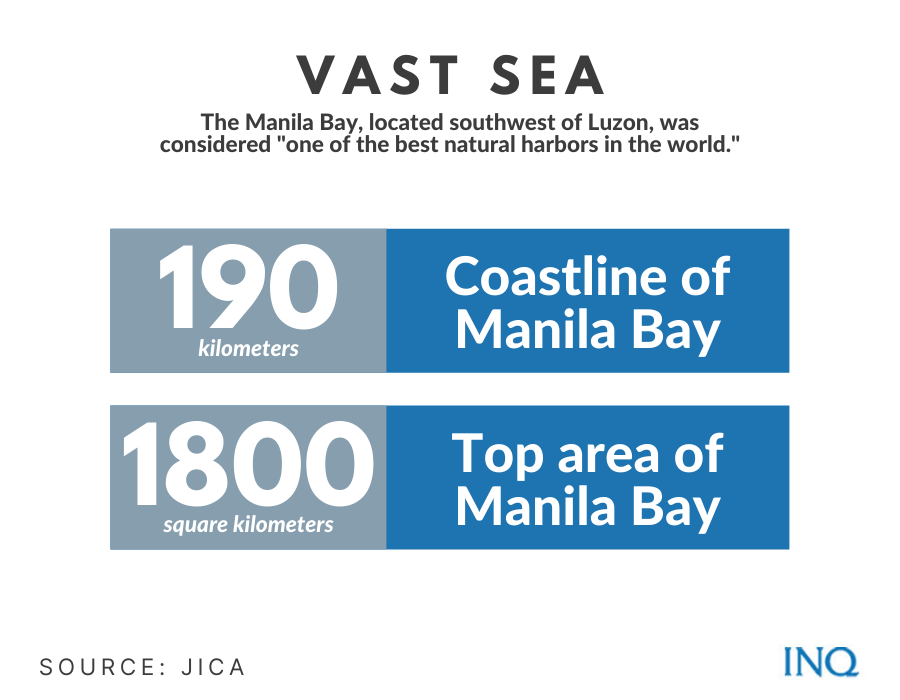 The Japan International Coordinating Agency (JICA) said Manila Bay, located southwest of Luzon, has a coastline of 190 kilometers and an estimated top area of 1,800 square kilometers. It also features a “gently sloping basin.”

Mae Chatto, Oceana Philippines’ campaign specialist, said the DENR was not keen on rehabilitating Manila Bay because the creation of a dolomite beach does not address the real problem, especially plastic pollution. 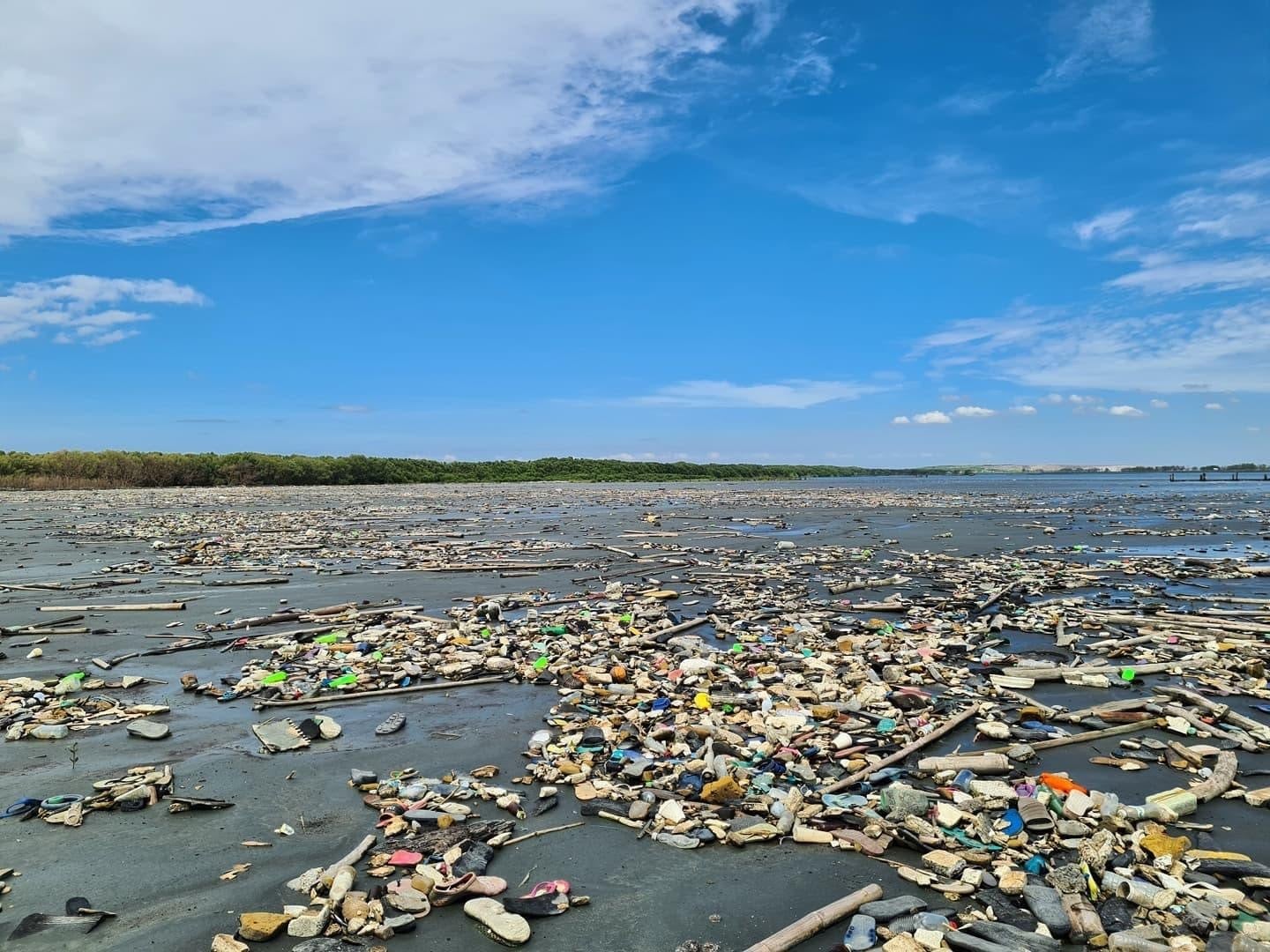 A problem that dolomite can’t address is these piles of waste in Manila Bay. Photo courtesy of Diuvs de Jesus/Oceana Philippines 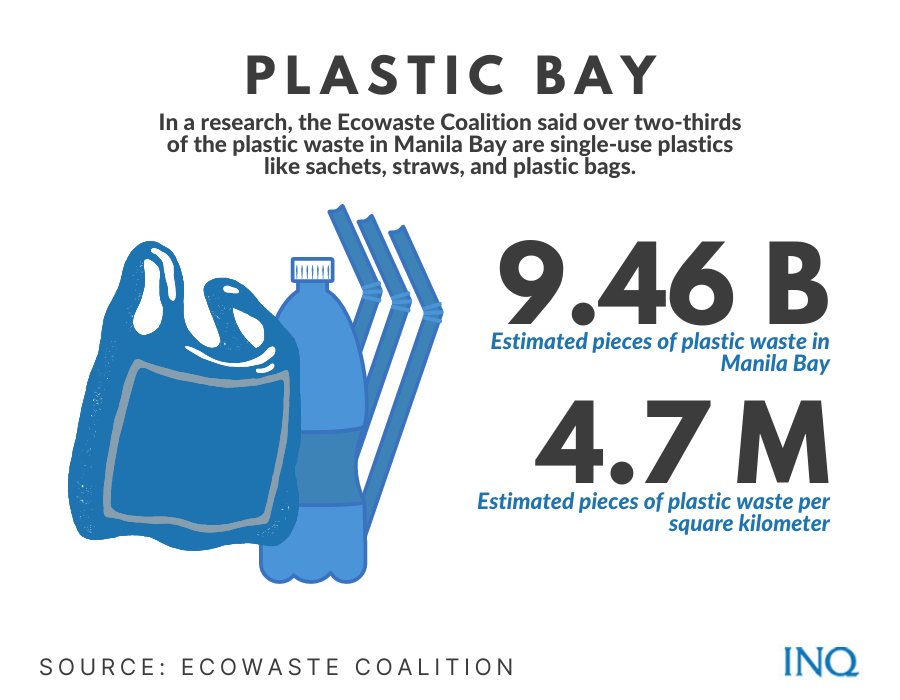 In its research, the Ecowaste Coalition explained that single-use plastics (SUP) account for over two thirds of the plastic waste in the bay—8.32 billion pieces with a total weight of 109,298 metric tons and covering a total area of 4,923 square kilometers.

“I hope that instead of bringing artificial sands, they bought equipment to improve water quality in Manila Bay and enforce the law to make it healthy and a good fishing ground,” said lawyer Gloria Ramos, Oceana Philippines’ vice president.

“We are sad that the DENR continues to flaunt it as if it is a program that Filipinos are proud of. We are not proud of it,” she said.

“They did not even comply with the Sustainable Management Plan,” she told INQUIRER.net.

In 2008 the Supreme Court ordered 13 government offices, including the DENR, to rehabilitate Manila Bay and restore its waters to levels fit for swimming and other forms of “contact recreation.”

In 2019, Environment Secretary Roy Cimatu launched a “beach nourishment” project to save the bay from waste and city blight. In 2020, the agency started placing artificial white sand from ground dolomite rocks from Cebu province.

But Ramos said the government should first solve the problem of plastic waste and coliform level, explaining that if the government will perform its tasks before doing “cosmetics,” the environment will become healthier. 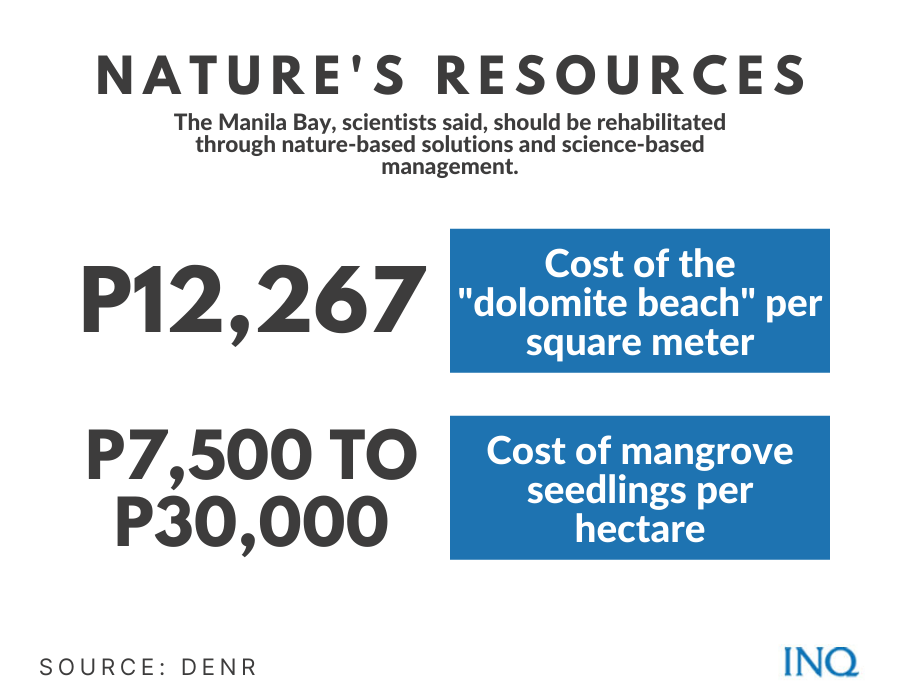 She said that because sea level rise is a reality, the dolomite beach, in 10 years, will be eaten up by the water. She said research showed Manila Bay needs “protection, conservation and rehabilitation,” not cosmetics that are “irrelevant to the lives of Filipinos.”

The United Nations Intergovernmental Panel on Climate Change had said that the average global rate of sea level rise increased from 1.9 millimeters per year between 1971 and 2006, to 3.7 millimeters between 2006 and 2018.

Research work by Greenpeace East Asia said 87 percent, or 37.29 square kilometers, of Manila’s land would be under water as a result of the 10-year flood that was projected to occur in 2030. At least 1.54 million residents would be displaced, their homes and communities rendered uninhabitable.

“There are several problems in the Manila Bay that need to be addressed. Aside from the dolomite beach being a cosmetic solution, it’s not really addressing the problems of Manila Bay,” said De Jesus.

“With the problems arising, you will not be able to solve a problem by creating another problem. They should go down to the core and not cover it,” said Chatto.

“Cosmetic solution is not a long term solution. The dolomite beach is not the solution,” Chatto said.

She said that if the “problems that we have now will not be solved and if we will continue destroying the environment for the sake of beautification, we will all suffer, including the generations to come.”

The National Center for Biotechnology Information said the Philippines has an estimated 256,185 hectares of mangroves which are capable of “thriving in a wide range of harsh environmental conditions.”

READ: Mangroves can serve as protective wall, even against a storm like Yolanda

In Navotas City and Bulacan province, De Jesus said the marine environment, including mangroves, serves as breeding ground for several organisms, including sardines. “It provides an ecosystem and livelihood for the people,” he said.

This, he said, is the reason the government should instead exert efforts to protect the environment instead of reclaiming the sea to create a beach with artificial white sand which could also destroy the environment.

Ramos said that instead of being covered with an artificial beach, Manila Bay should be rehabilitated through “nature-based solutions,” explaining that there should be science-based management. “It’s time. I hope the perception of our leaders will change,” she said.

“If we assist the environment in its healing and we place the right species, the environment will recover quickly. I’ve seen that. I hope we will have leaders who will bring in people while planning,” she said.

She cited the story of Roberto Ballon, the 2021 Ramon Magsaysay Awardee who initiated a mangrove-planting project. “Nature has provided us with everything. The solution was provided by nature,” she said.

In 2020, Antiporda said each square meter of the dolomite beach cost P12,267. A mangrove seedling, however, only costs P7,500 (propagule) to P30,000 (potted) per hectare, the DENR said in its National Greening Program.