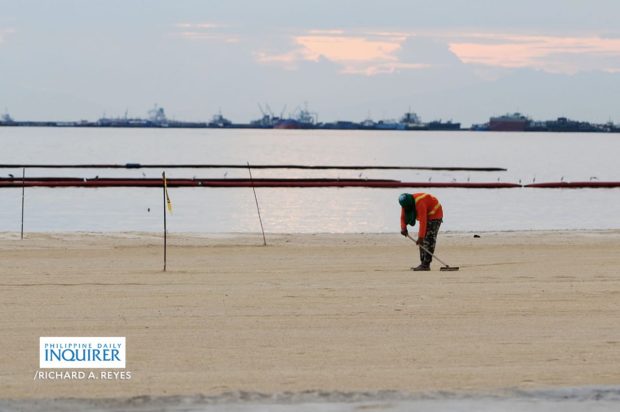 The artificial white sand or crushed dolomite covers the shoreline of Manila Bay near the US Embassy portion on Roxas Boulevard, Manila on September 18, 2020 as part of the government’s rehabilitation plan. INQUIRER FILE PHOTO / RICHARD A. REYES

MANILA, Philippines — Manila Bay’s so-called dolomite beach has been reopened to the public on the first day of implementation of alert level 3 on Saturday in Metro Manila.

The beach attraction, which earned criticisms from some sectors, is now guarded with white picket fence with an arch greeting visitors at the entrance. The beach was earlier ordered closed to complete the redevelopment.

Last year, the government put an overlay of mounds of artificial white sand on a part of the bay’s naturally gray shoreline, that is now being maintained to retain its “white sand” and cleanliness in the area.

Marshalls from the Department of Natural Resources were also deployed in the area to remind visitors of the health protocols that are being imposed.

Around 300 people are only allowed to enter at a certain time to maintain social distancing, avoid overcrowding, and abide by the limited capacity.