PNP: At least 5 groups may be into Pogo-linked kidnappings | Inquirer News 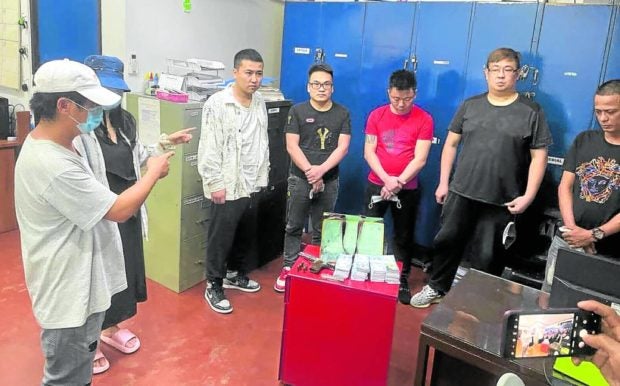 KFR SUSPECTS A Chinese woman (partly hidden) and a male complainant point to four of her compatriots, all employees of a Philippine offshore gaming operator, and their alleged Filipino accomplice, tagging them as the group who abducted her in Pasay City on Sept. 14. The five suspects were arrested in Parañaque City the following day by members of the Criminal Investigation and Detection Group of the Philippine National Police. —PHOTO FROMCIDG-PIO

MANILA, Philippines — The Philippine National Police is expecting a sharp decline in kidnap-for-ransom attempts that target Chinese workers of Philippine offshore gaming operator (Pogo) companies, after the arrest of some “Chinese gangsters” being linked to at least five crime syndicates believed to be operating in the country.

On Thursday, the PNP’s Criminal Investigation and Detection Group (CIDG) arrested five Pogo workers, four of them Chinese, following an operation to rescue a Chinese woman who was abducted on Sept. 14 in Pasay City.The five are now in custody facing charges of kidnapping and serious illegal detention, robbery extortion and possession of firearms and live ammunition without a license.

The suspects were identified as members of the Zi Criminal Group, a syndicate linked to kidnappings and illegal detention of Pogo employees in the southern part of Metro Manila, according to a February report of the PNP Directorate for Intelligence.

The syndicate is one of “more than five groups” involved in Pogo kidnappings, based on police intelligence, according to Col. Hansel Marantan, chief of the CIDG-National Capital Region (NCR).

Their driver, Ernesto Cruz Jr., a Filipino, was also arrested.

Marantan said the operation was launched after Jerry Go, who is Chinese, reported to the CIDG that his friend, Amy Dan Li, also Chinese, was taken by men at around 5 p.m. on Wednesday from her condominium unit.

At 5 p.m. the next day, CIDG operatives succeeded in intercepting the exchange, rescuing Li from a gray van used by the suspects. They arrested Chui and Cruz inside the vehicle and recovered a .45-cal. pistol and the ransom from the Chinese suspect.

A followup operation two hours later led the CIDG operatives into a Pogo office located at the Parañaque Integrated Terminal Exchange, where they arrested the three other Chinese, who were positively identified by the victim as her abductors.

CIDG director Brig. Gen. Ronald Lee said the successful operation was the latest in a series of positive developments against Pogo kidnappings.

In the past two weeks, the CIDG has arrested 15 Chinese nationals, with the first operation involving eight individuals who were armed with high-powered firearms when they were caught.

“The forecast should be – the kidnapping cases should go down [after the arrest of the Chinese suspects],” Lee said.

According to the CIDG chief, the Philippines became a hotbed for Chinese gangsters after they were forced to shut down operations in Vietnam and Cambodia when the two countries outlawed Chinese-backed online gambling and overseas casinos – similar to Pogos – to safeguard security and public order.

Lee warned Chinese working in the Philippines to think twice before engaging in serious criminal activity.

“I have instructed my operatives to not go easy on you, otherwise, you’ll suffer a greater consequence for your offense within the bounds of the law. The CIDG is committed to arresting and deporting these heinous criminals to put an end to their criminal activity,” he said.

According to Lt. Col. Mark Gatdula, head of the CIDG-NCR’s southern district field unit, the syndicate’s “modus operandi” involves the HR officer of a legitimate Pogo offering a job with higher pay to potential victims, usually other Chinese working for other Pogos.

Once the victim agrees to a swab test as part of work requirements, he or she will be abducted, detained and forced to work at the Pogo located in the southern part of Metro Manila.

In this way, the syndicates earn more – by poaching from other Pogos without having to train and arrange travel for the Chinese worker, or by receiving ransom in exchange for the victim’s freedom.

Gatdula said he could not disclose more information on the group, headed by a certain “Golden Lady,” based on details provided by one of the suspects during interrogation.

Investigators said Gang and Juanico were in a blue sedan when they were flagged down by Clark police at around 1:30 a.m. Thursday in front of Clark Hills Village, an area with a sizeable Chinese community, whose members work for Clark-based Pogos.

When requested to lower the car windows, security personnel saw in plain view a 9-mm. Daewoo pistol and a pair of handcuffs beside the driver’s seat.

CDC police held the vehicle and called the CIDG field unit in Angeles and Mabalacat City Police Station to arrest the suspects.

Lee said Gang was “connected” to a group that recently abducted and detained 43 Chinese to force them to work for a Pogo company in nearby Angeles City. The victims were rescued on Wednesday, and the police arrested a Chinese man, Chen Yi Ben, an HR worker for a Pogo.