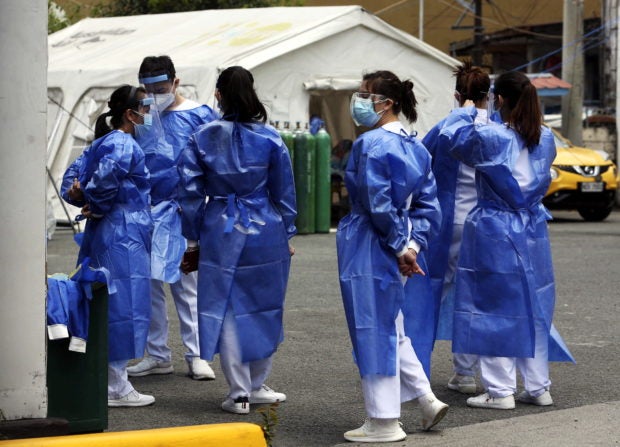 FILE PHOTO Medical workers in their PPEs get ready for their shift at the Santa Ana Hospital in Manila. INQUIRER/ MARIANNE BERMUDEZ

MANILA, Philippines — Barely a week after the government issued an order making the wearing of face masks optional outdoors, the country’s COVID-19 positivity rate jumped again to 16.4 percent — up from just 13.2 percent in the previous week.

In a statement, the Department of Health (DOH) said the increased positivity rate has resulted in a moderate risk classification for some local government units (LGUs) in the National Capital Region (NCR).

DOH however did not yet release which LGUs are under moderate risk now.  However, it gave assurance to the public that healthcare utilization is still manageable, at just 50 percent.

The department also vowed to monitor the situation, noting that the last time NCR was placed under a moderate risk was on September 3.

“DOH is closely monitoring the situation and working closely with the LGUs through the Metro Manila Center for Health Development. It was on September 03, 2022 when NCR was last under moderate risk case classification,” it noted.

Last August 14, analytics group OCTA Research said that the positivity rate for Metro Manila was at 16.4 percent also — but that was a decrease since the slight uptick in cases observed a few months ago, with the emergence of the BA.5 Omicron subvariant.

Prior to that week, the positivity rate was at 17.5 percent.

The uptick in infections came after the national government allowed the optional wearing of face masks in uncrowded situations outdoors.

The Department of Tourism (DOT) initially mulled the relaxation of masking protocols during the state visit of President Ferdinand Marcos Jr. in Singapore — a country that has already allowed the non-wearing of face masks except in high-risk settings like hospitals and public transportation.

Last Tuesday, infectious diseases expert Dr. Edsel Salvana said that the risk of higher infections with the relaxed masking rules are expected, but it is the way to go if the government wanted to cope with new normal scenarios.