SSS announces delay in release of benefits, pension due to central office fire 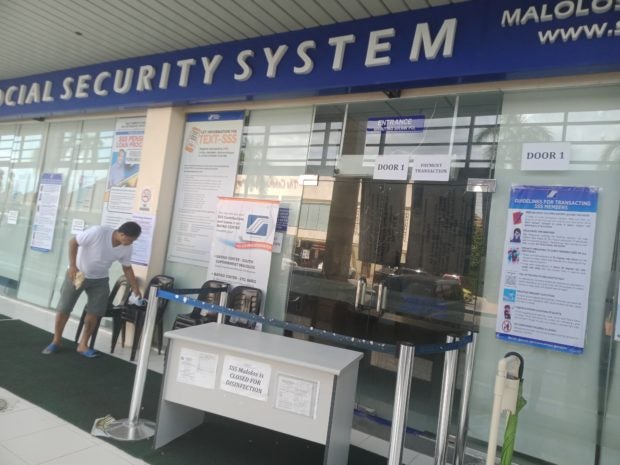 The Social Security Services office in the City of Malolos is closed for disinfection after eight of its employees were exposed to a COVID-19 patient. Photo by Carmela Reyes-Estrope

MANILA, Philippines — The release of benefits and pensions of Social Security System (SSS) members that were processed from August 25 would be delayed due to the recent fire that affected its central office in Quezon City, the state-run insurer said.

SSS said in a statement on Friday that the connectivity between its servers and participant disbursement banks had been affected by the fire last August 28.

“The Social Security System (SSS) informs its members, pensioners and the general public that there will be a delay in crediting of benefit proceeds and pension for those processed from August 25, 2022 onwards because of the ongoing restoration of the connectivity between its participating disbursement banks and the SSS’ servers,” SSS said in their advisory.

“This is due to a fire that broke out at the UPS Room located at the ground floor of the SSS Building in Quezon City last August 28, 2022,” it added.  “The SSS is asking for patience and understanding for this current situation while all concerted and immediate efforts are being made to restore the crediting back to normal operations.”

No injuries or death was reported during the fire that broke out at the central office along East Avenue in Quezon City’s Barangay Pinyahan, but the damage to property was initially estimated to be worth P700,000.

Initially, SSS said no member data records were affected during the fire.  However, online applications were down as the systems were being tested after the fire affected the UPS room.

SSS however said that members can already use the SSS portals and applications as they have been fully operating since September 1.

Also, SSS noted that the first batch of pension credits for September 2022 have been processed already by the Development Bank of the Philippines.  But due to a technical problem with the second batch of pensions, DBP will process its crediting on September 16, and would be transferred to the members’ accounts on the same day.

“Online filing through the My.SSS portal is now in full operation effective September 1, 2022. Members can already submit their benefit claims applications using the said portal,” it added. — With reports from Lyka Farillon, trainee