Marcos tells BTA: Gains in BARMM impressive, but more remains to be done

MANILA, Philippines — President Ferdinand “Bongbong” Marcos Jr. acknowledged on Thursday the progress gained over the years at the Bangsamoro Autonomous Region in Muslim Mindanao (BARMM) but reminded the officials of the region that this is just a start of a long work ahead.

Marcos graced the Inauguration of the Bangsamoro Transition Authority (BTA) Parliament in Cotabato City. He said that the achievements enlisted by Bangasmoro Chief Minister Murad Ebrahim in his own speech are impressive — including the passage of key legislation that would allow the area to govern itself.

The new BTA would serve a three-year term, from 2022 to 2025 or before the Bangsamoro elections.

“At this point, we noted the gains as the Chief Minister had enumerated them in his own message. You have already accomplished a long list of achievements, starting with the approval of the Bangsamoro Transition Plan, and the passage of the most important legislation such as the administrative code, the civil service code, and the education code. These are cornerstones of BARMM moral self-governance,” Marcos said.

“But nonetheless, no matter how impressive the gains of the Bangsamoro have already seen, I always think this is just the beginning,” he added. 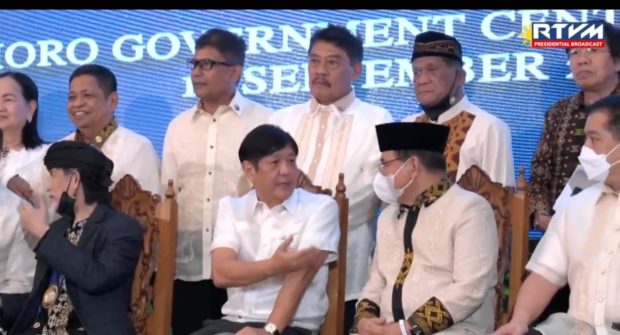 According to the Chief Executive, what happens at this early stage would be just a glimpse of the future.

“As we go on and we formalize the structure and institutionalize the functions of the Bangsamoro government, we will see that those efficiencies will come in and what we had celebrated today and at the very beginning of the existence of the BARMM, that what we had celebrated, we will now look upon as only a glimpse of what will happen in the future,” he said.

“The establishment of your offices, their functions, I look forward to the fulfillment of your vision to realize a united, enlightened, self-governing, peaceful, just, morally upright, and progressive Bangsamoro,” he added.

On the national government’s side, Marcos assured that the BARMM would continue to enjoy their support — proof of which was the Department of Budget and Management’s allocation of P74.4 billion for Bangsamoro in the proposed 2023 national budget.

“Through the Pamana program, we provide socio-economic interventions that build a culture of peace in highly conflict-affected and vulnerable areas. The government has allocated more than P19 billion for the period of 2017 to 2022 in this endeavor — and we will ensure the completion despite delays caused by the COVID-19 pandemic,” Marcos said.

“Additionally, the government through the Department of Budget and Management has allocated P74.4 billion for the Bangsamoro Region fiscal year 2023,” he added.

But in return, Marcos asked the Parliament to pass crucial legislation “on fiscal policy, particularly taxation, and to facilitate the conduct of the elections in the BARMM in 2025” — an aspect that the BTA has been preparing for.

“As your President, I assure you — the BTA, and all the Bangsamoro people — of this administration’s full and unwavering commitment to the peace process and to BARMM. This is why we are steadfast in our commitment to the peace process here in southern Philippines. So we push for socio-economic development, interventions to promote peace and development in areas affected by decades of conflict,” he noted.

Marcos arrived in Cotabato City to witness the inaugural session and the election of officers of the BTA. Bangsamoro Wali Sheikh Khalifa Nando, the ceremonial head of the BARMM interim government, opened the session with Ebrahim as the presiding officer.

Lawyer Pangalian Balindong was reelected unanimously as Speaker of the Parliament.

“We cannot fail because our people have suffered enough. It is only through our unity that we can repay the blood that our brothers and sisters had spilt in order to achieve their dream towards peace, progress and right for self-determination,” Balindong said in his message.

Marcos’s attendance is a positive indication of the national government and the BARMM’s relations, especially as the issues hounding Bangsamoro were not mentioned in the State of the Nation Address (Sona).