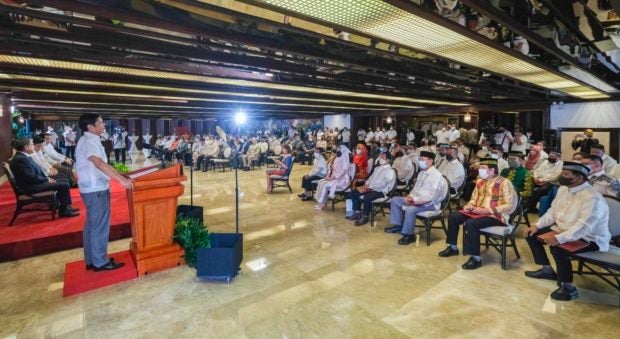 Interim Chief Ahod Ebrahim of the Bangsamoro and Member of Parliament Mohagher Iqbal have expressed their optimism at the possibility of the president attending the inaugural session in Cotabato City, the seat of the Bangsamoro government.

The Office of the President still has to make an announcement whether or not it would push through, Secretary Carlito G. Galvez, Jr., the Presidential Adviser on the Peace Process, on Saturday told reporters in this city.

“We are hoping the President will come,” Iqbal told reporters.

“We have requested that the President be present in this very important event of the parliament,” said Iqbal.

Iqbal was among the Bangsamoro leaders who met with national officials led by Special Assistant to the President Secretary Antonio Ernesto F. Lagdameo Jr. in a meeting Sept. 10 at the Presidential Guest House in Panacan here.

Galvez described the closed-door event as a “social meeting,” where Lagdameo gave the President’s guidelines and expectations from the Bangsamoro and discussed other issues relevant to the new government in the BARMM.

It was during the media briefing after the three-hour closed-door meeting that Lagdameo and Interior Local Government Secretary Benjamin Abalos Jr. told reporters the possibility that the President would attend the inauguration of the new BTA members although nothing was final yet.

Galvez said the Office of the President would make the announcement.

Galvez said Secretary Lagdameo relayed during the meeting the directives of the President on four important issues, which included the BTA’s passing of all the basic laws that would govern the Bangsamoro; such as the Local Government Code, the Electoral Code, the Revenue Code, among others; the performance of the regional government; the distribution of resources to provinces, cities, and barangays; and for the BTA to work double time to produce results before the transition period ends in 2025.

“The President said three years would be so fast and that, it is important to be able to provide enough services to the people,” Galvez said.

He said Lagdameo also relayed the president’s directive to accomplish all the programs that the BTA had been tasked to accomplish to prepare for the 2025 regional elections.

Galvez confirmed they had discussed the initial details during the meeting but declined to elaborate more. “We discussed the details, but I cannot elaborate kasi may mga discussions pa regarding sa funding and quota na ibigay ngayong taon (because we are still discussing about the funding and the quota that will be opened this year),” he said.

Iqbal also confirmed that the constitution of the Bangsamoro police was also discussed during the meeting, but the implementation details would have to be discussed with the National Police Commission and BARMM officials in the next meetings.