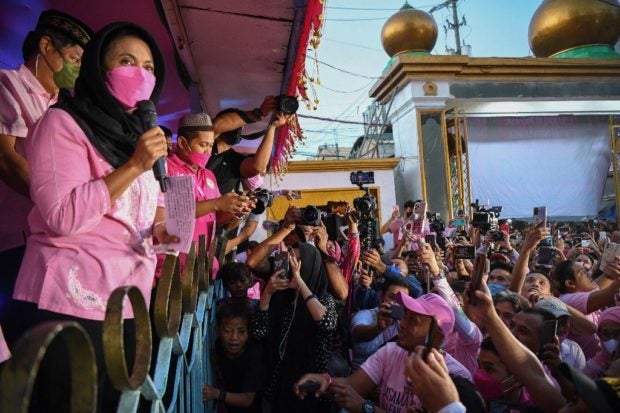 Philippines’ Vice-President and opposition presidential candidate Leni Robredo (C) wearing a hijab, speaks at the Golden mosque grounds in Manila on April 22, 2022, as she joins in the breaking of the fast with Muslim Filipinos. (Photo by Ted ALJIBE / AFP)

The announcement came over a month since Robredo visited the Bangsamoro Government Center in Cotabato City, where Bangsamoro Minister of Education Mohagher Iqbal and Minister of Interior Naguib Sinarimbo confirmed that they are not yet prepared to endorse a specific candidate.

Iqbal said in an ambush interview shortly after Robredo’s visit that they are giving other candidates a chance to present their own platforms.  Back then, only Robredo and Manila Mayor Francisco “Isko Moreno” Domagoso had given their platform to the parliament.

But there were indications from Bangsamoro officials like Iqbal that it would not endorse certain candidates: a day after Robredo visited the Bangsamoro Government, Iqbal gave a privilege speech urging his fellow officials to refrain supporting a candidate who may bring back horrors that the Moro people experienced in the past.

While Iqbal did not mention names, only former senator Bongbong Marcos has links to the abuses that the Moro people endured — by virtue of his relationship to his father and namesake, late former president Ferdinand Marcos.

The older Marcos, who imposed military rule for over 20 years during his two decades regime, has been deemed responsible for the attacks against Moros in Mindanao — from several abductions and massacres, some of which remain unresolved up to now.