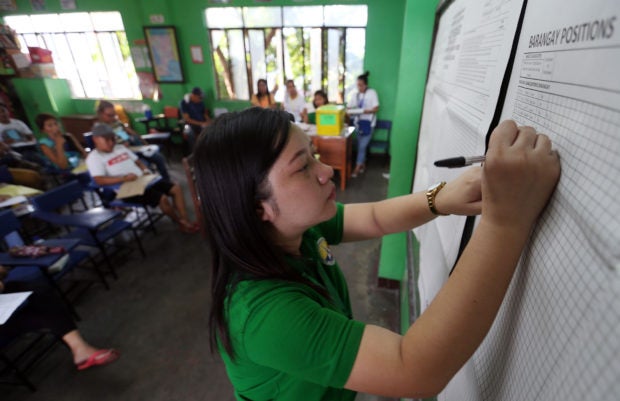 The proposed postponement of the elections scheduled on December 5, 2022, is contained in Senate Bill 1306 which Marcos reported out in the plenary as head of the Senate committee on electoral reforms and people’s participation.

In her sponsorship speech of the bill, Marcos admitted that she lied when she promised three years ago that the repeated postponement of the barangay and SK elections would be the last at that time.

“Today, in the immortal worlds of the late great Senator Miriam Defensor Santiago, let me confess just as she did: I lied. I lied,” she said.

Marcos then lamented that since 1989, every barangay election has been postponed “resulting in an actual extension of term averaging four to five years.”

“Hence, I proposed that the term of barangay and SK officials be finally extended to six years and permanently fix their elections every May, the year following presidential elections,” she said.

The senator was referring to Senate Bill No. 1195, which she filed last month proposing the said extension of term and fixing the dates for both barangay and SK elections “for good.”

Marcos noted that the current three-year term for barangay officials is insufficient to serve their constituents.

Moreover, the lady senator likewise lamented the costs that each barangay and SK elections entail, supporting her call for term extension to avoid frequent polls.

(I cannot accept, as an Ilocano, the expenses allocated for each election. It is just manual polls, not automated, but the cost reaches billions. In these hard times, shouldn’t we save?)

Marcos also noted the higher budget that the Commission on Elections (Comelec) would need if polls would be postponed.

Earlier, Comelec chairperson George Garcia said that they will need a budget of P18.4 billion, should the barangay and SK polls be deferred to December 2023.

The requested budget is 218 percent higher than this year’s budget for barangay and SK elections amounting to P8.4 billion.

The larger cost, according to Garcia, will allow more voters to register which will need more precincts, poll workers, and supplies.

Marcos, however, found the figure unmerited.

“In particular, the feasibility of abolishing the Pederasyon ng Sangguniang Kabataan at the barangay level, only maintaining it at the city and municipal levels,” she suggested.

“Ironically, the good intention of our first anti-dynasty legal provision contained in the SK charter disqualifying relatives up to the second degree of consanguinity or affinity to any incumbent official has rendering ineligible a large class of voters, particularly in the small barangays of 200, 300, 400 voters where almost everyone is blood-related or by marriage,” she explained.

For Marcos, a single SK representative, instead of an SK federation, in every barangay and municipal council should be examined.

“Thus, this proposed election postponement is a means to buy us time for a series of measures that the committee on electoral reforms and people’s participation is proposing to Congress,” she pointed out.

“This is merely a preliminary measure to give us time to study and debate the deeper issues confronting the barangay and SK systems under our present law,” she also said.